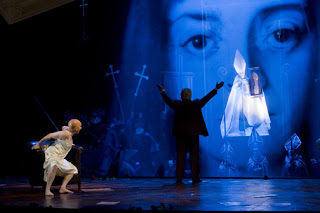 I am finding this article about Die tote Stadt interesting. Not the stuff about the parallel to the Pre-Rafaelites which may or may not be valid. The period is sort of right, and it's true, the hair of the lady in the painting and the hair in the production go together. Is that hugely significant?

No, my interest was in the idea that the happy ending weakens the opera. It isn't exactly happy, after all. He just decides he would rather not be an obsessed idiot. I have reached the age when I wish I had not been an obsessed idiot, and had paid more attention to what was going on around me.

The idea is that our hero Paul needed a Liebestod to give the opera its proper force. He could still decide not to be an obsessed idiot, but he could do it with a lot more dramatic significance and operatic style. Such a Liebestod would have to be to the dead wife, not the living woman who looks like her. It would be sort of a "bye, sweetie--I loved you, but I have to go on living now" sort of thing. Not very significant or dignified or acceptably masculine.

I think Korngold was attracted to the perverse parts of the story and deliberately emphasized them, particularly the anti-religious religious symbolism. In the twentieth century it is perversion that attracts us. Schoenberg had a grandiose scheme about the character of God in mind for Moses und Aron, but quickly lost interest once the perverse parts were over. Berg's widow tried to protect her dead husband's reputation by suppressing the more perverse parts of Lulu. These were the things people thought of as opera at that time.

I think Korngold was a child of his era--the era of the early twentieth century, not the era of the Pre-Rafaelites--even if his music goes all the way back to the 1870's for its style. Once the hero realizes it was all a dream, he wants the end to come quickly.
Posted by Dr.B at 1:12 PM

Email ThisBlogThis!Share to TwitterShare to FacebookShare to Pinterest
Labels: Korngold