As a farewell to music director Donald Runnicles, the Verdi Requiem was performed in the San Francisco Opera house last night.

It was OK, I guess, perhaps precisely suitable to represent and celebrate the tenure of Runnicles.

In the note in the program, he talks about his rapport with the San Francisco Opera orchestra, as if the orchestra was the main thing. In the Requiem he coddled and indulged them, brought out heretofore unheard details in the orchestration, while ignoring and even inhibiting the flow of the vocal line.

When do you have a great Verdi Requiem? When they really wail. The piece never hit its groove. Stephanie Blythe was disappointing. I got into bass Andrea Silvestrelli a bit--he came as close to wailing as anyone in the room.
Posted by Dr.B at 4:18 PM No comments: 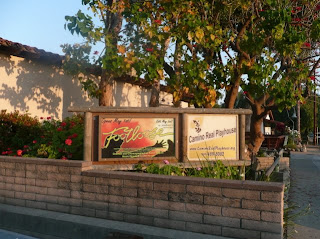 For personal reasons I went south to see Footloose at the Camino Real Playhouse in San Juan Capistrano.

Before going I saw the movie, an oddly dark and depressing piece. The songs were all done as background. 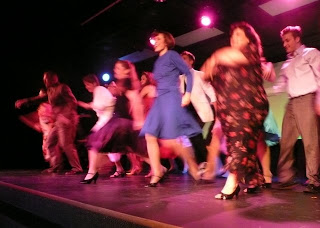 It was a relief to see the musical which is about normal teenage rebelliousness in a small town. 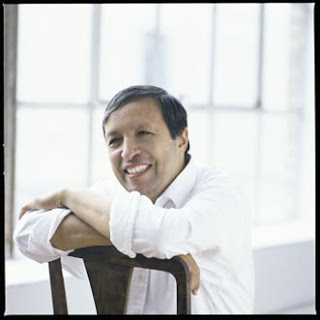 I am visiting the child of two pianists, and both of her parents loved Murray Perahia. The concensus is that he is absolutely without ego. If you love Vladimir Horowitz or Glenn Gould, Murray Perahia is the opposite. His Bach is especially nice. Every note is part of the phrase.

And what is the secret of music? Knowing where every note goes. Every note must live. Every single note is important and has its place in the musical phrase. This is where I went mad for Cecilia Bartoli. For a pianist this is understood and expected. For a singer it is very unusual. She does this.
Posted by Dr.B at 8:47 PM 1 comment:

Email ThisBlogThis!Share to TwitterShare to FacebookShare to Pinterest
Labels: About Phrasing, Not Opera

My door to classical music came through Bach, Brahms, Schubert and Mahler, and not through opera. As an opera blogger, I am somewhat bogus. I enjoy the opera, but am just as happy to see a Messiaen organ concert or Lieder recital. My supply of adjectives is inadequate. I have said something was "nice" 135 times. This is versus 125 "wonderful" and 28 "exciting." I have called something "boring" 30 times.

In my life I have been a true fan of only one singer: Cecilia B*rtoli. I still love her, but find it discouraging to love a public figure this much. I added the * so it wouldn't google. Jonas K*ufmann and Anna N*trebko are pleasures and enthusiasms, but I don't love them.

Perhaps I am bored with blogging. To be any good at it I would have to work much harder. I started up Facebook and am having fun with that. One is never required to be intelligent there. Perhaps one isn't anyway. It might provide a better outlet for my meanderings off topic.

I notice the people who are most successful at opera blogging generally emphasize style over substance. This is not to be construed as a criticism. It may be that I haven't sufficient style. I am a nerd very deep down and am unlikely ever to change.
Posted by Dr.B at 1:13 PM No comments:

Email ThisBlogThis!Share to TwitterShare to FacebookShare to Pinterest
Labels: +70, Blog

I Capuleti e I Montecchi 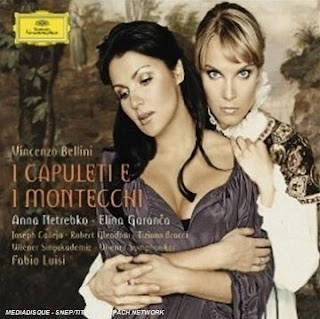 I have bought this. It is wonderful to be hearing so much Bellini. Except for Casta Diva he is more or less a new thing for me. Elina Garanča is amazing in this. Paired with Anna Netrebko the sound is exquisite. And it's a concert recording. Bella. 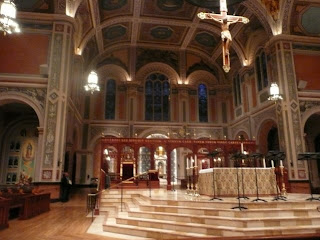 On May 4 I attended a concert of Greek liturgical music in the Sacramento Cathedral of the Blessed Sacrament. As a young person, I sang here for the Christmas midnight mass, and I remember the cathedral interior as dull and gray. You can see from the photograph that this has all changed. We were curious to see that they have put in a rood screen.

The concert is intended as a celebration of the millennial anniversary of the founding of the Abbey of Grottaferrata in the hills near Rome. Though part of the Roman Catholic Church, the monastery holds its services in the Byzantine Rite. That means that the music is all sung in Greek.

I am doing the best I can to interpret the program notes. Music in the Byzantine tradition was not part of my extensive education. The professor in charge of the group, Alexander Lingas, is currently a lecturer in music at City University in London. The group, Cappella Romana, is said to reside in the Pacific Northwest. This leads me to believe that none of them actually reside at the Abbey of Grottaferrata, but it does say that they have been allowed to perform there. It is necessary to read the fine print very carefully to figure out what is actually going on.

The music is transcribed from neumatic notation according to ancient Byzantine tradition. It doesn't sound at all like Gregorian chant. Of the chant styles that I have studied, it sometimes resembles melismatic organum. There are drones. There are ornaments in an eastern style. There are syllabic hymns. Is this making any sense? It was all quite new to me.

From the things I read it seems there has been an ongoing tradition of interpreting the Byzantine neumes, something that does not exist in the west. The present day performance of Gregorian chant is entirely conjectural and probably grossly oversimplified.

The Cappella Romana is entirely men with no falsettists, resulting in a dark, somber sound. I enjoyed very much the ornamental singing by the soloists. It's pleasing to realize that there are things one knows absolutely nothing about.

I picked out the ones I like. In the last one Kaufmann is with Kasarova in the Zurich Carmen. 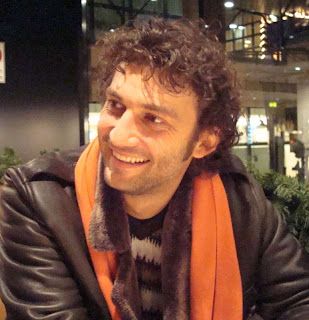 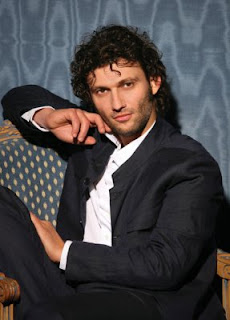 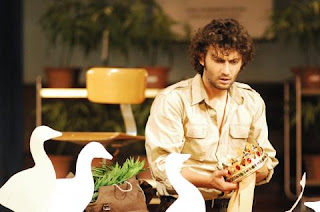 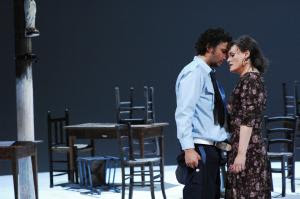 I was sitting in Java City this morning having coffee with my friend Jean, ranting on and on about Jonas Kaufmann and what a genius he is, when I realized I don't really do that here. It was fun translating the very intellectual interview with him, hearing him talk about his own voice with such amazing self-awareness that made any comment I might have seem completely trivial. Is it necessary for me to say that I completely concur?

No one pays the least attention to my opinions. Take for instance my constant drone on the subject of Rolando Villazon. Let's just say he needs to acquire some self-awareness before it's too late, if it isn't already.
Posted by Dr.B at 5:09 PM No comments:

Everything in the Metropolitan Opera simulcasts had flaws this year. 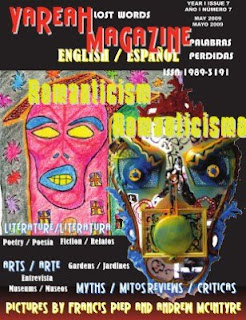 A chapter of my history book has been printed in the May issue of Yareah.com. Imagine that!
Posted by Dr.B at 8:21 AM No comments:

Now you see him: 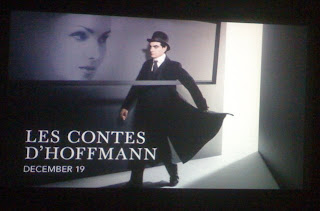 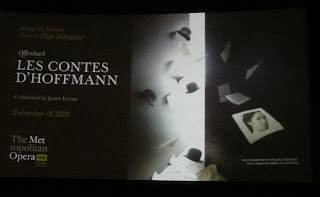 Anna Netrebko is singing Antonia. So no barcarole with Elina Garanča.
Posted by Dr.B at 8:19 PM No comments: 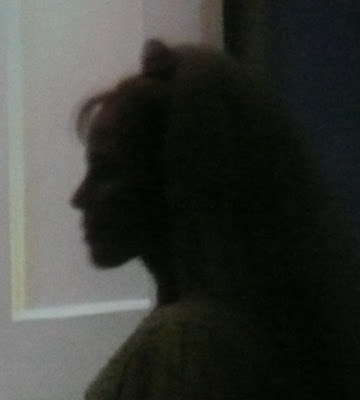 Because it was Cecilia Bartoli's main vehicle early in her career, Rossini's La Cenerentola is probably the piece of music I have listened to most. The ensembles are wonderful. Riccardo Chailly, the conductor on Cecilia's recording, is fabulous, and I would have to say based on the Saturday simulcast from the Met of La Cenerentola and last year's Barber of Seville that Maurizio Benini is, too. There were occasional minor disconnects between the singers and the orchestra, but generally it was very fine.

The production by Cesare Lievi was created for Bartoli's debut at the Met, but I don't think I'd seen it before. It has certain features in common with the Zurich production I did see.
In Zurich the outfits of the male chorus lit up. Except for the bowlers, the costumes were different. In Zurich there was no wedding cake, a pretty silly addition it seemed to me. 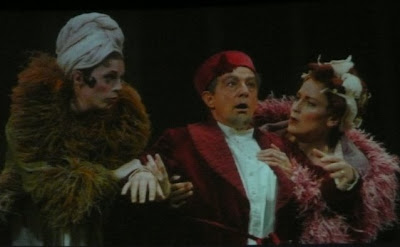 The simplicity of the production made it easy to follow the plot. When the Met decides to use a European production, it makes certain changes, typically including changing the costumes to a more conservative earlier period. That appears to be what has happened here.

Alessandro Corbelli as Don Magnifico was magnifico and much less annoying than anyone else I have seen in this role. He is a buffo bass, did Gianni Schicchi last season, and explained in the interviews that he plays comic roles seriously. He is very talented in his Fach. 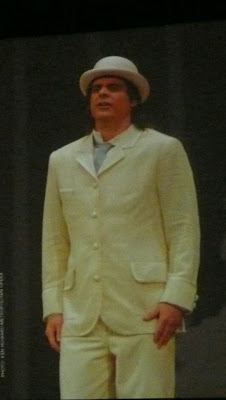 Alidoro / Angel was also very pleasing in the person of John Relyea. Is there anything he can't do? 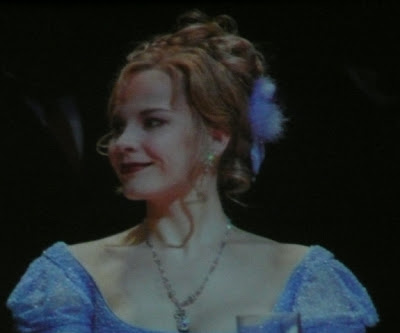 Elina explained in her interview that she is moving away from Rossini--which based on this example she does very well--to Romantic repertoire. I hope she will stick with Bellini. 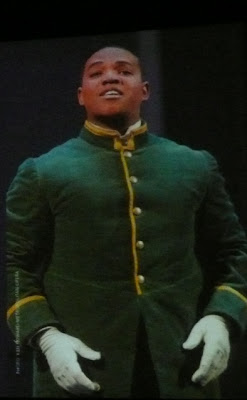 Lawrence Brownlee. I had never heard him before. Oddly, the part actually sounded a bit low for him. In his low register he sounds almost like a baritone--far more than Jonas Kaufmann in my opinion--but his upper register just won't quit. He has astounding ping in his high notes. It would be interesting to hear him in some Rubini repertoire. Please understand that I am describing and not criticizing. His coloratura is very natural for a tenor.

Elina and Lawrence were on the same page musically and together made a beautiful Cenerentola. Of course, she is much too gorgeous for him, but perhaps Angelina sees things differently.
#ad

There's a new Twitter game where you reduce an opera plot to a very short sentence or two. This sounds like something I used to do with movie plots. My favorite was:

Man's marriage is in trouble for messing up family room. Chandelier appears over mountain in Wyoming.

It was a long time ago when I did this.

1. Two idiot girls can't recognize their own boy friends in mustaches. Or?

Does this game only apply to comedies?

2. Japanese girl really believes American sailor will return for her.

3. Young Bohemian poet in Paris has girlfriend with fatal disease.

Maybe I don't have the idea exactly. Or maybe opera plots are just not that complicated.

I have a feeling I'm not getting it.

6. Idiot man thinks people win at cards because they know which cards to bet on.

I'm getting the feeling we aren't going to the opera for the plots.

8. Excellent guided tour of Rome includes a service at the church of Sant'Andrea della Valle, private apartments in the Palazzo Farnese, and a panoramic view of the city from the top of the Castel Sant' Angelo.

9. Original version of Scent of a Woman. Man isn't blind but can still smell them coming. Women all seem to get pissed afterward.