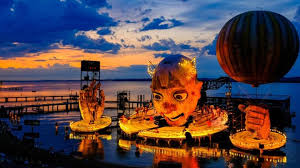 There is a film of Verdi's Rigoletto from Seebühne, Bregenzer Festspiele, Bregenz from July 19, 2019, on Opera on Video. There is nothing in the outdoor setting at Bregenz on Lake Constance to provide reflecting surfaces for the singers' voices, and as a result they are miked.  This cannot be helped.

The setting is amusing.  The clown's mouth opens and The Duke is inside with the girl friend of the moment.  Gilda at home with Rigoletto is carefully chained to the clown's right hand to prevent her from falling.  It's all very lively looking and frightening. Gilda then sings "Caro nome" from the basket hanging below the balloon while the giant clown looks up at her.  I liked Mélissa Petit quite a lot.

Our Rigoletto is possibly a bit feeble minded.  I've always seen him played as though he only tried to be funny for the Duke, and was dark and angry the rest of the time.  The kidnapping of Gilda from her basket in the sky is far more exciting than I've ever seen before.  Only one man makes it up to her location, and she fights to knock him off, almost succeeding.  He cheats and chloroforms her.

The Duke sings from the top of a ladder, and Gilda is dragged around like a rag doll.  Perhaps she is an acrobat, or has a stunt double.  The big eyeballs come out and roll around.  If you find your opera stagings boring, this is not in that category.  It's a bit scary for me.  This is Rigoletto at the circus, which makes more sense than Rigoletto in Vegas.

I could go either way with Stephen Costello's Duke.  I see that he has sung it all around the opera world.  It seems a bit heavy for him but otherwise quite good.

Modern opera is all theater and only occasionally good singing.  Do people really require that much distraction today?  Perhaps.
#ad 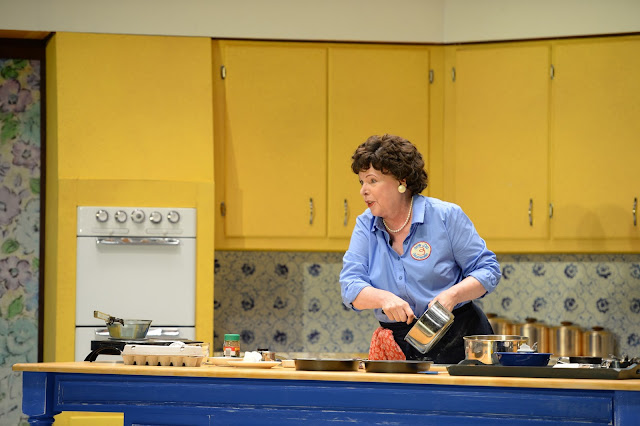 Here is the official menu for the evening, provided by the chefs at the Iowa Culinary Institute:

It may not be possible to describe this.  The accompaniment is on the piano.  The musical style can be described as modern recitative.  "If you have a self-cleaning kitchen like mine," she says.  This is because invisible gremlins scurry around and fix any problems.  In Julia's version we never saw them.

It is utterly charming, a bit more manic than Julia herself, but loads of fun.  She whips her egg whites into perfect peaks.  It runs 30 minutes like a real television show.  They're putting it on YouTube, so look for it.

I have recently begun to complain about the absence of American opera on streaming platforms, so take advantage of this rare opportunity.  It's coming to Opera Parallèle in the Bay Area in the new year.

Apparently Julia Child is relatively unknown outside the United States.  Besides being a television star, her main claim to fame was that she translated European recipes into the measuring systems used in the US. 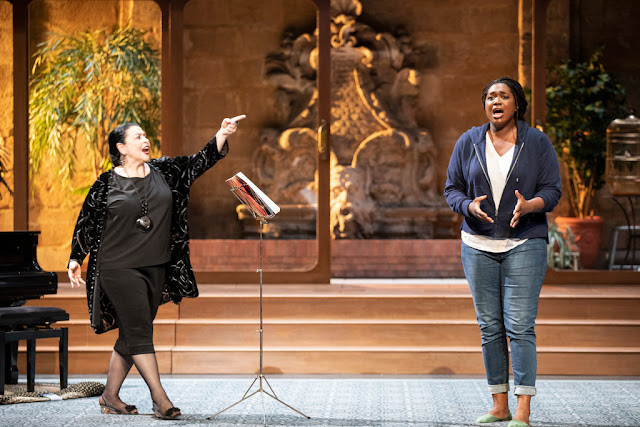 I was curious about the Tosca from the Aix-en-Provence Festival.  It was advertised to have two Toscas.  Well.  If you have spent enough time in show business, you recognize that this is a rehearsal being held in the home of the great Tosca from the past Catherine Malfitano.  She is most famous for her part in the movie of Tosca with Placido Domingo filmed entirely in Rome in the real places identified in the score.  Her home is filled with memorabilia from this great performance.

At the end of Act I instead of kneeling before the altar, they kneel before the picture of Catherine.  Angel Blue sings Tosca but plays herself.  She is coached by Catherine.  It's chaotic.  Most professionals know how to behave better than this.  Perhaps they're students.  The chorus members mob around the great lady, seriously scaring her.

After the first act, the feed begins to buzz loudly and does not stop until after Act II has started.  Instead of disappearing from view when they are not in the scene, everyone goes off into another part of the apartment. Do we go to the opera to see people being themselves? I think not.


The film of "Vissi d'arte" has gone, but you can find it in the complete opera film above.  Angel sings the big aria "Vissi d'arte" in her jeans, and suddenly we find ourselves in an homage to all the great Toscas, beginning with Callas and going on to Caballe, Verrett, Tibaldi, and ending with Catherine herself in her prime.  Today's Catherine confers the ultimate compliment--she gives Angel the Tosca costume to wear.  It was well done.  It asked for comparisons and we consented.

I didn't mind at all the mixing of reality and performance.  It worked much better than La Sonnambula from the Met.  The Diva is overcome with her real emotions.  I have to say I think Angel could have handled the role quite well on her own.  I ended up liking it very much.

Pereira back in the News 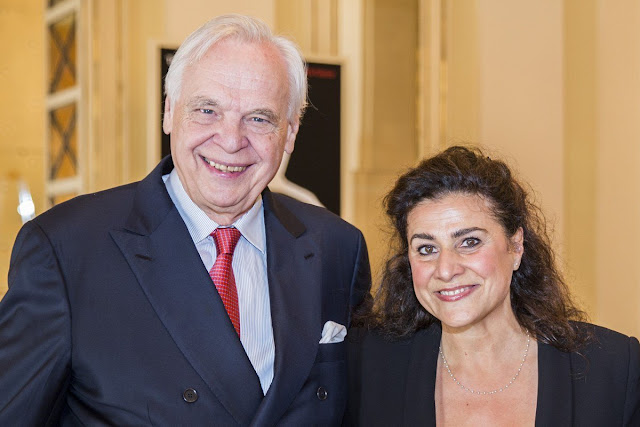 Alexander Pereira left his post in Salzburg to become the Intendant at La Scala Milan.  We discussed this at the time.  The explanation as I understand it was that La Scala needed money, and Pereira had the gift of persuading people to give money.  He had success here.

I am giving you my perspective which could always be wrong.  Pereira was good friends with Cecilia Bartoli whom he knew from his time in Zurich.  He helped her get the Pfingstfest gig at the Salzburg Festival while he was still in Salzburg.  He persuaded her to perform three Baroque operas at La Scala beginning with Julio Cesare this fall.  This is all good.  Everyone is happy.

However, there is another side of the story.  La Scala had more money, but it also had more empty seats.  A sign of this problem is that for the final performance by Lisette Oropesa for her run of Verdi's I Masnadieri at La Scala, they were advertising all over the internet that tickets could be had for half price.  This run was well reviewed.

I noticed a certain amount of Germanification of the repertoire and artists.  Periera is Austrian.  An indication of their unhappiness showed itself when the board of La Scala did not renew Pereira's contract.  In July, 2021, he would be replaced by Dominique Meyer.  Cecilia immediately resigned from her run of Baroque operas in protest.  Pereira asked her to support him, but she replied Anywhere but there.  Here is a more accurate version of the conversation.

The new guy comes from the Wiener Staatsoper, but before that he was in Paris.  I don't know him.  I will refrain from taking sides here.  My strictly outside sense of this is that Italians are very fussy.  The La Scala audiences drove out Muti, and it doesn't get more Italian than that. 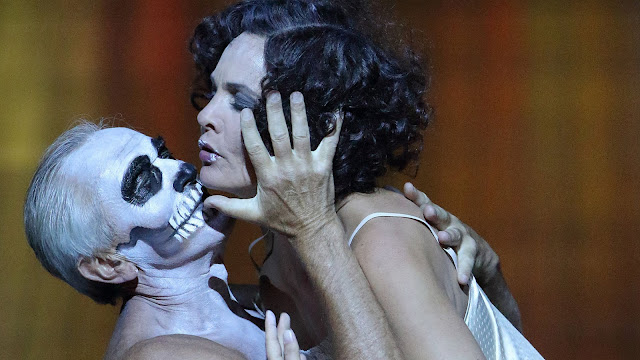 Salome by Richard Strauss streamed today from the Bayerische Staatsoper.  This was an extraordinary production with great depth of imagination.  It was performed in German by the best company for German diction.  A commenter on FB said, "They dock your pay if you make mistakes in your German."  One of the results of this is that while the orchestra is spectacularly musical (Kirill Petrenko), the singers don't bring us the best of all possible Strauss phrasing.  This shifts the focus away from the singing onto the theatrical presentation.  Usually your attention is distracted from the story by either the striptease or the intense lyrical singing of the soprano.  We had neither distraction.

The biggest surprise came when the curtain opened to a countertenor singing the opening song of Mahler's Kindertotenlieder.  Perhaps this is an entertainment for the party.  Or perhaps it is to tell us that whatever we may be seeing, this is an opera about children.

It was Regie, of course, which means there were clothing designs from around 1950, plus something intended to be a swimming pool that is visible when the center of the stage opens up to show Jochanaan's cell.  The singers mention frequently that it's cold, and they would like to go inside.  However, we seem to be in a library.

People smoke, including Salome.  When the opera begins, Narraboth sings about how beautiful the princess Salome is this evening.  Nothing about the women on the stage suggests that one of them is Salome.  The Page is usually a trouser role, but here it is staged as a woman who is in love with Narraboth and jealous of Salome.  Maybe I'm explaining too much.  When she finally sings, we see Salome is the woman in the red dress.

Why is one so fascinated?  Salome herself is clearly too old to be a child.  This is the main problem with this opera in general.  Salome is a teenager who sings like a fully mature spinto soprano.  Maria Ewing destroyed her voice singing it because she made a perfect stripper in the dance scene.  This is a problem without a solution.  Our Salome is not a teenager and also not a spinto.  I'd call her a full lyric.

Herodes is something of a pedophile and wants to see his wife's daughter dance.  Throughout the opera the stage shows a young girl with long dark hair sitting and observing.  She moves from place, has a mother who occasionally approaches her, but does not interact with anyone else.  She sees everything without reacting.  Maybe she's a Salome alter ego.

The dialog clearly states that Jochanaan is young, yet when we see him he is late middle aged.  Why she loves him we do not know.  But does anyone know the why of love?

For her dance Salome dresses as a bride and dances with a man made up as a skeleton:  Death.  It is relatively pleasing.  Animation appears on the wall behind.  They show afterward when the cast goes outside to greet the onlookers in the platz, that the box she is singing to actually has a head inside.  It couldn't be seen on the stream.

Narraboth comes back to life, and so does everyone else.  What is that about?  One is fascinated but not sure exactly why.