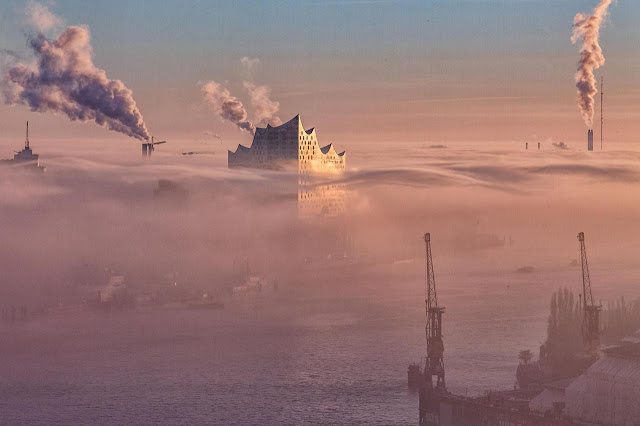 I'm listening to the speeches from the Elbphilharmonie dedication. I understand all of it. All the political leaders are there to dedicate a concert hall in Hamburg.

They have not forgotten Brahms.  We have Sir Bryn, Philippe Jaroussky, Pavol Breslik, Wiebke Lehmkuhl and Hanna-Elisabeth Müller.  The conductor is Thomas Hengelbrok.

We have Philippe Jaroussky speaking German.

There is much discussion about the acoustics.  It doesn't seem to be enough that it has good acoustics, it must have the best acoustics ever.  It is compared to Disney Hall in LA which has completely proved itself.

The program ranges from Praetorius and Caccini to Wolfgang Rihm.  I failed to notice that Pavol had an extended solo in the Rihm piece.  Europeans are still doing modernism which we have long ago abandoned.  Pavol is very brave to take this on on short notice and does a fine job with it.

In other news from Europe Cecilia Bartoli has been made an honorary member of La Scintilla, the original instruments orchestra of the Zurich Opera.
Posted by Dr.B at 12:06 AM No comments: 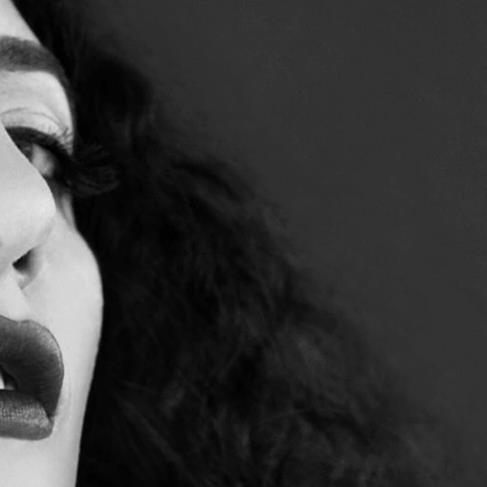 Since I started blogging, I have seen 9 performances of La Traviata from 6 different companies.  The Met, San Francisco Opera and Sac Phil are repeating this in coming performances.  I see that it will also stream from Glyndebourne.  I don't hate the opera, but the reason I would go again would have to be really strong.
Posted by Dr.B at 2:58 PM No comments:

The Four Seasons in Sacramento 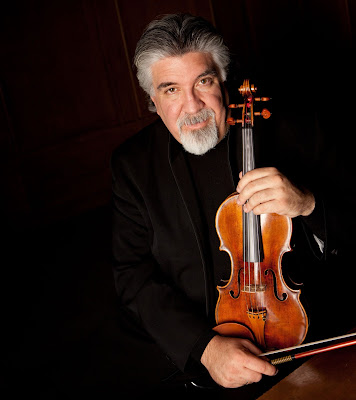 This is the program for last night's performance by the Sacramento Philharmonic & Opera.  Andrés Cárdenes guested last season in a program that featured him playing a Mozart violin concerto.  In the first half of our program the orchestra included winds and timpani and a podium for Rossini and Haydn.  For the Vivaldi all the winds disappeared and the timpani were replaced by a harpsichord.  The podium also disappeared and was replaced by a music stand.

There was a time in the history of the Metropolitan Opera when Gounod's Roméo et Juliette was the most frequently performed opera in the repertoire.  Today's performance reminded us of why this might have been true.  This is by far the most emotionally intense performance of this opera that I have experienced.  Some of this may have had to do with the fact that Bartlett Sher directs it both as a play and as an opera. 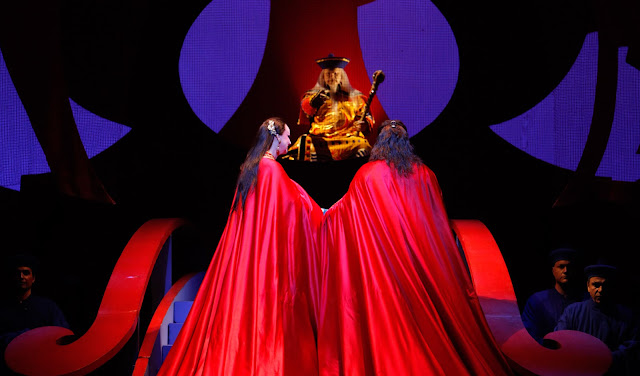 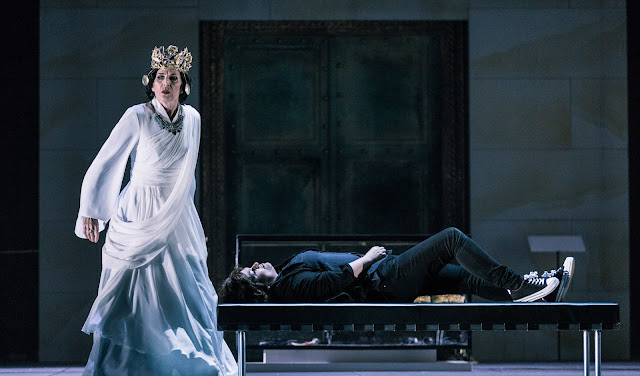 This production is new for us.  You will not be able to top these three ladies:  Elektra Christine Goerke (at last), Klytemnestra Stephanie Blythe, Chrysothemis Adrianne Pieczonka. 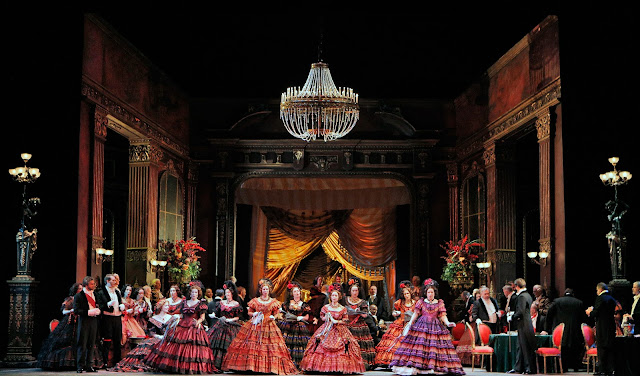 On the other hand I've never heard of these people:  Violetta Valéry Aurelia Florian * Alfredo Germont Atalla Ayan * Giorgio Germont Artur Ruciński * This is our traditional production for this always popular opera. 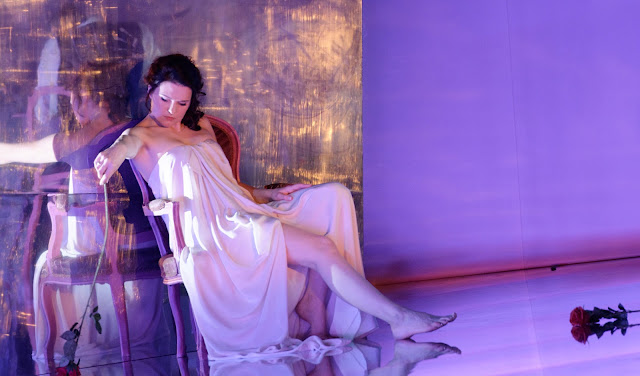 This production is also new for us, but the stars are familiar faces:  Manon Ellie Dehn, Chevalier des Grieux Michael Fabiano, are our current cast. 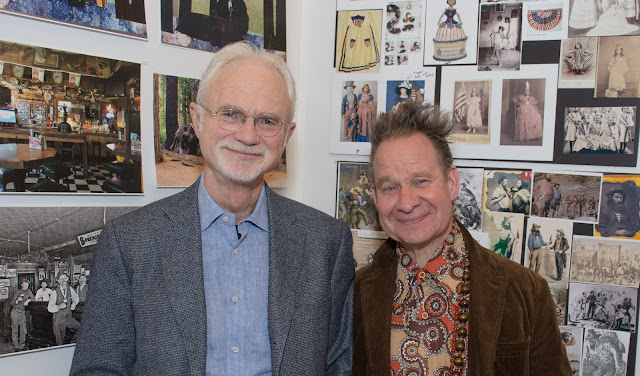 These two charming gentlemen, John Adams and Peter Sellars, are all we can show you of Girls of the Golden West. Adams reminded us that he needs to finish composing it.  On the up side is the incredible J'Nai Bridges.  Compose a lot of nice stuff for her.

The summer season for which I have already purchased my tickets will be filled with The Ring. Donald Runnicles, one of the world’s foremost Wagnerian conductors, returns to lead an exceptional international cast of the world's leading Wagnerians, including the Company debuts of Evelyn Herlitzius as Brünnhilde, Daniel Brenna as Siegfried and Falk Struckmann as Alberich. Directed by Francesca Zambello, the production also stars Greer Grimsley as Wotan/The Wanderer, Karita Mattila as Sieglinde, Brandon Jovanovich as Froh and Siegmund, and Jamie Barton as Fricka and Waltraute.  Some of my favorite people.

P.S.
I am pleased to see the absence of American musicals in this list.  Maybe this will be a short-lived fad. 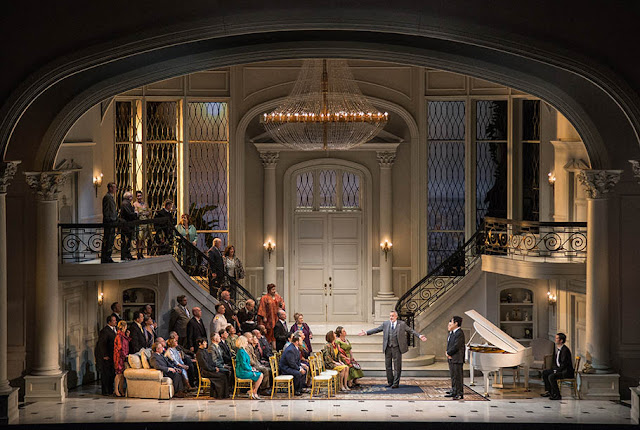 Jimmy López's opera Bel Canto premiered at Lyric Opera of Chicago in Dec 2015 and was filmed for the Great Performances television series the following month.  My tv is on the fritz, so I am viewing it from an online source.  It is based on Ann Patchett's novel which is in turn a fictionalized version of an historical event which took place in Lima, Peru, in 1996-97.  See here where I suggested this novel would make a good opera.

One of the fun things about this opera is that people sing in a lot of different languages — English, Spanish, Japanese, Latin, Russian, French, German and the native Peruvian tongue of Quechua.  The voice lessons are in Italian.  The characters drift toward people who speak their language.  We are at a birthday party for a rich Japanese businessman who loves the opera singer Roxane Coss.

My first reaction is that the role is too heavy for Danielle de Niese, a wonderful lyric soprano.  We need some more spinto.  The terrorists think the Japanese businessman is the president.  Good to remember here that the president of Peru at the time of the attack was Alfredo Fujimori, a Peruvian of Japanese descent.  They say "Tupac Amaru" for no apparent reason.  This is the name of the last Inca ruler.

My second reaction is that the piece is over orchestrated.  Opera is about the singing.  Think about how your opera would sound with only the singing.  I feel it's over orchestrated even in comparison with something like Tristan.  For such a loud orchestra we need Sondra Radvanovsky, not Danielle de Niese.  How happy I felt when I heard a bit of "Laschia chio pianga."  The composer seems only interested in the orchestra.  Since I am not in the hall, I could just be describing the recording.

Past the middle is a lyrical section which I like very much.  J'Nai Bridges has a beautiful solo.  So does Anthony Roth Constanzo.  It's consistently too loud in the orchestra compared to the singers, but the lyrical parts are attractive.  Less heavy on the brass and percussion.

In the real world of opera singing Roxane would speak more languages than anyone else.

There is a lot to like about this opera.  I'm adding a small post script.  When one is sitting in the opera house, one cannot lookup in Wikipedia that the president of Peru was of Japanese descent or other details of this type. 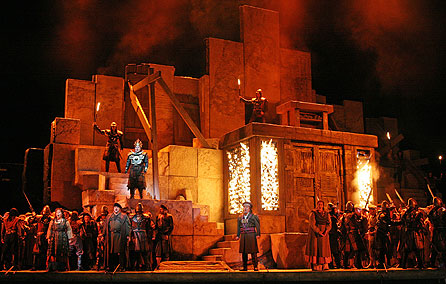 Today's opera in HD from the Metropolitan Opera was Verdi's Nabucco.  The presence of Plácido Domingo in the cast meant that the theater was much fuller than usual.  I want to say before I get lost in plot explanations that James Levine was in form.  His conducting shaped this wonderful performance.

I often enjoy regie performances, especially when they are looking for a modern interpretation of historical plots.  This may possibly be my first traditional production for Nabucco.  In particular the first scene, shown above, was far more dramatically clear than a modern production could ever manage.  We know we are in a place of worship, here the temple in Jerusalem, because all the men are wearing their prayer shawls, white scarfs with black stripes.  I liked this detail very much.  The scene ends with the Babylonians setting fire to the sacred scrolls.  The priest manages to save a set to take with them to Babylon.  This may or may not be historically accurate, but it corresponds to what is believed.

The story both does and doesn't correspond to Biblical narrative.  I'm not sure there is any basis for the daughters Abigaille and Fenena.  The insanity of Nabucco is from the Bible.  Domingo does an excellent job of portraying insanity and climbs convincingly up and down the stairs, though once he did crawl up.  He sang the madness aria lying face down on the floor.

There is a romance, of course.  We find at the beginning that both daughters are in love with the Jewish envoy Ismaele whom they met when he came to Babylon.  Fenena rescued him, and now he is returning the favor.  I enjoyed Russell Thomas in this role, though most of his singing is in the first scene.  Jamie Barton was good throughout but was especially gorgeous in her last act aria.

Abigaille, sung brilliantly and very dramatically by Liudmyla Monastyrska, is what makes this opera stand out from the crowd.  For some reason she has managed to convince the public that she is the daughter of Nabucco while in reality she is the child of slaves.  When Nabucco goes mad, she becomes ruler.  When Nabucco recovers from his insanity, he converts to Judaism and overthrows Abigaille.  All of this plot is enhanced by costumes which match our imagination of the Biblical story.

Another outstanding feature of the opera Nabucco is the spectacular choral work.  There is chorus throughout the opera, but the peak is, of course, "Va pensiero."  What a glorious performance, which was given an encore.  In Italy the encore is traditional.  The audience sings along.  We tried, but were hindered by not knowing the words.

I hope everyone enjoyed this as much as I did.

I like this conductor. This is a very fine cast and a pleasure to hear.  Mosuc is very romantic.  This is one of the operas I know almost by heart, and it is a joy to hear such a moving performance.  Nucci's Rigoletto is one of the great things.
Posted by Dr.B at 6:06 PM 2 comments:

👍🏻
I watched the live stream of Handel's Giulio Cesare from Salzburg in Cecilia Bartoli's inaugural season as artistic director of the Whitsun Festival in 2012.  The production was enormously distracting, so much so that I wrote mostly about it.  There were crocodiles, a Rolls Royce, deals over oil wells, a fan dance, etc.  And occasional obscene gestures.

What I noticed less of was the incredibly gorgeous singing, especially by Cecilia Bartoli, Andreas Scholl, Anne Sofie von Otter, and Philippe Jaroussky, with Giovanni Antonini conducting.  Jaroussky is at his most beautiful, and his duet with Anne Sofie von Otter is emotional.

In the past year the stream has become a DVD, and in the last month this DVD has received a Grammy nomination for best opera recording.  Does that happen?  I notice that of this year's 5 nominees, Król Roger and Giulio Cesare are DVDs.

This is the standard for modern Baroque performance. 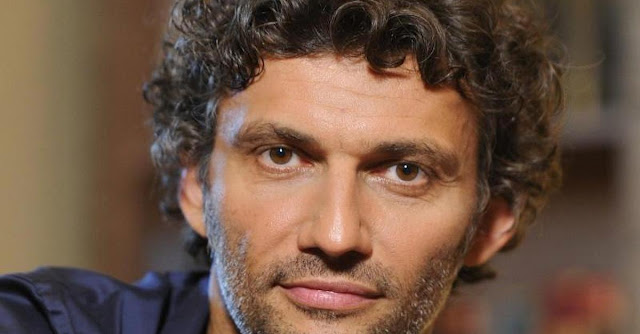 I know I've said it before, but now everyone is saying it.  The return of Jonas Kaufmann to live performances is supposed to be Lohengrin in Paris.  Here's the whole story in English.

Alex Ross is saying in the New Yorker that I called it on the pianist Trifonov.  If this sentence makes no sense, remember I like to do a lot of irrelevant bragging.

Though some were calling it "camp", I think I just thought the Christmas concert this year from Vienna was simply bad.  It's on youtube if you want to watch it.  The Knabenchor was good.  The only other thing of interest was how great Noah Stewart sounded.  I want to give him a plug.

We must now refer to Bryn Terfel as Sir Bryn.  The Queen has knighted him.