Jonas Kaufmann: "I was sexually harassed" 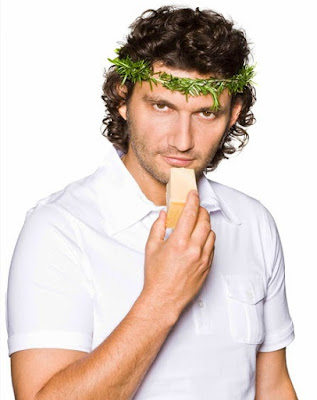 From Der Tagesspiegel we have:

Im Gegenzug hätte ich aber mit ihm in die Sauna gehen müssen. Das war ein sehr expliziter Tausch. Ich hatte Angst und habe Nein gesagt.“ Sexuelle Erpressung sei „grauenhaft“, so Kaufmann. „Man muss den Mut haben, sie aufzudecken.“ Der Klassikstar beklagte aber auch, dass in den USA ein Mann nicht mehr allein mit einer Frau in einem Raum sein könne, ohne dass eine Kamera laufe. „Die Gefahr, der Belästigung beschuldigt zu werden, ist zu groß.“ dpa
"In return, I would have had to go to the sauna with him. That was a very explicit exchange. I was scared and said no."  Sexual blackmail was "horrible," according to Kaufmann. "You have to have the courage to uncover them."  But the classic star also complained that in the US, a man can no longer be alone with a woman in a room without a camera running. "The danger of being accused of harassment is too great."

The machine translated this just fine.  I adjusted the punctuation.

May before it's over

This is Schumann, of course.  "In the wonderfully beautiful month of May."
Posted by Dr.B at 5:36 PM No comments: 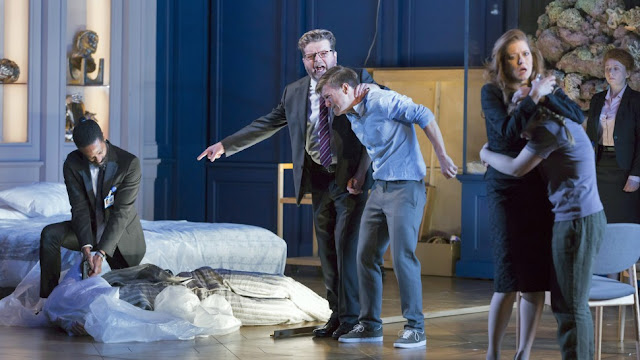 This is a free live stream from the Royal Opera House in London of George Benjamin's Lessons in Love and Violence.  It's an historical plot about King Edward II (25 April 1284 – 21 September 1327) who was deposed in a manner similar to what is shown here.

I do not save either cookies or data.  It is possible that Blogger and/or Amazon do.  If you find that this is true, tell them and me.    I do not program their software or have access to what they do with it.  If they are trying to sucker you into thinking it's me, don't fall for it.  It is also important to know that I have never been asked to remove something because it violated copyright.  However, it does seem that when I use a protected photo, Blogger simply removes it without informing me.
Posted by Dr.B at 9:44 PM No comments:

Email ThisBlogThis!Share to TwitterShare to FacebookShare to Pinterest
Labels: +400

We have a new candidate. 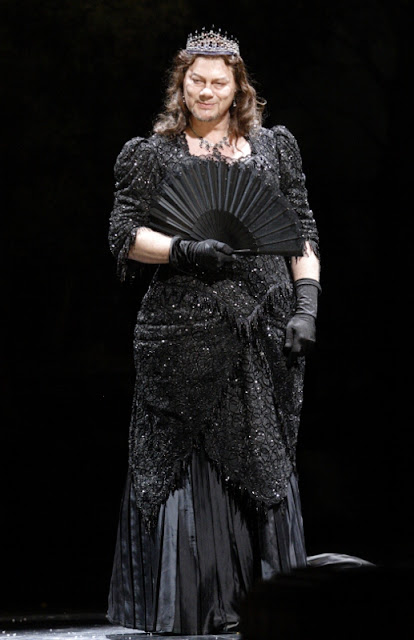 René Pape, of course, as Méphistophélès in the Royal Opera House's Faust.  Would you give up your soul for this?

Singers for the Ring

Shortly The Ring of Richard Wagner will begin at the San Francisco Opera.  These are some of the main singers.

Wotan and The Wanderer: Greer Grimsley.  On a good day he can be fabulous.

Alberich: Falk Struckmann*  He was our Iago with Botha and Fleming.


Fricka, Waltraute, and Second Norn:  Jamie Barton.  She was our Adalgisa in Norma with Sondra Radvanovsky.  She will have some quick changes.


Sieglinde: Karita Mattila.  She appears frequently at both the Met and in San Francisco.  I've loved her since her fabulous Fidelio.


Siegfried: Daniel Brenna*.  He played Alwa in the Met Lulu.  He comes in toward the end.


Siegmund and Froh:  Brandon Jovanovich.  He was here recently in Meistersinger, but this example is the best I've ever heard him sing.  Perhaps he should change Fach.

The list goes on and on.  Maybe more later.

I have always thought that one of the great secrets of the astounding success of Cecilia Bartoli was her ability to construct a program.  Who knew Vivaldi was this interesting?  So she proves it year after year in Salzburg. 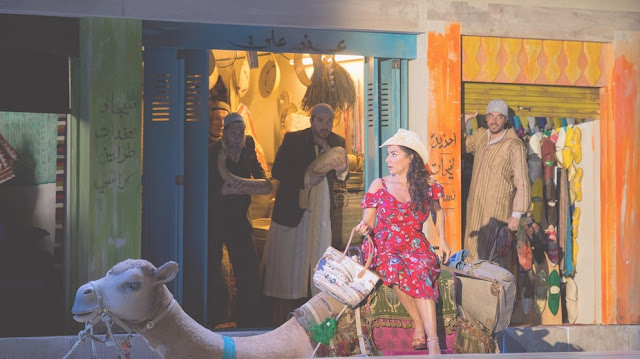 Here is a photo from L’italiana in Algeri this season. Rossini was fascinated by the culture clash between Italian women and moslem culture. Here is this year's program for the whole festival which is going on now.

Here is next year's program which is all about castrati and features five of the top countertenors:  Philippe Jaroussky, Max Emanuel Cencic, Yuriy Mynenko, Christophe Dumaux and Franco Fagioli.  The operas are Handel's Alcina and Porpora's Polifemo, as well as an oratorio by Caldara composed for Farinelli called La Morte d'Abel.  Every singer in the genre will be there.

You were wondering if she still had it. 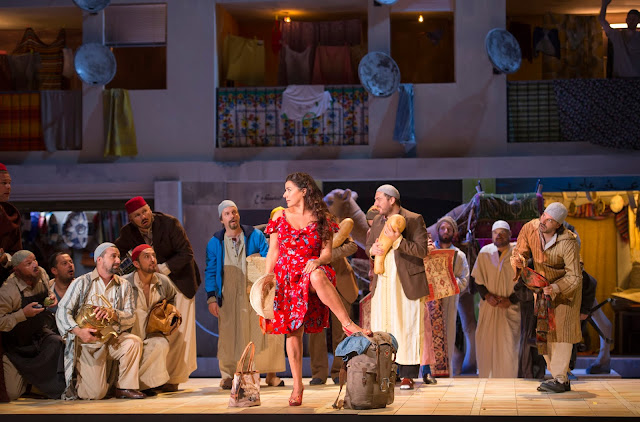 I thought to myself while leafing through lists in YouTube of Vaughan Williams' Serenade to Music that Bernstein would completely understand this piece.  He understood perfectly the necessity of ecstasy.  The words are Shakespeare, of course.  "How sweet the moonlight sleeps upon this bank...."  I think I got it in one.

This new one is also very nice.

American Bach Soloists performed all four of Bach's orchestral suites on Monday in Davis in the order IV, II, I, III.  This seems to be their groove.

II was scored as a transverse flute solo which was played by Sandra Miller.  It was rather like a concerto in the form of a suite.  It was gorgeous.

This completed their season.  See you next year. 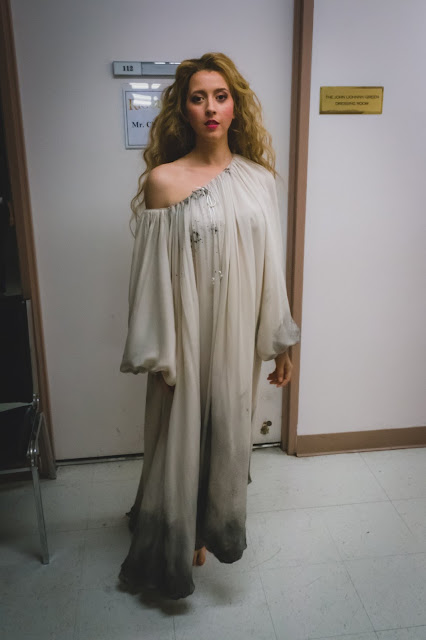 Lisette in costume for Gilda at the LA Opera.
Posted by Dr.B at 3:51 PM No comments:

The fan site Cecilia Bartoli Forum is going down on May 24 because on May 25 the new EU laws concerning the internet go into effect.  He is concerned that as a blogger with no commercial content he is nevertheless exposed to potential fines.

I'm not in the EU, so I am ignoring this.  I am minimally involved in commerce because I display links to Amazon.com.  If they want me, they will have to come and get me.  I don't collect information about anyone except opera singers and maybe conductors, directors, etc.  I collect this information in my head.

The cookies law was far simpler.  Blogger could simply take care of it.  When I pull up my blog here in the United States, there is no cookie warning, but if I pull it up in Europe, there it is.  We were wishing there was a similarly simple solution to this new situation, but no one has any idea what they need to do.  So:  Dear EU, if I am violating your law, you will please inform me first of what I am doing wrong and second what I might do about it.  Until this happens, I'm going on with what I'm doing.  I have noticed since this was posted that pictures I post for display sometimes disappear from the site used by Blogger.  Someone may have requested this.

Schedule information about Cecilia Bartoli may be found on her official site.  She posts occasionally on Twitter.

1. I pay someone to advertise my product or site.

2. They identify what type of product I am wanting to advertise.

3.  They identify which internet users might be interested in my product.  They do this by gathering data on what they do when on the internet.

The only alternative to this advertising model is to distribute advertisements for product randomly to all internet users.  Only a very small percentage of internet users have any interest in opera.  I am not even able to imagine how you would get this to work so that you actually gained viewers or sales.

This time the list of people involved in last night's semi-staged performance of Puccini's Tosca at Sacramento Philharmonic and Opera exactly matches the picture above the list.  Our conductor was here last season to present a program of Italian music.  Mark Streshinsky directs operas for West Edge.  Our Tosca and Mario are new for me, but Philip Skinner (sometimes Philip, sometimes Phil) is a regular at West Edge in the San Francisco Bay Area where he has a following.  I have seen him before in seven different operas, including the by now famous Lulu.

The conducting was good.  View screens of the conductor were placed at the sides of the stage, as at Covent Garden, but I didn't notice anyone looking at them.  As a semi-staged performance, the orchestra was at the back of the stage with a staging area at the front.  Each act had an arrangement of furniture to make the set.   The singers' proximity to the front of the stage made me more aware of the fine points of the plot than ever before.  I don't remember noticing before that the current government was celebrating the defeat of Napolean, when at the end it is announced that Napolean has won and is moving toward Rome.

Phil went loud and domineering with his Scarpia.  He is extremely good at this and received loud booing at the end.  How much can one write about Tosca?  I have reviewed it 9 times before.  The singing was lovely, especially Alexandra.  They followed the current fad of "Vissi d'arte" starting with Tosca lying on something.  It was nevertheless beautiful.

Extremely interesting to me was Scott Levin (normally billed as E. Scott Levin?) who played the Sacristan who appears only at the beginning of the opera.  His voice is extremely full and beautiful.

If we aren't to get a fully staged opera, this semi-staged one was good.

Sacramento State Opera Theater presented two short operas with a common theme:  one or more characters are in disguise.  The great disguise opera is La Cenerentola where the Prince and his valet exchange places. Both roles are well developed.

There is a small orchestra positioned behind the singers.  I have been in this theater when it had a pit, and the remnants of the pit are still visible.  So why don't they use it?  The supertitles were virtually invisible, and other signs of disrepair were all around.

Sylvia is expecting a visit from her betrothed, a man named Dotante.  They are betrothed but have never met, apparently.  Sylvia and Lisette change places, which consists primarily of putting the maid's outfit onto Sylvia.  When a young man arrives, he claims to be Dotante's servant.  The two pretend servants get along very well and decide once the disguises are revealed that marriage would be a good idea after all.

This is a relatively modern piece and is therefore through-composed.  The music was sweet and charming.  I liked both of the young women in this work, and would have liked to hear more of Tatiana.  Angela is beautiful and appeared also in the next opera.

Don Annibale, an old man, has just married Serafina who is much too young for him.  Their family members are celebrating the nuptials.  A cute bit of business occurs when Don Annibale and his new mother-in-law dance together and she leads.  Enrico arrives and has a long duet with Serafina for the most operatic section of the piece.  She is not encouraging, and Enrico leaves after toasting the groom.  This scene would have been improved with visible supertitles.

Don Annibale dresses for bed with his new bride, but before anything can happen, Enrico arrives in three disguises, each needing a prescription.  From here it is a major slapstick tour de force for Enrico.  He looks and acts like an idiot in all three of his disguises.  The audience screamed.  The most amazing thing about this opera and probably the explanation for why you have never seen it lies in the lines for disguise number 3:  they have a long list of ingredients for the prescription which they recite like a patter song.  How is this even possible?  Jordan Crack carried this entire opera.

It was Donizetti and therefore featured extended sections of secco recitative played on an electric piano.  It was too loud.  I always say sing with the music, not the conductor.  Here there was no choice.  The conductor faced the musicians at the back, even when playing the electric piano.  The singers either faced each other or the audience.  No one got lost or confused.

This is fun, and you will never see either of these operas again.