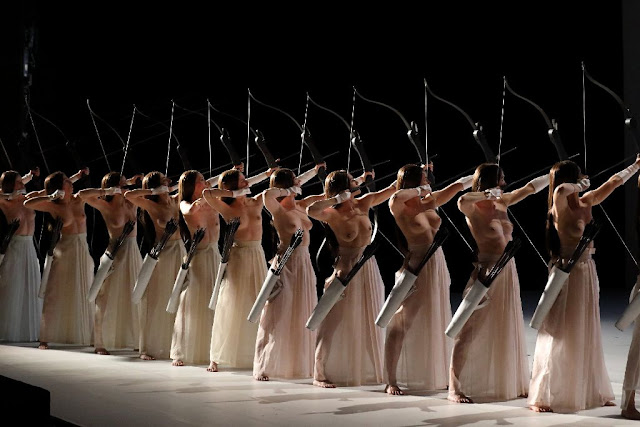 There appears to be some nudity in this production of Wagner's Tannhäuser from the Bayerische Staatsoper.  Or maybe we are seeing body stockings.  Or some of each.  I'm imagining the casting call for the set of archers shown who are clearly topless.  Their boobs are too uniform to be ballet.  [Research indicates that the archers are members of the ballet.  I'm still not sure I believe it.]  Later in the opera are people lying on the floor who are wearing body stockings.

The archers are very carefully blocked so that when they are actually shooting, they are always facing up stage.  The cocked arrows are never pointed anywhere else. It is interesting to notice that none of the arrows fell to the floor.  Later in the opera one of the characters pulled back an arrow and pointed it in the general direction of Elisabeth.  I did not like this at all.

I did not hallucinate that the Dresden Amen appears in Act III.  I'll have to learn to sublimate my reaction to this showing up in Wagner. 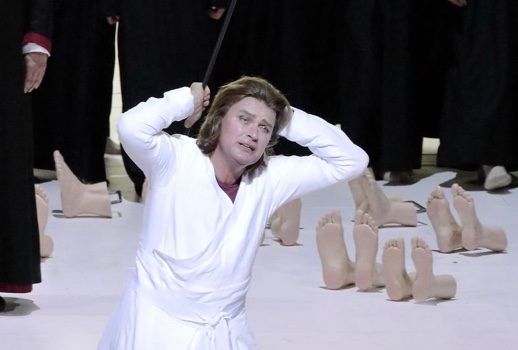 The most reaction in my group was to these feet.  Feet!  I won't bother to try to explain this production and have probably already shown the most interesting parts.

The orchestra, chorus, conductor and soloists were glorious.  I especially liked Anja Harteros, but then I generally do.  It was entirely beyond ones very high expectations. 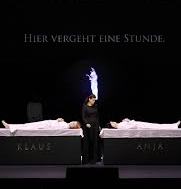 Anja looks down on her dead self.  Please note:  the tombstones are named after the singers and not the characters they portray.  The talking heads said that this was to show that an opera staging is just pretend.  No attempt is made to explain her death, except we are told that an hour has elapsed.

The production is a cross between Star Wars and The Hunger Games, and instead of Venusberg we have Venusfleischberg [mountain of flesh].

Again the greatest applause is for Petrenko whose contract has been extended to 2021. 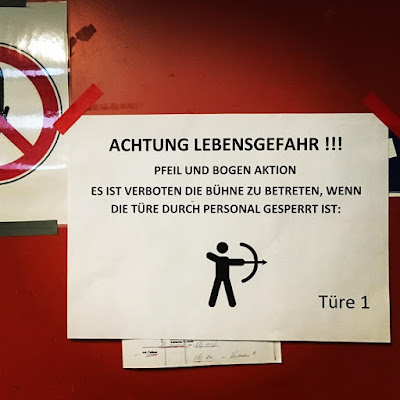 Sign back stage during this performance.  Attention Life Danger!!!  Bow and arrow action.  It is forbidden to enter the stage when the doors are locked by staff.
Posted by Dr.B at 11:42 PM

I was there yesterday, and the archers were indeed topless, though it appears they used the same set of women (clad in body stockings) to do all the Pilates in Act 2, which is how they appeared at the curtain call.

And you are right, the blocking made use of a combination of no arrows and no cocking to avoid accidents, though from where I was sitting, the Act 2 arrow (Gerhaher holding the bow?) was pointed at KFV, and not AH. I found it quite frightening, though not as much as early in Act 1 when the (admittedly gently) cocked bows and arrows were momentarily pointed at my area of the auditorium.

Also, I'm such a big fan of the blog!