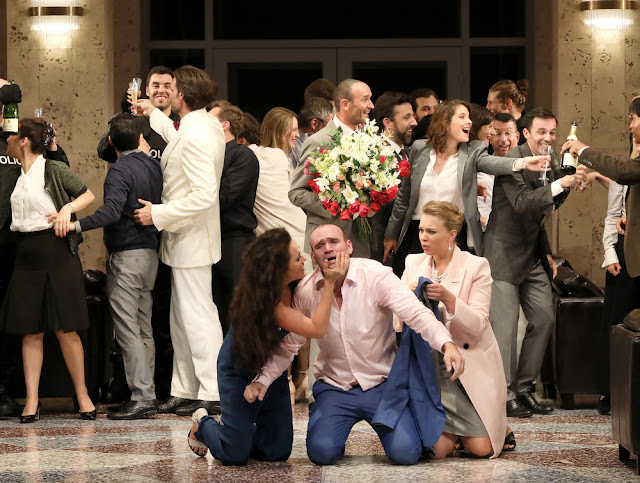 Over undisclosed pathways I found my way to Bizet's Carmen from Aix-en-Provence.  I will try to explain it, but it may take a while.  My source shows only French subtitles.  Above is the end tableau.  Carmen was originally an opera comique with spoken French dialogue, and this is what we have here.  This allows our producers to change the dialogue to whatever pleases them, including adding characters not in the original libretto.  Last summer our Carmen included Lillas Pastia, the owner of Carmen's nighttime hangout, in a speaking role.

We appear to be in the lobby of a business in a room filled with large brown leather chairs.  An official appears periodically throughout the performance who does not sing and seems to be the head therapist in a radical experimental therapy group.  At first Fabiano (in a light blue suit and sun glasses) and Dreisig (in a pink coat) are an engaged couple who are here to seek help before marrying.  Legal disclaimers are signed.  Watch, wallet and phone are given to staff.  Fabiano puts on a name tag "José" and Dreisig leaves.  Clearly this is what I would call a concept staging.  I thought it worked.  If the characters are modern people, then it is easier to understand what is going on emotionally.

This is closer to the basis for Carmen than the stagings usually are.  Carmen needs a policeman to assist with certain aspects of her smuggling operation, and Don José is chosen.  So it's all a con.  Our staging is more theater than con, but the effect on José is similar.

Men enter bearing name tags that say "Soldat" and sit in the brown chairs.  The lady in the pink coat returns but everyone ignores her.  The soldiers first sing in their normal voices and then later they open their mouths and children's voices come out.  Hmmm.  They hold up smiley faces and José laughs.

Then suddenly the men bring out wine and girls enter smoking cigarettes.  Everyone drinks.  The atmosphere is very casual and relaxed, and I enjoyed this.

The entrance of Carmen is something to experience.  She bursts on the scene wearing pants and warning everyone not to fall in love with her.  She flirts with everyone but gives the flower to Don José.  I loved her madly and understood why José would fall for her.  She looks and sounds gorgeous and sings with great intensity and joy.  After choosing him, she leaves.

The woman with the pink coat returns, calls herself fiance, and puts on her "Micaëla" name tag.  This is the duet where she brings a kiss from mama.  Carmen returns and there is an extended scene where José tries to tie her up with his necktie.  The Seguidilla is sung from a chair.  The lights come back up, everyone leaves except José, and we have the end of Act I.

In Act II the plot thickens.  We are attempting to understand what about all this is its therapeutic purpose.  Projection?  Perhaps girlfriend is dissatisfied with his level of passion.

The girls with Carmen return.  The toreador comes out smoking a cigar and sings his big aria.  Carmen really likes him and goes off with him.  The men point guns at José long enough to upset him, and then smiley faces come out the barrels, making him laugh.

Carmen returns with castanets, argues with José and tells him to go back to his barracks.  Escamillo is her real interest while José is only pretend.  He responds by singing The Flower Song.  Beautifully.  This staging emphasizes the importance of Don José.  Michael Fabiano basically carries the opera.  Carmen responds by praising only liberty.  They fight and everyone else on the stage applauds.  For them this indicates success.  Shall we continue or not?  End of Act II.

In Act III José is still on the stage while the music plays.  Then the lights come up and the psychiatrist comes out along with the others.  The decision has been made to continue.  Carmen, Frasquita and Mercédès play the card game.  The two girls discuss their fortunes, but Carmen draws the death card.  José stares at them.  We're trying to decide if the therapy has gone wrong.  He has clearly lost his sense of what is real and what is not.  Something resembling a staff orgy ensues.  This would be a hell of a job.  José watches from above.

In Act IV something odd happens.  José is still there looking on, but a new client has arrived.  The music of Act IV plays while the scene is staged to resemble Act I.  The new guy's name tag even says José.  Except all the fizz has gone out of Carmen.  Our José stabs Carmen multiple times, but this is all fake since the knives are not real.  The opera ends with the staff on stage getting out the wine, the new José receives flowers which ours never did.  Carmen isn't dead and tries to comfort our José along with the returned woman in the pink coat.  This is sort of a WTF ending.

We are certain of only a few things:  that we love Stéphanie d'Oustrac and think Michael Fabiano is absolutely fabulous, especially for being able to establish so many different moods. The music was not destroyed by this regie production.  I like trying to figure out what is going on, but the ending didn't clarify anything.  It seems the therapy has backfired.