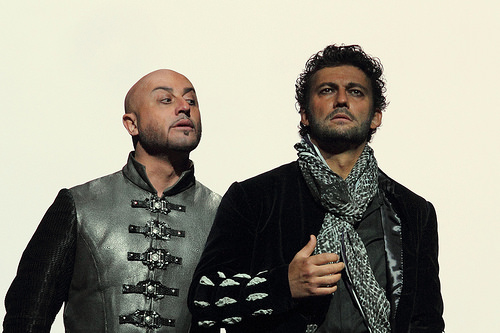 We had a larger than usual crowd at our local theater to see Verdi's Otello from London's Royal Opera House.  The fame of Jonas Kaufmann has spread even to Sacramento.

Verdi's Otello is very close to Shakespeare's Othello.  Verdi omits the opening scene in Venice and adds a charming love scene in Cyprus.  For me the plot is very much enhanced by showing Otello and Desdemona together before the influence of Iago.  British direction has resulted in a traditional production which does not interfere with the clarity of the plot.  Our focus is on the singing actors.  Though Otello's appearance is described in the libretto, there was no dark makeup except as observed above.

This was Jonas Kaufmann's debut in this role.  A cast has been assembled to suit our hero's not terribly heavy voice.  Elsewhere I criticized Vratogna as too light for Iago, but here he seems ideal.  His creepy, insinuating style is the perfect foil and partner for Kaufmann's dramatic vocal variety.  I also liked Maria Agresta for her tenderness.  In our theater the Ave Maria was too soft.  It most resembled a theatrical Otello rather than an operatic one.

Our Jonas is an extraordinarily beautiful man with a gorgeous, dark voice.  I have loved his work as a spinto tenor and do not think of him as a baritone.  In addition to these qualities, he is a great actor of wide ranging emotion.  I have loved him most in Werther, Lohengrin, Carmen, Die Walküre, Parsifal, Don Carlo, Il Trovatore, Forza and The Girl of the Golden West.  In all of these he brings added depth to his characters.  I often listen to him speak in both English and German and find him to be wonderfully intelligent, a fact which also contributes to his characterizations.  I mention only two languages because they are the ones I speak, but he speaks others.  He is adored as few in his profession are.

In Otello he is a villain whose villainy is exceeded only by that of Iago.  I'm sorry if you missed it. Perhaps there will be a DVD.