Selfie of the Week no Month no Year 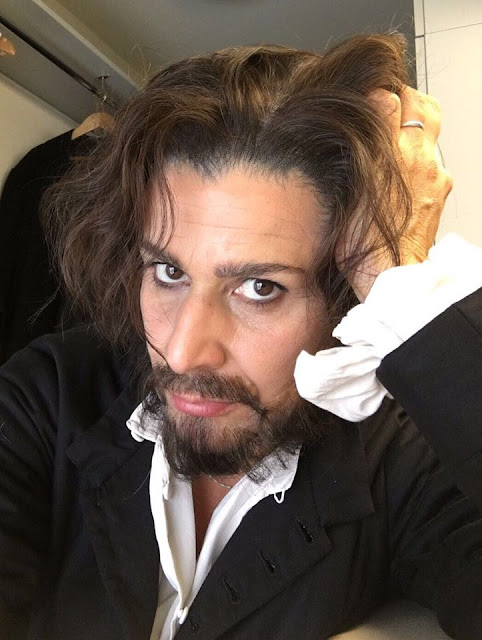 This one is very sexy, so I moved it up. 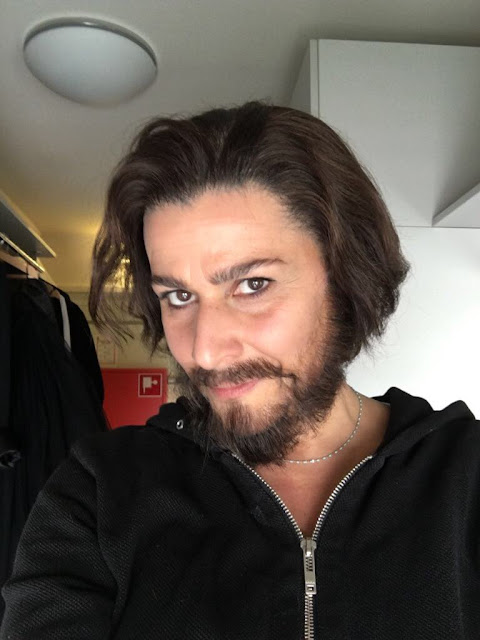 It is pleasing how much she is enjoying this. I am made merry hearing her in an interview saying that she would like to sing Don Giovanni. If that happens, I promise to fly.

In an interview her husband called her "Herr Bartoli."

My favorite news of the week is that Der Rosenkavalier live from the Met in HD made the top 10 on the international movie charts. 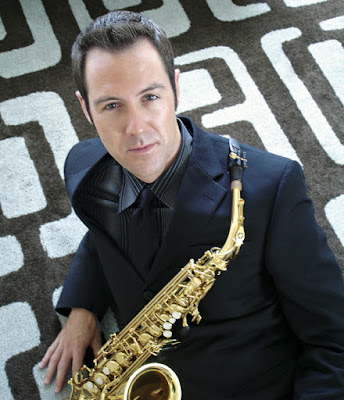 This American composer has written for children's shows.  This piece is in three movements and is very tonal.

This Japanese composer has brought us a piece in one movement for recorded synthesizer and live saxophone.  The synthesized part sounds very dark and forbidding.  It didn't say "bird" to me, but I still enjoyed it.

This Argentine composer was the only one that I had heard of.  To summarize this is the four seasons of Buenos Aires in the form of a tango for saxophone and piano.  Fun and exciting.  It will not make you think of Vivaldi.

This is also a Japanese composer who has written an improvisation for solo saxophone.  They put up the lid on the piano for this.  Keith explained this at some length.  It involves various kinds of technical tricks such as different types of tonguing. At the end Keith turns and plays into the piano, and we notice that John is holding down the sustain pedal.  I know improvisation was popular for a while, but I don't know if it still is.

We are informed that rumba is one of the mainstays of saxophone literature.  The piano is back for this piece of South American rhythm by an American composer.

The variety of styles on display was attention grabbing.  My favorite was probably the tango four seasons.  The recital isn't dead.
Posted by Dr.B at 10:47 PM No comments: 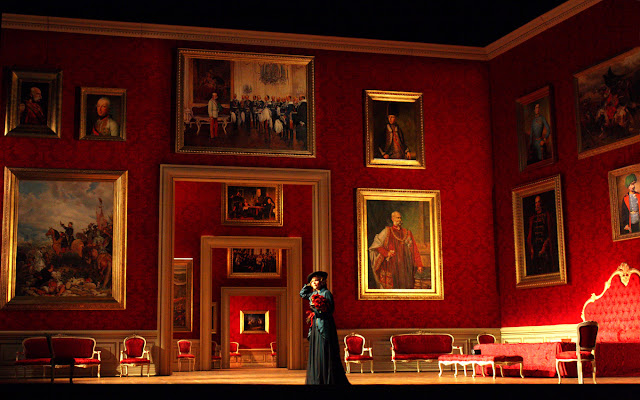 👍🏻
This is the moment in Richard Strauss's Der Rosenkavalier, live in HD from the Metropolitan Opera, at the end of Act I when Renée Fleming looks out into the auditorium and thinks this is perhaps the last time.  The look of this scene resembles Blenheim Palace, the home of the Duke of Marlborough. 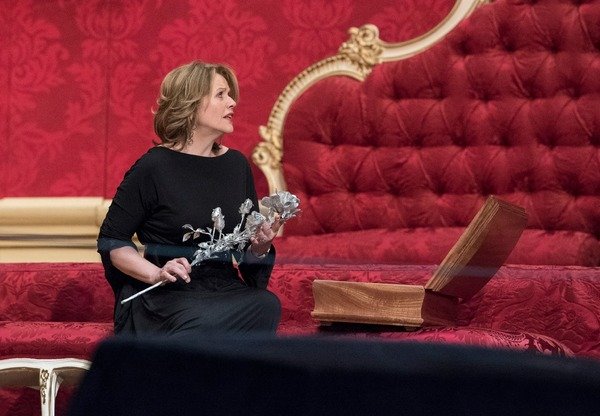 The time has been moved to 1912 when the opera was first performed, just before WWI.  All the men are soldiers.  There were many special moments in this Rosenkavalier, but I especially liked when the Marschallin sings "Wenn ich auch an ein Maedel errinnern, die frisch aus dem Kloster bis in die heiligen..." and she goes over to the chest containing the rose, takes it out and remembers that once the rose arrived for her.  I have never seen this business before.  I saw my first Renée Fleming Marschallin in 2000 in San Francisco and find her characterization was deeper and more serious than before.  I also loved that at the end she takes the arm of the police sergeant, moving on to her next lover it would seem.  I can only describe her as magnificent.

Most of the details of the staging are acceptable if not always traditional, but at the end is a surprise.  In Act I a large, odd looking green hat appears.  Then at the very end of the opera when everyone has left the stage, an army rises up with someone in the center wearing the green hat.  We must assume this is the otherwise not seen Feldmarschall being mowed down in battle.  Curious.  This could easily be done without.

I didn't agree with every detail, but the richness of texture of this production filled my heart to overflowing.  Der Rosenkavalier holds a special place in my heart, and this one has risen to the top. 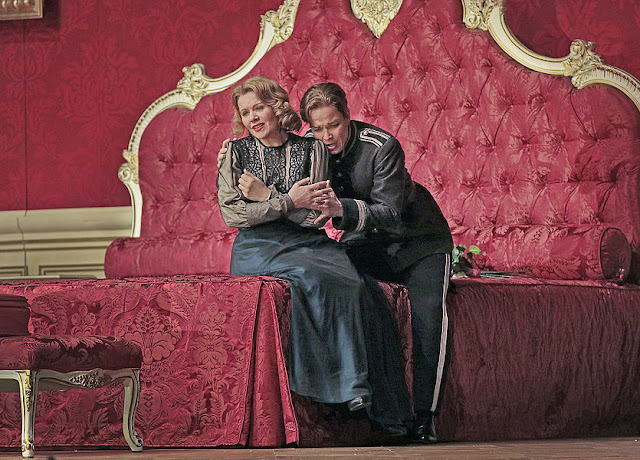 Our Ochs, Günther Groissböck, was Ochs in Salzburg in 2014.  He adds many layers of depth to this character. 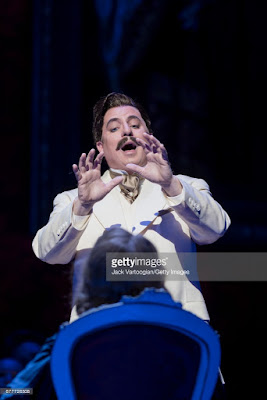 And our Italian singer was none other than Enrico Caruso. 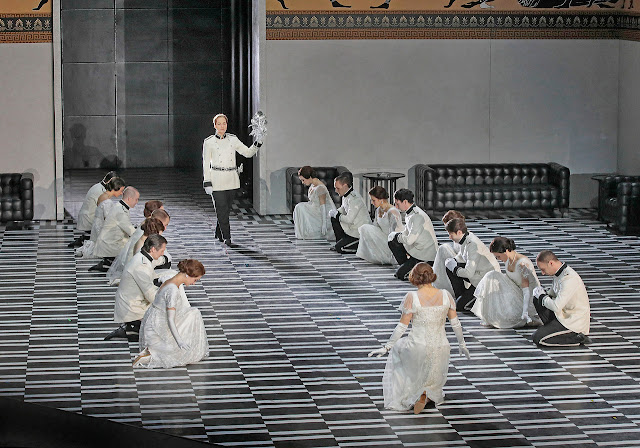 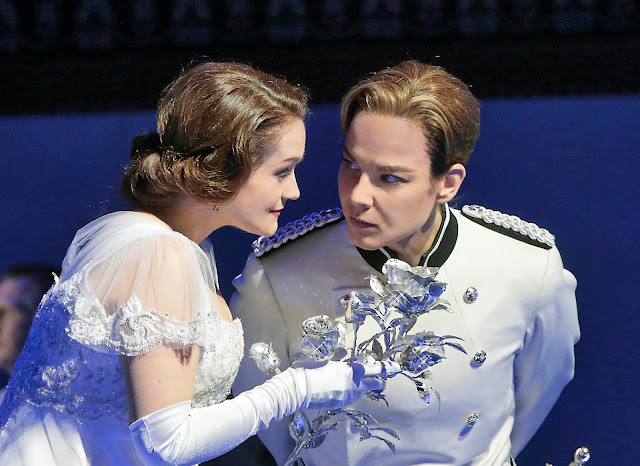 This moment in the second act was also perfection, though of the more traditional sort.  Octavian leans over to smell the Persian attar of roses, looks up at Sophie and instantly falls in love.  I first heard Erin Morley in King Roger in Santa Fe where she was wonderful.  Her Sophie is much more than a mere soubrette and adds soaring lines.  Her acting is also more complex than usual.

When I saw her in duets with Anna Netrebko, I did not imagine that our Latvian mezzo Elīna Garanča would turn out to be such a wonderful actress.  She was simply spectacular.  I'm having a hard time finding the words for something that exceeded my wildest imaginings.  She threw herself so gleefully into Mariandel.

We finished with a spectacularly glorious trio.  Thank you, Peter Gelb, Metropolitan Opera, Günther Groissböck, Erin Morley, Renée Fleming, and most of all Elīna Garanča for a wonderful memory.

The news for this summer at the San Francisco Opera is that drinks will be allowed in the auditorium during the performance.  Too many opera people see opera in movie theaters these days.
Posted by Dr.B at 9:14 PM No comments:

One cannot love her too much

The heart soars.  This is Marietta's Lied from Die tote Stadt. 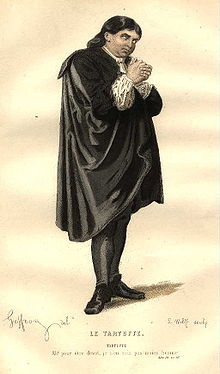 CSUS opera workshop presented Kirke Mechem's Tartuffe.  Wikipedia says this opera premiered on May 27, 1980, at the San Francisco Opera, though there is no mention of it in the archive and I was a season ticket holder at the time.  My memory consultant says this would have been Spring Opera, a second tier company that existed at the time.  It is a number opera with arias and ensembles, and makes an excellent opera for an opera workshop because many of the roles have musical substance.  Our performance was accompanied by a full orchestra from VITA Academy conducted by Brian O'Donnell.  The theater department provided the production, as was always the case in my day.

The picture above looks a lot like our Tartuffe except ours had much thinner legs.  This was fully staged and not semi-staged as advertised.  Dorine is a distinctively Despina-like character who gives advice and noses in on pretty much everything.

The opera is after the play by Molière which is subtitled "The hypocrite."  He pretends virtue while conning people out of their wives and goods.  It was censored by Louis XIV to please his archbishop.

Orgon is fascinated by the very virtuous Tartuffe whom he sees at mass.  Then he invites him to live in his house.  Everyone in Orgon's family hates Tartuffe.  Orgon announces that Mariane will marry Tartuffe which brings the action to a head.  It has a happy ending.

It would have benefited from some improved diction but was fun.  The composer was clearly interested in writing music for operatic singers, something that is not all that common in the post-Puccini world. 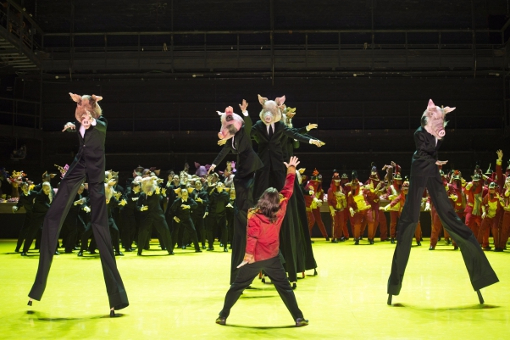 Mussorgsky's Sorochyntsi Fair from the Komische Oper Berlin is brought to us by the Opera Platform.  The librettto is by Mussorgsky on a story by Gogol.  It was unfinished when Mussorgsky died and was finished by Vissarion Shebalin?  I see.  There are several versions, and this is the one chosen by Komische Oper.

Gritsko and Parasya meet at the fair.  Papa decides that since he is the son of a friend, they should marry.  Mama thinks this is ridiculous. The parents go home and quarrel.  Mama sings.  Her lover arrives but has to hide when other people arrive.

You thought this was going to be a typical love story, but no.  The devil has lost his red jacket, and eventually the whole story turns to this.  Famously, A Night on Bare Mountain is embedded as a dream sequence, here staged as a pigs banquet.  Surrounding the dream are portions of the Songs and Dances of Death.  (I did them once.)

The daughter, missing since the opening scene, returns to sing.  Then dance.  Everything works out for the best.  The music is gorgeous, and the story is fun.  The quality of work in German theater is excellent.

Anna Netrebko, the one and only 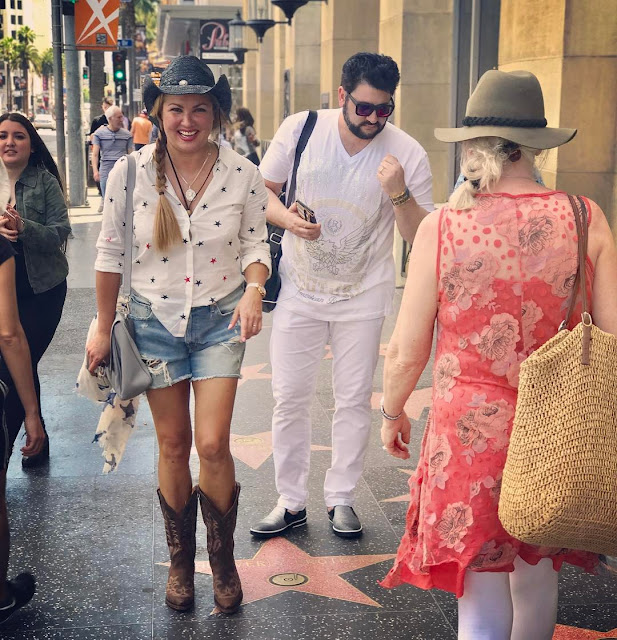