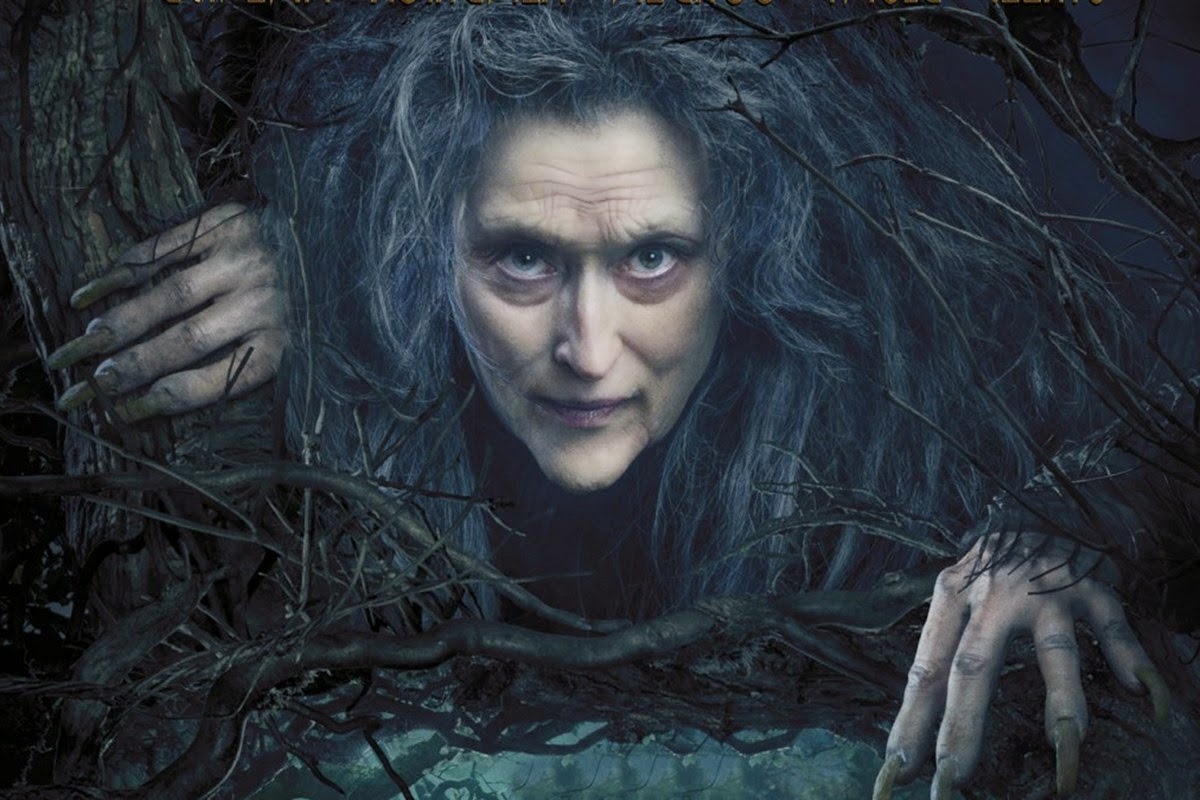 I was going around the circle at Curves the other day, and the attendant was complaining about the new movie Into the Woods.  For her it had two endings:  the expected fairytale ending and the second dark one.  She also was surprised that there were musical numbers.  I tried to explain that this was a film adaptation of a classic musical comedy by Stephen Sondheim.  Who?

There has been a wide range of reactions to this film.  I imagine the range would depend on whether you had ever seen it as a musical.  It was done live here in Sacramento a couple of years ago, so nothing really surprised me when I saw it today.  I thought as film adaptations go, this one was excellent.

How could you want a better witch than Meryl Streep?  Or a better wolf than Johnny Depp?  I was especially impressed with the diction.  Every one of Sondheim's words could be clearly understood.  I think the movie's flaws are the musical's flaws.  I think Sondheim couldn't bear to write a fairytale ending.

Anything can happen in the woods.

P.S.  I've never really been a fan of Sondheim, except as a lyricist.  His first big project was writing the lyrics to Leonard Bernstein's West Side Story (1957), possibly the best of all American musicals.  These are truly great songs. Sondheim, it seems, thinks they're too poetic.

He's been very busy since then.  He's done a lot of shows that I've never seen, and people seem to like to sing his songs.  But a string of songs by Sondheim generally makes me cringe.  I can only tolerate Judi Dench singing "Bring in the Clowns," for instance.

Early in the blog I wrote:  "While I was in London, I tried to see Sunday in the Park with George, mainly because I've never seen a Stephen Sondheim musical. Unless Sweeney Todd is Sondheim."  I went on to say,  "Sondheim is short choppy phrases of three to six syllables with tunes played on the black keys. All the tunes sound exactly the same. How does he do that? Perhaps it's a minimalist musical."

But then I kind of liked Sunday in the Park with George when I saw it on Broadway.  Still no hit tunes, but I kind of liked the content.  With Sondheim it's more words over music.  Ideas over execution.

And then this year came the marvelous Sweeney Todd at Lincoln Center with Bryn Terfel and Emma Thompson, a truly great event.  Their gigantic personalities raised it above itself.

I can only shrug.  He's too significant to simply ignore, but musically he never grabs me. I'm now going to retire Into the Woods and Sweeney Todd.  Enough.
#ad

From a compositional point of view, I find Into the Woods fascinating in the same way I find Berg's Lulu fascinating. The whole drama is right there in the music. Although Sondheim is more hummable, he did seem to transition from full-on melodies to a more motivic approach in his later works. I also (being someone who likes neatly wrapped up happy endings) am often quite happy to stop watching Into the Woods at the end of Act 1. One thing that has been touted about the film is the brand new full-orchestra orchestrations, and I actually like the chamber ensemble sound of the original orchestrations, though I guess they'd be less effective in the cinema. All that said, I am looking forward to seeing the film.

We saw "Into" at SF Playhouse last year ('14) then the movie on Christmas Day. We had seen it (brag-brag) in New York in the 1980s or '90s. Somehow the ending of the movie (identical text, identical music, if fuller orchestra) was more optmistic than SF Playhouse's take. the survivors are going to make a new community and get on with life. Sondheim is just, simply, cold; that's his thing in most-every show we've seen. Which is fine. To me what's particularly cool in his work is the way so many lyrics (couplets, rhyme) kind of veer off; the ear expects the payoff of the set up to be a sweet joke, but many are barbed instead. You're right about Meryl. And Depp. And we thought the two princes singing in the river was hilarious.

PS Intrigued by your comment on West Side Story. not Showboat? (I do tend to agree, though.)

Highlight: princes tear open their shirts.
Bernstein is my guy.

must discuss the complicated Leonard next time we're in the same room...another intriguing Barbara Baker remark