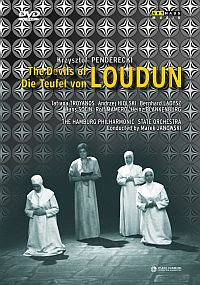 I was browsing in R5, a new record store in Sacramento that now occupies the old Tower Records building on Broadway, a store that is the brain child of Russ Solomon, the original founder of Tower Records. "He's 82 and a multimillionaire, but he likes to sell records," said the employee that sold me a DVD of The Devils of Loudun by Krzysztof Penderecki. "I can't afford this store," I replied. "This is the most opera DVDs I've never seen before I've ever seen." "That's good, right?"

The plot exists on two levels: the true plot involving the Huguenots and their perceived threat to the absolute authority of Louis XIII and his adviser Cardinal Richelieu, and the perceived plot about witchcraft. The opera, which focuses on the perceived plot with only hints of the true plot, is permeated with an atmosphere of sexual debauchery and hysteria.

A friend has pointed out that classical music generally is much more varied and interesting than the narrow, limited and monotonously tonal repertoire of opera. Penderecki offers a rare opportunity for some variety. Devils is written in his most experimental phase in a style involving extreme atonality, tone clusters and quarter tones. You may have seen a horror movie with a sound track that sounded like this.

The video is a studio production filmed immediately after the world premier in Hamburg in 1969. The opera is in German, and stars the 31 year old Tatiana Troyanos. She is magnificent. It isn't at all difficult to see what attracted her to this role. Mad scenes always go to the sopranos, and here is a wonderful mad role made for her mezzo soprano voice. She plays Jeanne, the Prioress of the debauched convent who has become obsessed with a male priest, Grandier, she knows by reputation only and imagines he is tormenting her. The character is mad from beginning to end, a fatal attraction for an opera singer.

The accusation of witchcraft comes from her. She and her fellow nuns are supposed to be possessed by devils, but the case is not completely made. A representative of the king appears and takes over from the locals. They see Grandier as a political threat and see to it that this threat is eliminated.

The music rolls over the atmosphere of hysteria like a tidal wave. The plot and music seem wonderfully well paired. It's somehow very spiritual. Religious ecstasy and madness are blended in a fascinating stew of sound.

The production is realistic and moving. The plot is very violent and involves, sex, torture and burning at the stake. If you are squeamish, you should know that this video does not pass the ickiness test. I have to admit I loved it.

Unknown said...
This comment has been removed by a blog administrator.
5:37 PM


It's enormous that you are getting thoughts from this paragraph as well as from our argument made at this time. outlook 365 sign in


I am reading this great informative post. Thanks for posting. Foreign visitors can apply for a Turkey Travel Visa online. You should apply for a Tourist visa to Turkey only if you intend to visit the country for tourism purposes.

Thank you The international travelers who travel to Kenya need visas Kenya. That they can apply online and can get the 24*7 customer assistant and pay online kenya visa costs.