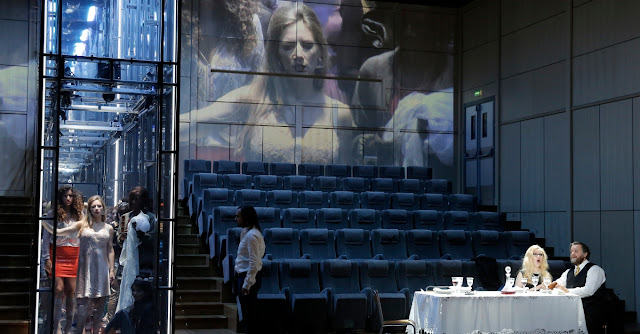 I have seen Handel's oratorio Il Trionfo del Tempo e del Disinganno staged before.  This time I watched it on medici.tv from Aix-en-Provence.  It is a youthful work written by 22 year old Handel while he was visiting in Rome.  At that time in Rome opera was forbidden and of course women singing in public was also forbidden.  All the high voices would have been sung by castrati.  The previous time I saw this it was mounted in Zurich as a vehicle for Cecilia Bartoli as Piacere, and even Anna Bonitatibus who replaced her was incredible.  It forms the core of Cecilia's album Opera Proibita.

Early on Disinganno says to Bellezza "La bellezza non ritorna piu."  I repeated this out loud several times. (Beauty never returns.)  For some people like Jennifer Lopez it never leaves, apparently.  Just remember that at 75 no one looks that great.  Sorry. If this work has a plot, it is putting Ballezza in her place.  Eventually you'll look ugly just like us.

Bellezza and her unnamed boyfriend attend a party where drugs are taken.  They are seen passing the drugs around by kissing.  Then suddenly first boyfriend and then Bellezza faint.  Both are taken to the hospital where boyfriend is declared dead.  He makes many more appearances, sometimes only in his underwear, without actually seeming alive.  Bellezza both does and doesn't recover.  Mostly her mascara runs, which is sort of ugly.  She is teased by pleasure and lectured by time and disillusion.

This staging worked pretty well but bogged down in the center.  In Zurich amusing things went on behind the main singers, and that happens to a certain extent here.  The biggest problem is that there is no Cecilia or even Anna Bonitatibus to keep us amused.

Minkowsky is wilder and more exciting than Emmanuelle Haïm.  Here's what I heard in Zurich.

Disinganno does not translate as disappointment, but rather as freeing from illusions and delusion (a bit like Wahnfried....)

I needed a single English word and this is what everybody shows.

The Triumph of [over] Time and Deception

The score, revisited throughout Handel’s entire career in one way or another. The final and 58th stanza of Pamphili’s dramatic poem, in which “Bellezza” has the final word, gives the neo-platonic theme--transcendence of the illusions of earthly love for the divine eternal. Think Botticelli. Think Roman rococo.

O, you, th’elect ministers of Heaven,
No more shall see in this my breast,
Faithless desire, and vain passion.
And if I have lived, unworthy of God,
You guardians of my heart,
To Him carry the new heart.

Guardian angels, oh, protect me,
And in Virtue's path direct me,
While resign'd to Heav'n above.
Let no more this world deceive me,
Nor let idle passions grieve me,
Strong in faith, in hope, in love.
Guardian angels. . . da capo

I’m 80 now and time is triumphing.