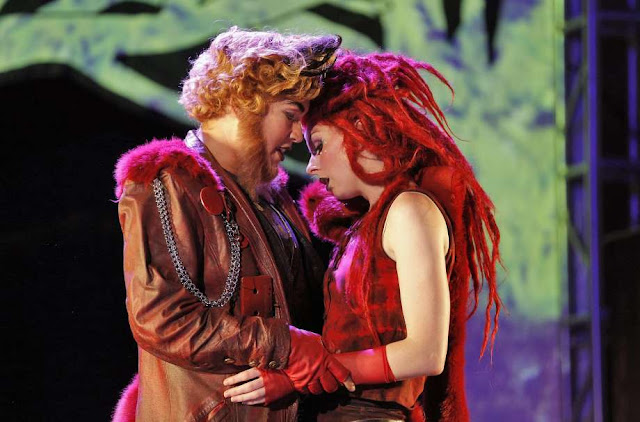 Gold-Spur, Sharp-Ears.    Photo by Cory Weaver.
👍🏻
The story of The Cunning Little Vixen by Leoš Janáček, composed 1921-23, is from a serial that ran in a Czech newspaper.  West Edge Opera presented it in the Oakland abandoned train station as a series of titled vignets.

There are a number of anthropomorphized animals in this story, sometimes recognized, sometimes not.  My favorite recognition was seeing a group of women dressed in white and thinking "Chickens.  Those are chickens."  The chickens come with a rooster.  The humans understand what he's there for, but the hens don't really seem to.  Vixen escapes her captor after killing the rooster because he lords it over the hens.

It was visually delightful, and musically fun.  It is possible to stage this opera from either extreme of delightful children's story or tragedy, or anywhere in between.  I think our production has certain adult features but is otherwise on the fairy tale side.  Vixen dies and is replaced by one of her children.

My favorite performers were Amy Foote as Sharp-Ears and Philip Skinner, a favorite at West Edge.

The orchestra included what appeared to be an electronic marimba.  This I've never seen before.  West Edge has recently established a very high standard of performance, and they have met it here.  Go if you can.
Posted by Dr.B at 5:58 PM