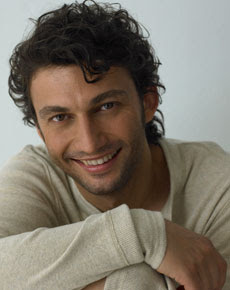 By the end of the concert it was clear that Jonas Kaufmann had never played Berkeley before. All those people standing and shouting at him made him feel like he was required to keep doing encore after encore. I kept waving at him as he passed by, and finally he turned and waved good-bye to the audience and was gone.

My take on the five encores was three Strauss Lieder, "Dein ist mein ganzes Herz" from Das Land des Lächelns by Lehar, and Schumann's "Mondnacht." The last, I'm sure, was just for me.

Jonas in white tie and tails and his accompanist Helmut Deutsch are such serious artists, I feel inadequate. It was a very serious concert, the first half all Schumann, the second all Strauss. They worked together with great sensitivity, both to the music and to each other.

What separates a Lied from a mere song is the piano part. The text is painted in the accompaniment. In Schumann the singer is often required to wait patiently while the musical idea finishes in the piano. Jonas is intensely restrained and dignified in his recital manner while finding the expressive core of each piece.

The beauty of his tone and the intelligence of his interpretations make Jonas Kaufmann the German singer of his generation, and maybe a couple of previous ones.  Anyway you look at it it was a very fine concert.  They are going for class all the way.

CDs and DVDs were on sale in the lobby: Carmen, Werther, Lohengrin and his last two aria albums, but my favorite, the Strauss album, was not on display.

We got five encores in Los Angeles...
welcome to Kaufmannia....