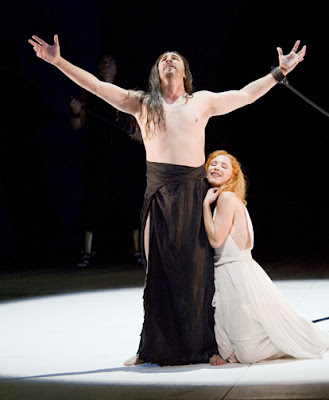 I loved seeing this again.  I mean, of course, Salome from the San Francisco Opera.  I saw it live here, 11/2/2009.  Each of the main characters represented their role to a T.  This opera is based on a play by Oscar Wilde and follows the original closely in German.

The biggest problem with Salome is that Salome is 15 and the voice required to sing her is about 40, I would say.  Nadja overcomes all this.  She convinces as a young woman insanely in love.  I don't know what would improve on this.  In the house I could not see the dance well enough to tell what was going on.  It turned out to be very sexy and merely suggestive of nudity.

I also found Greer Grimsley beautiful and believable.  This Johanahan might lure young women to follow him with his charisma.

As an overall theatrical experience, this may just possibly be the best.  I'd have to watch Maria Ewing again to be sure.

Lorraine Hunt Lieberson has left this to comfort us.  This is the first time I have felt a singer truly understood this aria.

Live from the Royal Opera 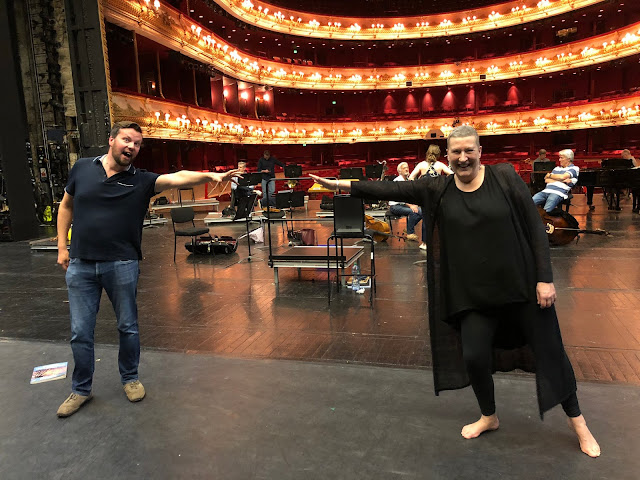 Today at 11:30 PDT we were treated to a live performance from the Royal Opera House in London.  The photo is of a rehearsal with David Butt Philip, tenor, and Dame Sarah Connolly, mezzo-soprano, preparing Mahler's Das Lied von der Erde.  This is one of my favorite things in the whole world and could simply not be missed.

The ensemble orchestra was conducted by Antonio Pappano.  The chamber orchestra seemed to include only one instrument per part, including 2 violins, 1 viola, etc.  This seemed to work fine.  In the live performance there was also no audience.

Before the Mahler, Vadim Muntigarov performed a short piece representing the Royal Ballet.  There was a small fee to support the opera house.  I loved it. 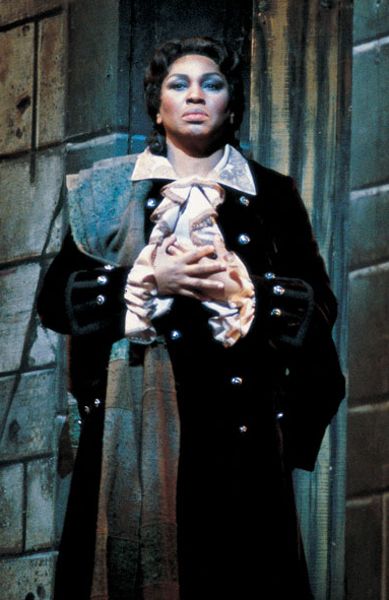 The live stream from the Met today is Leontyne Price's last performance at the Metropolitan Opera of Verdi's La Forza del Destino, March 24, 1984.  This was also one of her signature roles.  The first scene makes a lot more sense than the Munich version with Jonas and Anja.  There the whole family sits around a table.  In this version people come in and out depending on whether they are relevant to what is going on.  Talking about eloping with the father there is pretty silly.  The shooting is handled well.

In fact I think perhaps this is the most sensible production of Forza I've seen.  They are in a war and wear military uniforms.  What a concept.  Giuseppe Giacomini and Leo Nucci both look and sound similar.  One must work out a method to tell which is which. It is hopeless to choose who is better.  The cast for this performance is excellent from top to bottom.  Isola Jones is my favorite Preziosilla.

But we are here for Leontyne Price.  She is a singer to love.  Her Verdi is like no one else's.  She puts her own personal magic into the Italian's line.  Thank you for all the joy you have brought us.
#ad
Posted by Dr.B at 10:58 PM No comments: 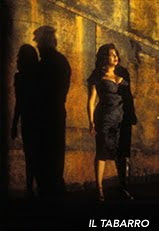 Michele-Paolo Gavanelli
Giorgetta, Michele's wife-Patricia Racette
Luigi-Brandon Jovanovich
It's hard to like this opera.  It's rough and nasty.  Since their child died, Giorgetta has grown tired of her husband and their life on a barge and flirts with his employees, including the incredibly handsome Brandon Jovanovich.  In this opera Patricia Racette is overdressed for her environment.  However, they are in Paris, Giorgetta's native city, so we will cut her some slack.  There is much wonderful singing from our three stars. 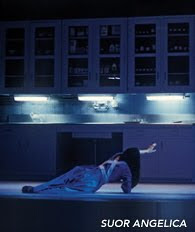 Catherine Cook-Sister Monitor
Patricia Racette-Sister Angelica
Meredith Arwady-The Abbess
Ewa Podleś-The Princess
I realized watching Suor Angelica that I could not be a nun.  Obedience isn't something I do.  I guess that leaves out the army, too.  My mother knew exactly how to deal with this.
This opera is deep with religious significance.  Angelica has had an illegitimate child, it was immediately taken from her, and she was forced into a convent.  She has been here for 7 years with no news from her family.
Then suddenly out of the blue a high class carriage carrying her aunt appears.  The aunt is here not to see Angelica, but to get her signature on a document that disposes of the family wealth and titles.  Angelica has to ask to find out that her son has died.  These two together are wonderful singing actresses who thrill us and break our hearts.
Angelica knows about herbs and plants.  In short she knows how to poison herself and does.  She realizes perhaps before it is too late that she has committed a mortal sin, and begs the Madonna to forgive her.
Only Patricia Racette and Ewa Podleś came out for bows.  They were both magnificent, towering performances.  This was Ewa's San Francisco Opera debut.
Gianni Schicchi 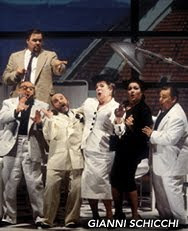 Michael Harvey-Buoso Donati
Meredith Arwady-Zita
Paolo Gavanelli-Gianni Schicchi
Patricia Racette-Lauretta
Someone smokes in all three operas, but in this one they all do, are in a hospital room.  It is amusing that Buoso Donati gets a casting credit since he's already dead.  It would be strange to play a dead body.
The house that Gianni Schicchi acquires is apparently in a high rise next door to the Duomo in Florence.  There is, of course, no building in Florence anything like that.

Magnificent in the dual roles of Michele in Il Tabarro and Gianni Schicchi was Paolo Gavanelli. He was both very funny and terrifying (in the appropriate places--not very funny as Michele and terrifying as Schicchi).
This is Patricia Racette's masterpiece where she triumphs in three different roles.  Hers was by far the silliest "O mio babbino caro" I've ever heard.  Her Lauretta is virtually a child.
I loved seeing it again.  Original review here from 2009.
Posted by Dr.B at 7:41 PM No comments: