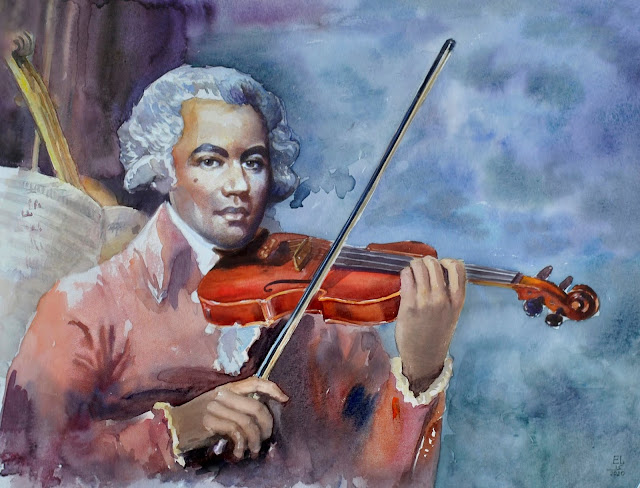 The project I mentioned here will have its first showing on August 27.

I attended this first showing, and my friend Omari Tau turned out to be the star.  The life of the Chevalier was dramatized with all the other characters portrayed in silhouette.  This film was created for educational purposes and should not be confused with the movie Chevalier de Saint-Georges starring Kelvin Harrison Jr. 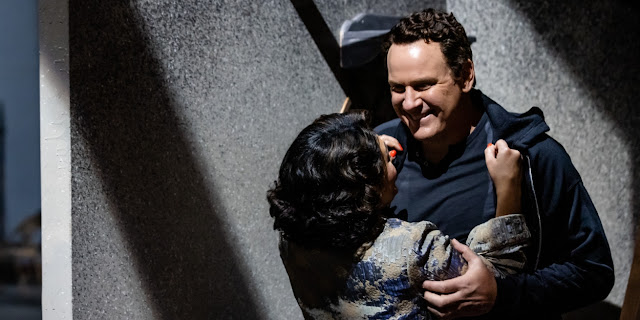 You can see this cast of Leoncavallo's Pagliacci from the Lyric Opera of Chicago is impressive.  This copy has no subtitles in any language, so I have to rely on memory.

My memory, such as it is, tells me that this is the opera where they say "a venti-tre ore." Venti-tre is 23, so that means all are invited to a circus performance that begins at 11 pm. In Italy they might actually do this. They have dinner at 8 or 9 pm and go on from there. The American translations usually pretend it's earlier.

However, this is regie and the things going on have little to do with the original plot.  Here our theatrical troop is the cast of the TV show The Honeymooners.  It might very well be playing at 11 pm. They give out Pagliacci t-shirts to the chorus/audience.

Nedda, wife of Canio in both show and life, is tired of her husband and has become interested in Silvio, apparently a stagehand. She sings about this. The beautifull sung prologue is outside the Lyric Opera, and subsequent scenes are inside. Nedda sings in the wings next to the cables to draw the scenery. It's show business. Tonio wants her too. He goes after her and she hits him with her purse.

The second act is the comedy.  This is the Kramdens from the Honeymooners, apparently.  Forties/fifties furniture and clothing.  It's also in black and white like the TV show.  Adorable.  I believe Ralph was also a bus driver.  I have to say this concept completely works.  When the camera shows the stage and the wings, the color comes back.

These are all wonderful singing actors who bring this all to life.  I'm a Quinn fan and enjoy his work here, but his part is not large.  There is an argument on the internet over who gets to say the final line.  Apparently, in the score it is Canio who has just stabbed two people.  But here it is Tonio who plays Ed Norton.  "La comedia e finita.?

If you can find it, watch it. 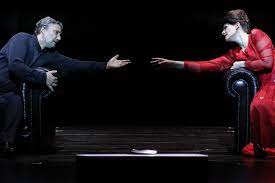 This is Wagner's Tristan und Isolde from the Bayerische Staatsoper.  It's a regie production, naturally.  Almost everything from there is.  I'm not sure it provides a context.  They all wear modern clothing, and we don't seem to be on a ship.

Tristan has traveled to Ireland to bring back the future bride of King Mark of Cornwall.  He is there in his official capacity as representative of Cornwall.  Actually Tristan and Princess Isolde have an already existing relationship.  In a war between the two kingdoms, Tristan has killed Isolde's fiance and been seriously wounded in the process.  Isolde with the help of Brangäne nursed him back to health.

On the journey she tries to order him around.  He remains distant and sends his assistant, Kurwenal.  This bit is not precisely clear.  Brangäne prepares a potion that Tristan and Isolde are to share.  Tristan drinks half, and then Isolde drinks the rest.  They seem to think it will kill them, but instead they fall hopelessly in love.  I thought the sudden falling in love was well handled.  We appear to be doing social distancing in this production.  No one touches in this part.

Isolde keeps turning the lights on and off.  I'm not sure what that's about.  I've never seen this character portrayed as perverse.  A feature of this production is that we see the characters live on the stage and projected on the wall in the form of a film at the same time.  Brangäne blames herself for administering the potion, but Isolde blames the Love Spirit who spreads love all around.  Isolde sees herself without love as destined for death.
I am an hour and a half in and did not ever before realize what a bear of a part Isolde is.  Other characters make brief appearances.  Finally Tristan enters and they talk about their time traveling to Cornwall.  She feels that she loved him then, but he was there in the role of foe.  Now they cannot simply forget that they love one another.  There is much discussion of which is better:  day or night?  Night is chosen.  Tristan wants to die.  The picture above comes from this section.
In the real world they sit in chairs and sing, but in the film behind they meet in the bedroom.  I don't know why I like this, but I do.
They sing for a long time about death, then suddenly they take needles from a bowl on the table and give themselves shots.  Death?  The bed in the background is suddenly surrounded by water.  Then people begin to enter.  They are discovered.  King Mark tells his story, that it was Tristan who thought he should marry.  Isolde is hearing this story for the first time.
This hardly seems like the same opera.  We want these two singers together in this opera because they are together emotionally.
Isolde says that she will follow Tristan to his home.  Melot, the betrayer, complains and the two men draw swords.  The bald person reappears.  Melot stabs Tristan.
Act III
Bald people in uniforms drinking coffee?  This part of the production I don't get.  Tristan sits with them and drinks coffee.  Next to him they look like children.  All but one appear to be puppets. A return to childhood?  An English horn plays on the stage.
Kurvenal sings to the puppet Tristan while Jonas sings.  Then they exchange places. The puppet in the yellow blouse is Isolde herself.  I don't think I realized before how little time Tristan and Isolde spend on stage together.  I feel like I have never seen this opera before.  Opera's greatest singing actors have brought it to life as never before.  Absolutely stunning.
Old age advice.  Do not mourn that your love cannot be fulfilled.  Rejoice that passion can come to you.
Posted by Dr.B at 7:11 PM No comments: 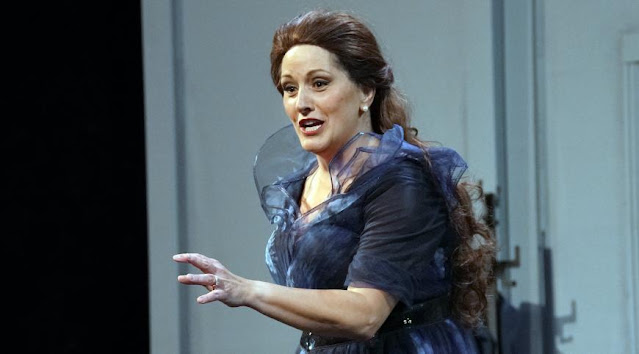 Leoš Janáček's Káťa Kabanová (1921) played at the Bruns Amphitheater in the East Bay hills as part of the season for West Edge Opera.  It's sunny and hot when the sun is shining on you, and cold when it isn't.  You may rent yourself a blanket.  Luckily I brought a hat and a jacket.  This is normally the venue for what is lovingly called Cal Shakes, meaning UC Shakespeare, I assume.  Adjustments were made to accommodate the orchestra who played from under the stage.  In the current era where performing before an audience is difficult, I suppose they were lucky to get it.  I felt that the heat/cold situation was extreme and the acoustics, particularly for the singers, were bad.

I have seen this opera before at the San Francisco Opera before I began blogging.  I remember only the part where Katya throws herself into the Volga.  I felt that this staging introduced the characters and their relationships more successfully.  The stage didn't become cluttered with irrelevant people, because the tiny chorus seemed always to be offstage.  Everyone dresses in modern clothing.  The singers for Tichon and Boris look similar, but were clearly distinguished through their costumes.

This opera would probably best be described as verismo, concerned with the hum drum problems of ordinary people.  Katya and Tichon love one another, but then there is the boss/mother in law who expects to be always the center of attention.  She runs a business and Tichon works for her.  Katya seems to want to be a good girl, and when it transpires that she cannot manage this, she wants to be punished.  She goes around asking everyone to accommodate this desire, and when they don't, she kills herself.

I am a fan of Carrie Hennessey whose character pretty much carries this opera.  (Pun?)  I enjoy her work, and felt that the cast did a fine job.  This is not in line to become a favorite opera.