The rise of Jonas Kaufmann 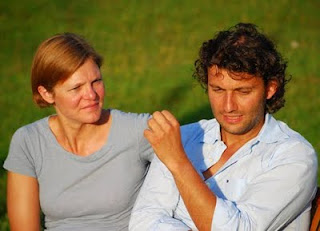 I feel proud to have witnessed the rise of the career of Jonas Kaufmann. When I first began writing about him there were only about 3 videos of him on YouTube. Now there are over 600 without duplicates.

On 1/23/2007, almost three years ago, I wandered quite by accident into a performance of Fidelio at the Zurich opera. I described him as "a Florestan to die for." I was going for the opera rather than the performers. I immediately pegged him as a Heldentenor. And here.

By March he had made my sexiest list. A year later I was calling him "my boy."

Well, I guess he isn't mine any more. Everyone is flying to Milan to hear him in Carmen. They love him all around the world. Congratulations, Jonas. You deserve it.

The woman in the picture is his wife.

P.S. I feel I must add a footnote. I knew Jonas existed long before this because I saw him in Nina, La Pazza per Amore, the Paisiello opera filmed in Zurich with Cecilia Bartoli. What changed in the Fidelio performance was the idea that he might be significant for something besides his looks.
Posted by Dr.B at 7:09 PM

Are you sure it was only 2007 you discovered him, because you left a comment on my photo of him and me together in December 2006. He'd made his Covent Garden debut in 2004, to rave reviews, and already had quite a following in London, so it must have been long before 2007 you found him.

I knew he existed before that. He is, after all, the sex object boy friend in Cecilia's video of Nina, Pazza per amore. 2007 is his first blog entry.

I have been a fanatic since I heard him on the MET broadcast of Traviata - I think it was 2006? bought all records and CDs since, last year made a trip to chicago for Manon, and this fall to Munchen for Lohengrin.
Have been calling him Mein Jonas... and now he is truly UNSER.... what a joy to see him finally make it in the big world... he deserves every bit of it.