Tales of Hoffmann in HD 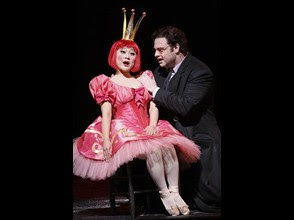 Here is the cast for the simulcast from the Metropolitan Opera of Les Contes d'Hoffmann broadcast live on Saturday:

The director, Bartlett Sher, has obviously read my idea of staging an opera as Austin Powers. Olympia's father, Coppélius, was dressed as Dr. Evil. I waited in vain for him to raise his pinkie.

The production was fun and didn't quite know what it was doing. Kathleen Kim was exactly what she was supposed to be.

In this production Nicklausse hovers in all the scenes, controlling and ultimately destroying all of Hoffmann's relationships. Why didn't I notice this before? Nicklausse wants Hoffmann to have bad relationships so he will be a better poet. Did Goethe have a lot of unhappy relationships? (I always compare any poet to Goethe, the man who makes German sound good.) Kate Lindsay was charming and pleasingly androgynous.

I see now why Anna Netrebko wanted to sing Antonia. In her version the character is wonderfully intense and dramatic. On the HD screen she lies dead with a tear running down her cheek. I thought Anna looked good and sang well.

The three villains are always James Morris for me. Alan Held was ok I guess.

I can't make up my mind about Joseph Calleja. His voice has an odd flutter, but I thought his characterization of Hoffmann was perfect.

Following my disappointment with Opera Colorado's production of "Hoffman," I was feeling a bit apprehensive about seeing the Met's version. It was surprisingly delightful, with just the right amount of decadence. Adding this effort to his innovative staging of "Barber," Sher is showing himself to be a breath of fresh air in the world of opera directors. And I'm glad I'm not the only one who immediately thought of Doctor Evil. The subtext of Nicklausse's actions as you ascribe them makes perfect sense, although I always felt she acted as she did because she wanted Hoffman for herself.

I really enjoyed Alan Held's performance. About halfway through the opera I started to imagine him as Bertram in a future North American revival of Meyerbeer's "Robert le Diable" -- as if that will ever happen in my lifetime!

Apparently I didn't notice the prominence of Nicklaus before because the edition used for this performance revived some of her arias.