Cecilia at the Barbican 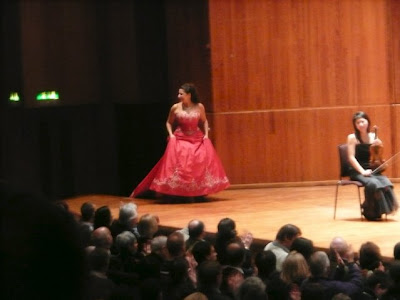 Cecilia Bartoli's concert Friday evening at the Barbican was a rousing success. The intention is to revive at least the flavor of the career of Maria Malibran, possibly the most wildly popular opera singer of all time. 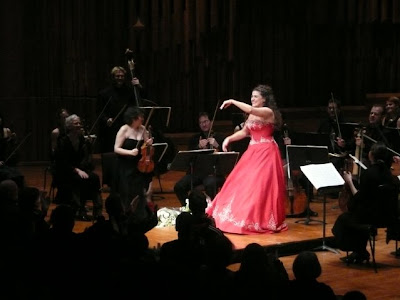 I'm sure Cecilia's outfit is intended as part of the reminiscence, a suggestion of the nineteenth century. She wore a pink strapless gown with a long train and silver decorations. Her hair was beautifully done as well, like someone from another era. Cecilia's particular beauty fits comfortably into a romantic world.

So why do we love her so? Cecilia scrupulously researches her concerts and makes sure every detail is authentic. She prepares. And then she comes before the public and plays with each piece like this was the most fun thing she could imagine doing. It is her pleasure that we adore. 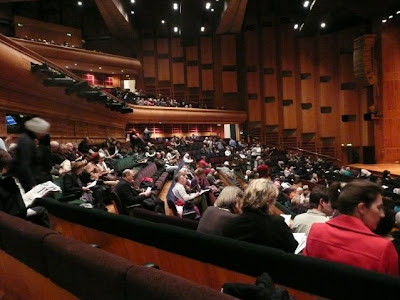 The concert was accompanied by La Scintilla, the original instruments group affiliated with the Zurich Opera. They are improving over time. Between Cecilia's numbers they played a varied repertoire that included overtures from Garcia's La figlia dell'aria and Rossini's Il Signor Bruschino. The latter was especially well done. They also played movements from Mendelssohn's Octet Op. 20, a clarinet concertino by Donizetti, and a violin concerto by Malibran's husband Beriot. 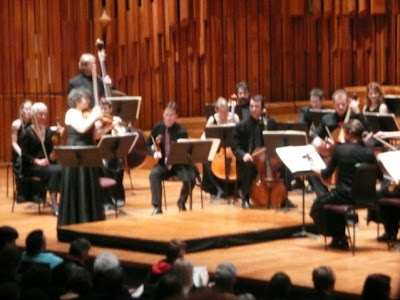 There is evidence of increased self-confidence by Ada Pesch who worked as soloist in Mendelssohn's Infelice and the Beriot concerto, as well as conductor/concert mistress throughout the concert. Usually she stood at her concert mistress chair and gave downbeats. Nevertheless there was still evidence of Cecilia conducting in a few numbers, especially the instrumental recitatives. My previous complaints were nowhere in evidence.

The balance of the concert was different from the recording. Cecilia has already recorded just about everything by Rossini. The Willow Song and Prayer from Rossini's Otello was on Cecilia's early Rossini album--it is a piece I very much enjoy in her voice and was glad to hear. The absence of Rossini makes the "Maria" album not quite reflective of the career of Maria Malibran. 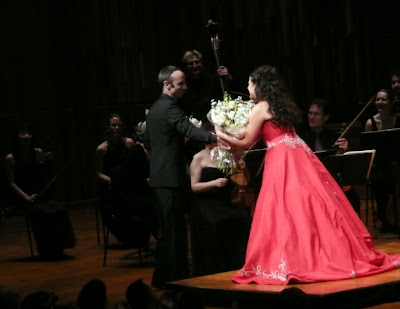 Cecilia has recorded the big aria from La Cenerentola twice and sung it in concerts throughout her career, sometimes in very matter of fact performances. She has reinvigorated it with flash, and repeated it as her last encore, this time with added flourish at the end.

The La Sonnambula aria was the only Bellini from the album that appeared on the program. Cecilia performed the Hummel variations as comedy, virtuosic comedy to be sure. She doesn't see herself as a yodeler, I guess. When you hear her talking so seriously about this repertoire, you don't really see this coming.

"Ratt-a-plan" was done with a snare drum as the first encore. Viva. 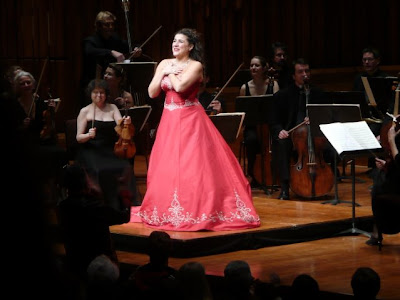 My pictures came out surprisingly well. If you click the pictures, they will blow up for you.
Posted by Dr.B at 4:29 AM

I've heard the concert too and agree wholeheartedly. But since you are so familiar with Cecilia Bartoli's art and herself, it would be wonderful if you described the concert and the backstage with some more details ?

Thanks for posting and Merry Christmas Jessica

I'm going to write more. It's hard to blog here. When I am home in a few days.

I envy you for seeing her in London, I´ve heard the concerts were even better than the ones she gave a few weeks earlier. And thank you for the pics, I love those natural/non press photos. I wanted to take a few at the Cologne concert, but people there are really strict about the "no photos" rule and I was sitting to far in the front to do it without anyone noticing.

sorry forgot to leave a name:

As you can see from the photo, I was in the middle of the back row of the stalls, not near any ushers. I was careful to turn off the flash and not to photograph during the music. Applause covered the very quiet sound of the shutter. I was careful, in short, not to annoy anyone. The people near me hardly seemed to notice.

Cecilia notices everything and probably saw me.

I agree that she notices a lot (especially in a concert when all her senses are "awake") and reacts in more ways than what most of the audience sees. But I think it would be a little over the top to expect her to notice "everything" or even every person in the audience. She´s not Wonderwoman after all ;-)

This is called hyperbole. I use it a lot.

Thanks for the photos ! Since I had to leave very quickly after concert I was unable to wait but did not see an autograph line. Did you happen to know if there was one and did you talk to her ? If so- how was she ? Curiosity...
Thanks again Jessica

I was told there was no meet and greet in London. I am placing this portion of my own fandom on hiatus.