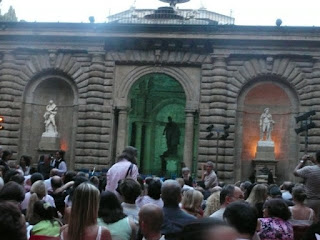 Last night was fun. We went to the Pitti Palace to hear I Filarmonici di Firenze. According to R the space holds the location of the first performance of Peri's Euridice for the proxy marriage of Maria de Medici to the king of France. I took pictures, and when I am home I will post a few. The open air space has pretty good acoustics, but you can't see anything.

The free concert seemed to be sponsored by the Associazione Mozart Italia - Sede in Firenze and there was a lot of talking in Italian, which we didn't understand. Certain nameless members of our group began making up things that they might be saying, with a resulting excess of merriment.

The Elgar piece is done in the US at every high school graduation, including mine, so we were definitely not happy with the encore and left.

Stefano Burbi conducted. He has lots of hair and flails around a lot with his hair flapping everywhere. He was flailing away, and they were quite draggy and stolid. This was curious. They were an excellent orchestra, but rather placid.

The unresponsive orchestra reminded me of my triangle player story. I went to a concert in London where the orchestra seemed to be playing so far behind the conductor that it was completely unrelated -- except for the female triangle player who played on the conductor's beat. Another percussion player rushed over to straighten her out.
Posted by Dr.B at 11:38 AM

This person that wrote this comment on this wonderful concert is really completely ignorant regarding music. And then, this person is in Italy: are Italians supposed to talk in English in Italy? And the orchestra and the conductor were one thing. Everybody noticed, not this person. Unfortunatly blogs today allow really everybody to make stupid comments like the comment that I have seen. Everything was great and nobody paid a penny for this... In short, the audiende enjoied a wonderful concert without paying anything.

I was not intending to criticize any Italian speaking person by pointing out the bad manners of my acquaintances. If you thought I was, I apologize.

I enjoyed the concert, too. They are an excellent orchestra.

Thank you for your answer: I appreciate. I only would like to add one thing: the conductor was incredible and wonderful: the orchestra was good because the conductor was excellent. In my opinion one of the best that I have heard. By the way, he is very well known and every orchestra love to have him. I have played with him in the past and believe me, his rehearsals are really great! The orchestra is always with him and they play actually for him!!! This is only one thing that I think it is very important.

There is something called the conductor's dance. His is quite elaborate. But I am enough of a professional to know that the real work is in the rehearsals and has little to do with the dance. I thought they were an excellent orchestra, but were obviously playing what was rehearsed--not a bad thing.

The Preludio concertante written by the Maestro Burbi is great!!!
This conduictor is a great composer and a great conductor!!!

I was in Palazzo Pitti last night: this conductor showed the music and the orchestra was really responsive! I was really impressed by his gentile manner to talk with the audience: nobody does, he does and he does very well!!! In my opinion (and I play in Germany) he is a great conductor, better than the famous ones.

Perhaps I should be more clear. I was shocked by how seriously the Rossini overtures were played while the Beethoven, a very serious piece, was excellent. It seemed to me he conducted a livelier Rossini.

Rossini was excellent: really I do not understand your comment, really... I was in Palazzo Pitti and everybody loved the interpretation of the conductor. Of course everybody are free to make any comments, but the reality is the reality. I am a specialist in musicology and I believe to know if a peace was perforemd well or not.

In Florence we are lucky because we have wonderful Piazza's where fine music can be heard in the open air.

You can keep track of some of these on our website.