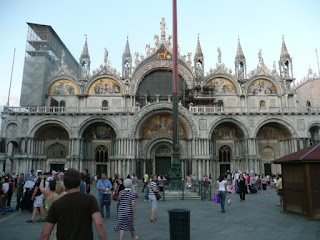 The basilica of San Marco in Venice is the location of a significant period of music history, starting with the polychoral music of Willaert. Orchestration started there. Heinrich Schuetz studied here and brought the Baroque to Germany.

So I was interested in hearing music in the space and attended the high mass for the Festa di Santissimo Redemptore. In the sixteenth century a second organ was built within the space, suggesting the multiple choirs of voices and instruments that were the main feature of music there.

The acoustics are marvelous for such a large church. There is a lovely decay and no echo. Perhaps it is the preference for curves over flat surfaces that makes the difference. There is a kind of mezzanine that encircles the entire basilica, providing locations for as many choirs as desired.

There is only one organ now, and only one choir sang for the service. My imagination supplied the rest. 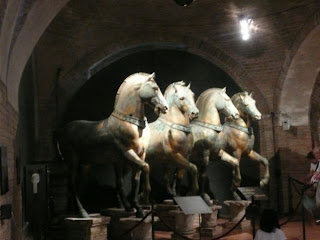