I finally made it to see the Metropolitan Opera HD broadcast of Bellini's La Sonnambula. I think it was worth reviving this to hear / see Juan Diego Florez in it, but that's about the only reason I can think of. 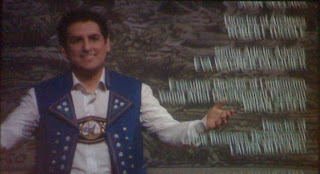 These pictures were taken with my new iPhone, and as you can see, they are dreadful. 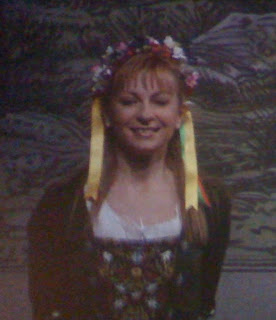 In the duets Amina is composed below Elvino, making them entirely wrong for Natalie Dessay. She commented in her interview that she noodled through the part waiting for the high notes. I forget what she actually said. She also said she wore some of her own clothes in Act I. Juan Diego then said, "I'm wearing my own socks." I had no idea he was silly.

I suppose I have to say something about the production. People in show business love insider stuff, people seen rehearsing, stuff like that. In the kind of rehearsal they were having in Act I there would be a piano in the corner somewhere and not an invisible orchestra playing. It had a kind of dissonance: when am I rehearsing and when am I real? The audience is required to guess.

Juan Diego Florez saved it from being a complete fiasco. Natalie did her sleep walking very nicely. In the old days (Jenny Lind) Amina always walked somewhere that looked dangerous so people could gasp and be terrified. Sometimes it actually was dangerous.

Deborah Voigt interviewed the prompter. That has to be a first.
#ad

I thought the interview of the prompter was very enjoyable. Even though I love JDF's voice, this particular production caused me to realize that it's always the same. It seems to me that a little of hearing him goes a long way. These days, Dessay is a better actress than she is a singer. Also, in the beginning of the opera I noticed a definite "catch" to her voice that made it seem like she was suffering from a cold or sore throat, but it went away midway through the first act.