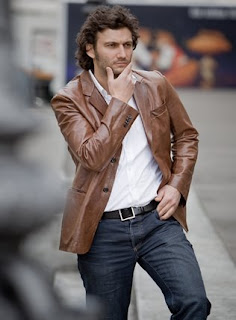 [This interview is translated, sometimes paraphrased, from Opernglas.]

Jonas Kaufmann oscillates this summer between Puccini, Verdi and Wagner. Before the Lohengrin premier in Munich he found time for a discussion with our coworker Dr. Thomas Baltensweiler. Selections from the discussion.

OG: Mr. Kaufmann, You will sing Lohengrin in a new production with this year’s Munich opera festival, your third Wagner role after Stolzing and Parsifal. How did the two parts feel?

Terribly well, that was a discovery for me. I felt that the voice opens up correctly again. In the center are not only loud notes, Parsifal is an outstanding example of how many places in this Fach are to be sung softly. Sometimes only one instrument accompanies. The combination of both, letting the voice go and soft, slender leading, makes it a lot of fun. But it means also an intellectual challenge to analyze and interpret each sentence. Because Wagner’s language is very pictorial and flowery, sometimes deficits in understanding are present, certain things simply are sung without first asking oneself what is behind them. Sentences end every now and then only after one three-quarter minute, so interlocked and complicated are they. To recognize this and then create a vocal phrase, so that the meaning is already apparent at first hearing, requires special concentration. With Wagner the characters are presented unbelievably broadly and comprehensively. Normally opera presents only vocal challenges; normal Verdi, apart from Otello, progresses relatively simply, there are no puzzles regarding role organization.

OG: Large parts of Lohengrin lie in the Passaggio range, the transition between the vocal registers. This is unpleasant for many interpreters.

Also Don Carlo or the duke in Rigoletto have to sing very much in this range. But here no cock crows thereafter because an Italian voice is used to master this requirement whereas Wagner roles are mostly settled in the lower central position, with few upward outbreaks, which require no real high notes. Lohengrin is Wagner’s Italian opera, one notices in the voice leading, directly in the ensembles the role stays for a long time in the unpleasant range, which is unique for a tenor part in the Wagner repertoire. Thanks to my experience in the Italian and French repertoire I do not feel this is so problematic.

OG: Munich lies not too far away from Bayreuth…

That’s right! (Laughs heartfully.) Here there are different ideas. We already took several approaches, which however failed for various reasons.

In 2010 there will be Lohengrin [at Bayreuth], which I will sing.

OG: Siegmund in Walküre is likewise planned. Does this mean that you concentrate slowly, but surely on heavy repertoire?


No, “concentrate” is the wrong word. I always tried to extend my repertoire step by step and would like to learn to know the whole range of the tenor Fach. I say „learn to know “ since it can happen that one does not want to sing a role after one has tried it out, or at least one wants to let it lie for a while. With Wagner Siegmund is the logical step after the Lohengrin. Siegmund is a relatively low part and from there completely different from Lohengrin, with which the Tenorale and not the Baritonale are in demand. But there are enough examples of singers, who sang both roles, I think of James King, who with Siegmund did not tighten up in the high notes. [?keine Höhenschwäche zugezogen hat?] I am a long ways away from thinking that after this I have to take on Tannhäuser, Tristan or Siegfried. But there are no plans for these roles for the next five, six years, not even thought about. I continue to sing Verdi and Puccini, and with my new album have again tasted Mozart blood. There are so many new roles, which one would like to learn, but it is sometimes an error to go back to "old" pieces.

OG: Also in Italian roles you, casually stated, are good at the business. Just now a complete recording of Butterfly appeared with you as Pinkerton. For a long time it was difficult for German singers to get a foothold in Italian roles and now several succeed. Is there a general explanation for it - or at least a specific reason for your success in this repertoire?

In any case that a conscious decision is the basis, that is with my colleagues surely not different. One may not give up. Also in Zurich, where we speak straight with one another, it was not like I was intended for the Italian Fach from the beginning. I had to wait for a long time before I received my first Italian role. Fenton in Falstaff perhaps was offered to me with the thought that I would reject it, because that was not a compelling or a dream part. In spite of this I immediately gladly agreed, because I love Falstaff - a complex piece -, and suddenly I got other parts, Don Carlo and Rigoletto - duke.

In order to look for a general explanation for why for a long time one hardly met German singers in Italian operas internationally: Perhaps it is because of the fact that in Germany the works were played for many decades in the German language. An Italian part in the German linguistic area sung in German, had advantages, that I must admit - not for the singer, but for the public, which understood more and for this reason was much more strongly involved. Naturally the singers could have rehearsed the parts in two languages, but that is unpleasant, because easily mistakes can be made. Certainly there were Gala performances, with guests in Italian and the ensemble members singing in German. Altogether it was the German singers because of the language who limited their ability to appear as guests abroad with Italian operas. Therefore German singers were not regarded generally as specialists for the Italian or French Fach.

OG: In the Zurich Tosca it was noticeable to me, how idiomatic your Italian sounds. How do you prepare for parts, in which you must maintain ground against the strong competition of colleagues singing in their native language?

Strictly speaking there is no strong Italian competition. How many successful Italian tenors are momentarily on the way? Whether anything could not prosper in Pavarotti’s shade - I do not know. Naturally there are many tenors with Latin language roots, such as South Americans. I am lucky in the fact that I speak foreign languages very well and do not have to make special preparations. I can read and understand the libretti immediately. I do not need a coach. Also concerning the style: One must have a little Puccini in the blood, one must be able to feel the emotions, which begin in the orchestra, and be able to be carried away by them. Then one is automatically on the correct wavelength. It isn’t easy to learn the right feeling. Perhaps the Italian opera requires simply temperament - there are also Germans who have this.

[Dr. B. His outline of his plans for Wagner conforms to my opinion. Isn't that lucky? His German is more advanced than mine.]
Posted by Dr.B at 8:50 PM