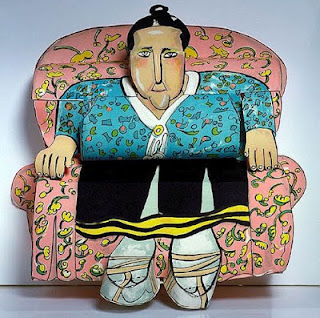 We had our Gertrude Stein summer last year, but when the exhibition moved to New York, there was much noise about the idea that in WWII she had been a Nazi collaborator.  Here is a paragraph from Wikipedia:

"With the outbreak of World War II, Stein and Toklas relocated to a country home that they had rented for many years previously in Bilignin, Ain, in the Rhône-Alpes region. Gertrude and Alice, who were both Jewish, escaped persecution probably because of their friendship to Bernard Faÿ who was a collaborator with the Vichy regime and had connections to the Gestapo, or possibly because Gertrude was an American and a famous author. Gertrude's book "Wars I Have Seen" written before the German surrender and before the liberation of German concentration camps, likened the German army to Keystone cops. When Faÿ was sentenced to hard labor for life after the war, Gertrude and Alice campaigned for his release. Several years later, Toklas would contribute money to Faÿ's escape from prison."

I don't remember any of this from my Gertrude Stein period.  What I do remember is that she lived hidden away in a small French village throughout the war, and that after the war she thanked her neighbors for their generosity and protection.

"Stein was politically conservative, though the nature of her opinions is debated. According to Janet Malcolm's Two Lives: Gertrude and Alice, Stein was a life-long Republican and vocal critic of Franklin Delano Roosevelt and the New Deal.  She publicly endorsed General Francisco Franco during the Spanish Civil War and admired Vichy leader Marshal Philippe Pétain, translating some of the latter's speeches into English. These unpublished translations included a favorable introduction in which she compared him to George Washington. Some have argued for a more nuanced view of Stein's collaborationist activity, arguing that it was rooted in her wartime predicament and status as a Jew in Nazi-occupied France."

I know that Stein was not big on fathers and can easily believe she said in reference to many political leaders of the time, "There is too much fathering going on just now and there is no doubt about it fathers are depressing."

Here the Metropolitan Museum of Art has amended their wall plaque.

What do I think?  I very much like my friend's quote from Sylvia Plath: "Every woman adores a Fascist."  Hind site is 20/20.  We in America have never experienced a dictatorship and project onto others our self-confidence about how we would behave in one.  They were unquestionably lucky to get out alive.
Posted by Dr.B at 8:02 PM