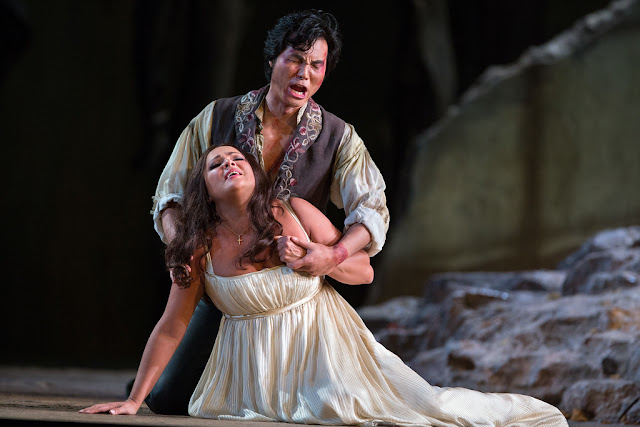 Heard in the theater during intermission of the Metropolitan Opera Live in HD simulcast of Verdi's Il Trovatore, "Does it get better than this?"  Followed by, "No!  No, it does not!"  It truly does not.

People get really confused by the plot of this opera, and I think the main reason is because it spends so much time explaining things that took place in the long ago past.  A young prince got sick right after he had been visited by a gypsy woman who seemed like a witch.  When the gypsy woman was taken off to be burned at the stake, her daughter Azucena kidnapped the sick child.  Then seeing her mother burning and her mother shouting out "avenge me," Azucena grabbed the nearest child and threw her own baby into the fire.  She kept the kidnapped child and raised him as her own.  This story gets told twice and then is referred to constantly by the different characters.  We would just rather watch the people we are seeing on the stage.

Azucena is really quite mad and is really quite happy when the son she has raised and loved is killed because at last her mother is avenged.  Yes.  Being avenged is what matters most.  And no one either sings or plays the really quite mad Azucena better than Dolora Zajick who owns this role.  She is the first block in the "four greatest singers" quadrangle required for this opera.

The plot on the stage is just your garden variety love triangle.  Both Conte di Luna and the gypsy Manrico love Leonora.  Manrico serenades Leonora and di Luna just lurks around looking dour.  It isn't hard to grasp why she prefers Manrico.  Enough about the plot.

Two, Anna and Dmitri, of this trio of singers are my absolute favorites in their respective Fachs.  (Or what is the plural of Fach?)  Much fuss was made over Dmitri because he is still in treatment for his brain tumor.  He spoke to us and thanked us for all the love.  His singing was powerful and emotional, a genuine experience.

A year ago after watching the stream of this opera from Salzburg I wrote, "I love Anna and find that she almost achieves the greatness here that she desires and will do so in the future."  I am very pleased to report that she has.  This is the greatest Leonora I have ever seen.  Her gorgeous voice is receiving spectacular attention to detail while retaining all of her wonderful emotion.  She is the opera singer for our age.

Yonghoon Lee would rate a lot more raves if he were in any cast but this one.  Nevertheless he was outstanding.  It was all in all an emotional day at the opera.

At the end the orchestra repeated their ovation of white roses for Hvorostovsky.  Be well, maestro.

Footnote.  The San Francisco Opera also uses the McVicar production for this opera.

I saw the same McVicar production in Chicago in the fall last year. Lee was the tenor, Stephanie Blyth was the gypsy. I don't remember the soprano. Saw the HD, Netrebko took my breath away. Lee always had a grimace on his face.

Just for the record... Maestro Verdi himself, did NOT think the gypsy was "mad" and put that in writing! So, if you think she is (and you've every right to your opinion), I'd say it's not based on Verdi's music, his intentions or the libretto!

Azucena is played a variety of ways. This time Dolora was definitely going for mad.