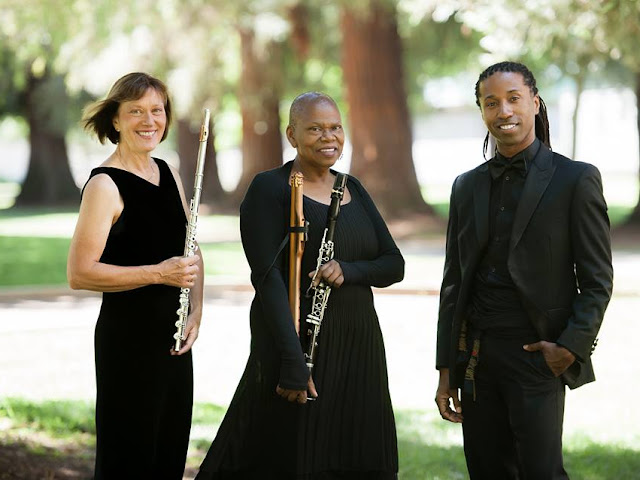 Trio MôD, seen above, gave a concert at the Guild Theater on 35th Street.  I felt surprised that I had never been here before.

Maki explained at the start of the concert that there is no repertoire for this ensemble.  So there is no Schubert or Bartok on the program.  One familiar name is the Bach/Gounod Ave Maria arranged by Pittman.  This is fun.

My favorite item on the first half of the program was Omari Tau's song cycle Did You Get My Text Yesterday?  Songs are added on an ad hoc basis when he receives a new text from his friend.  It is perhaps post modernist.  I would never text anything this long.

Virtually everything on the program was accompanied by spoken text and/or dancing.  The dancers represented TwoPoint4 Dance Theater, Sac State and River City Taps.  The spoken words were generally on the subject of Oak Park, the neighborhood around the Guild Theater.  The most coherent was the part about the race riots in the 60s.

I think they are interesting and enjoyable, but a bit ahead of their context.