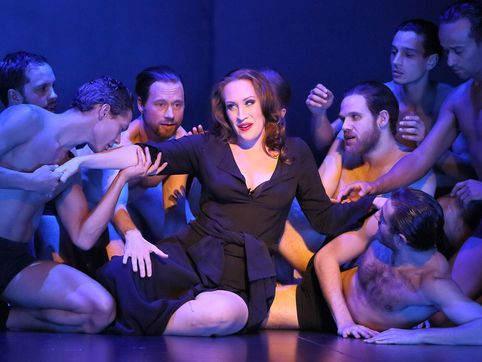 I don't think of Ariadne auf Naxos by Richard Strauss as a dark opera, so I was not exactly comfortable with all the black, especially in the second part.  On the live stream it was hard to see.  I think you could fake this with the technology and make it a bit lighter.

We begin in a mirror lined room, like a ballet studio only without the horizontal bars.  People are dancing.  The two entertainments must be performed as one because (as we know from the original Ariadne) the wife has requested fireworks when it gets dark at 9:00.  There is much dressing and undressing, which was wonderfully amusing, by both ballet men and singer men.  Very dark set with almost nudity.  For me this is incongruous.  They almost have to take off their clothes before we can see them at all.

I'm not sure why we love this opera.  Because it's successfully silly?  Or is it because it includes two of the greatest arias in the German repertoire:  "Es gibt ein Reich" and "Großmächtige Prinzessin".  This was an excellent cast from all over the opera world.  For me the highlight of the performance was Amber Wagner's "Es gibt ein Reich."  Glorious.  I can't think of when I've heard it better.  Brenda Rae approached "Großmächtige Prinzessin" more from a sexy/romantic direction than the usual showing off.  She was previously seen in Die Schweigsame Frau.  Both of these women are American.