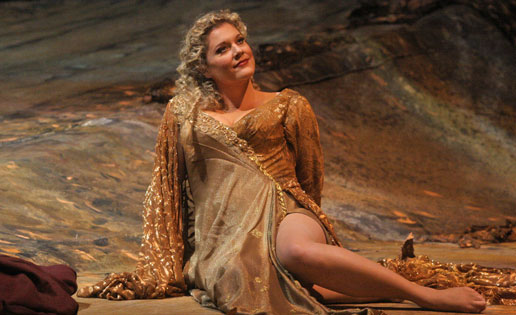 This production of Wagner's Tannhäuser premiered in 1977 with the same conductor, James Levine.  He is looking very fragile these days.  I am certain that a man carries him to his chair on the podium, but this is not filmed.  We only see the man going back into the wings.  Nevertheless, musically it was an excellent Tannhäuser.

Wolfram von Eschenbach and Heinrich von Ofterdingen, called Tannhäuser, were real people, Minnesingers from the 13th century, though not precisely contemporary. The opera is based on the legend that Tannhäuser spent a year in the grotto of Venus before returning to normal life.  Wagner is interested in the idea of the true meaning of love, especially as described in German literature.

It could be argued that Wagner thought of this as being about himself.  He had throughout his life complex and stormy relationships with women, though none of them seem at all like Elisabeth.  To me she is the anomaly and not Venus.  When this opera was written, Mathilde Wesendonck and Cosima von Bülow lay in the future. 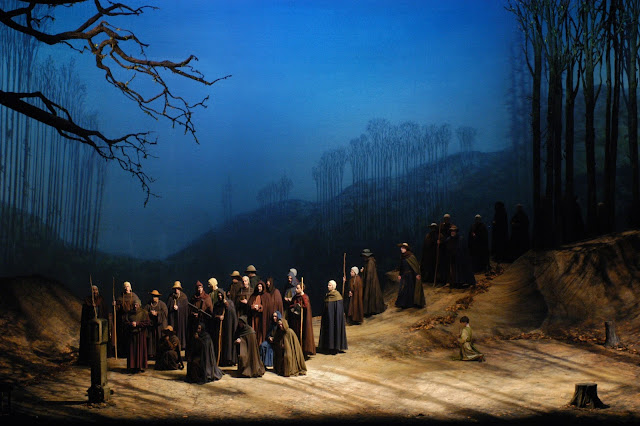 In the next scene he is found lying on the ground with his harp next to a roadside shrine to Mary.  Pilgrims pass by on their way to Rome.  Then a group of minstrels pass by and recognize him.  Wolfram convinces Tannhäuser to return with him to bring comfort to Elisabeth who loves him. 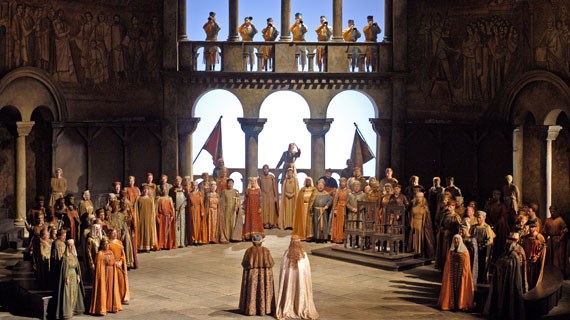 Elisabeth enters the hall of the singing competitions and knowing that Tannhäuser has returned, joyfully sings "Dich teure Halle" (treasured hall), the place where she fell in love with a singer.  This scene includes a singing competition where each contestant is to describe the true meaning of love.  Wolfram begins and describes an abstract and idealistic kind of love.  Everyone praises this except Tannhäuser who leaps up to sing that no one can know about love who has not been with Venus.  Everyone is shocked, especially Elisabeth.  Since this whole scene was arranged for the sake of Elisabeth, he realises he has messed up.  She pleads for them not to kill him, and he agrees to go to Rome with the pilgrims.

In this intermission Susan Graham interviewed the harpist Emmanuel Ceysson who is just beginning his career in the Metropolitan Opera orchestra.  In this opera he accompanies all of the many songs heard through the opera.  He started to speak in French, and Susan reminded him, "You have to speak English now."

Finally we return to the road seen in the second scene.  Elisabeth is there waiting for the pilgrims to return from Rome.  We hear the famous pilgrim's chorus while she searches for Tannhäuser.  If he is there, it means the Pope has forgiven him.  He is not, and she goes off and dies.  Wolfram sings the very beautiful "O du mein holder Abendstern" to the evening star, which curiously is Venus.  "Greet her as her soul passes by."  Peter Mattei sang this especially beautifully.

Tannhäuser returns complaining bitterly and wanting to return to Venusberg.  The Pope has refused him.  We see Venus pleading in the distance, but when Elisabeth's body is brought in, he dies, too.  Too late they realize that the staff has bloomed, indicating that he is forgiven.

May this production live forever.  It can be wonderful to have the story told with so much straight forward simplicity.  I want to praise all the singers for their emotional depth.  This includes the magnificent chorus.  The chorus master told us his favorite HD choral moments.  In four languages they were Prince Igor (Russian), Il Trovatore (Italian), Sayagraha (Sanskrit) and Die Meistersinger (German).

It is argued that we today do not care much about someone's soul, but I can propose the idea that we might care for someone who did.  Elisabeth, especially as beautifully played by Eva-Maria Westbroek, might be such a person.  She went transcendently from joy to shock to sorrow to death.  Botha sang wonderfully, and conveyed Tannhäuser's wild emotional swings.  Michelle DeYoung convinced us that she was Venus.

Thank you for an excellent Tannhäuser.