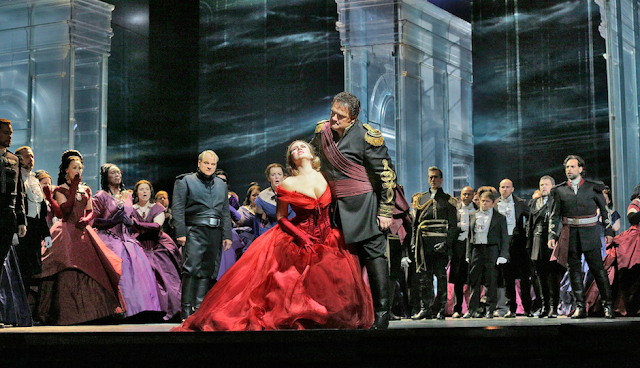 Saturday's Met Live in HD featured Verdi's Otello.  Many consider this Verdi's greatest opera.  I think it requires perfection to achieve that.  There is no sense of transition from recitative to aria, which leads to people calling it Wagnerian.  Bah humbug.

Otello has been the subject of a lot of talk since it opened in September.  People who don't know anything about opera are pitching for casting a black singer to play Otello.  Those of us who know things know that there are probably about 5 people who can sing Otello today and none of them are black.  Russell Thomas may develop into a great Otello, but he has already gone on record that he wants to keep his repertoire varied.

So we have Aleksandrs Antonenko, a Russian tenor with a huge voice who brought a lot of angry intensity to his portrayal.  I need an Otello who covers both ends of the emotional range and shows the transition from love to anger.  Željko Lučić as Iago was theatrically quite wonderful.  I would call him a lyric baritone who is stretching a bit to do Iago, but on the HD screen this was irrelevant.

My biggest complaint about both of these men is the complete absence of any Italian phrasing.  Each slid about 3 times in the whole opera.  Netrebko goes to great lengths to learn how to phrase her Italian repertoire, and you guys could do the same.  I wasn't sure if possibly Yannick Nézet-Séguin wasn't encouraging them in this direction.  A brief rehearsal was shown on the movie screen.  Dimitri Pittas shows a much more natural Verdi style, but the conductor was constantly trying to get him to square off the phrasing.  This is incorrect.  It is also the likely cause of the fact that Antonenko did not project as romantic in the early scenes.  It's less important for Iago who is always nasty.

Sonya Yoncheva sang with absolute perfection in her Italian style.  Never too much, never too little.  She was wonderful.  In the intermission she said that she had decided to portray Desdemona as a strong Italian woman.  It was a thing of beauty.  I wasn't sure I would like her, but I was completely won over.  The death scene did make me think of the issue, "Please remember that Otello kills Desdemona, but Antonenko does not kill Yoncheva."  Very important.  In the bows she tried to choke him jokingly.

I didn't mind the movable glass buildings though they did not project any sense of geographical location.  The plot was easy to follow.  This Otello was generally very pleasing.
#ad

Antonenko sang consistently flat from his initial stage appearance on through the duet that ends Act I; not egregiously so but by doing what my old voice teacher would have called "singing the underside of the notes." Someone must have kicked him in the butt between acts, however, because his intonation throughout the rest of the opera was right on pitch. Agreed that his phrasing (and that of Lučić) left much to be desired. Could it be that singers who grew up speaking Slavic languages have an innately difficult time with singing in Romance ones due to their "ear"?

Yoncheva was a great surprise and performed about as perfectly as you'd hope.

In supporting roles, my wife reminded me the last time "Otello" was a Met in HD production (that one starred Botha and Fleming), Michael Fabiano sang Cassio. We missed him here, although Dmitri Pittas was more than adequate. And speaking of Pittas (who bears a strong facial resemblance to a certain comic actor), during intermission my wife asked me, "Isn't there ANY movie we see these days that doesn't have Ben Stiller in it somewhere?"

I thought the movable glass partitions were a bit of a distraction although employed to great effect in the scene where Otello plays "hide and seek" to overhear the conversation between Cassio and Iago.

We'll be headed back to the theater on Wednesday for the encore.