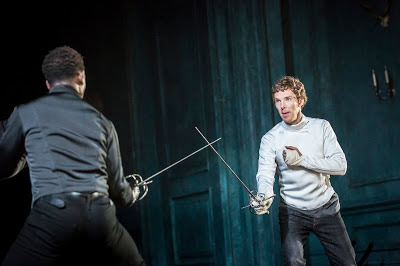 It was fun to see Hamlet simulcast from the Barbican in London.  This is the version starring Benedict Cumberbatch.  It was very much like a modern opera production with contemporary clothing and furniture.  At one point Hamlet wears a Bowie t-shirt.  When Hamlet is speaking only to us, the other actors freeze in place while Hamlet speaks.

The strongest feature of this production is the intense energy of Benedict Cumberbatch.  He is on stage for the whole first half.  The other actors displayed a wide variety of accents, something I have not experienced for Shakespeare.  Stage English is the standard.  Did this intend to illustrate class in the characters, or was it just a coincidence?

It starts with chandeliers and celebrations and moves through madness and accidental murder to a scene of utter devastation and ruin with dead bodies strewn about the stage.

It was fast paced and enjoyable.
Posted by Dr.B at 6:09 PM