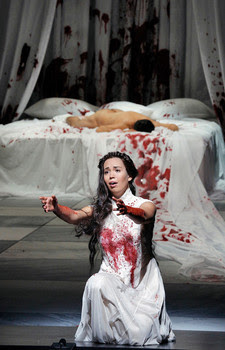 The San Francisco Opera presented a new production of Donizetti's Lucia di Lammermoor before I was tired of the old one.  There were some interesting features.  The female ghost appeared.  I believe this feature was introduced by Mary Zimmerman in her production, but now it is treated as an ancient tradition.  When Lucia sings about the woman killed in the fountain, her ghost appears.  Nothing else resembled Zimmerman who evoked the Scottish moors and retained the traditional giant staircase.  Here everything either resembled an interior or moved to something like outer space. 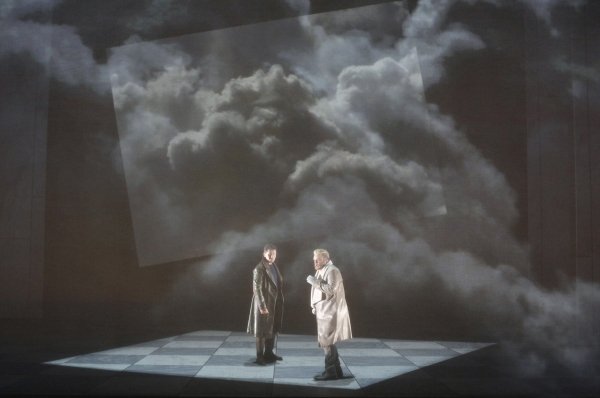 This picture is the scene of Edgardo and Enrico quarreling in the clouds.

The mad scene in Act 3 was the creepiest ever.  Everything is covered with blood.  Then Lucia pulls her blood-stained train toward us, revealing Arturo lying dead on the bed.  I was sitting next to someone who was once a super, and we agreed that this was perhaps the great super role.  He must lie there quietly with his pants pulled down halfway and his butt sticking out while Lucia sings her heart out.  Very impressive.  There was an entertaining interplay between the soprano and the flute here that we enjoyed very much.

Nadine Sierra performed this role previously in Zurich and seems to have benefited beautifully from the coaching there.  I felt that both her singing and her facial expressions were a treat.  I liked this Lucia, though her voice is somewhat small for the War Memorial.

Brian Mulligan, our Sweeney Todd, successfully made the transition to serious opera.  He was if anything even scarier here than his previous outing.  I love Piotr, but his voice may also be a bit small for our acoustically challenged opera house.

There are basically 3 ways to establish a costuming period for an opera.  First is the stated period, here the 17th century; second is the period of the first performance of the opera, here 1835, and last is something vaguely modern.  Curiously, our program says "TIME AND PLACE:  Scotland in the near-future."  This means category 3 and anything goes.  Most of the time Lucia wears a big dress like you see in the era of the American Civil War.  The men wear modern looking suits, sometimes uniforms.  Occasional kilts were seen, always in dark colors.  In the wedding scene the women all wore giant hats such as one might see at a British royal wedding.  People like to think they can pick a fashion period, but that seemed impossible here.

Luisotti was great.  This is the first opera I have actually liked this season.

At the end as Edgardo kills himself, Lucia appears as the ghost to escort him to heaven.  If this is a new tradition, I think I like it.  If it turns out to be an old one, let me know.