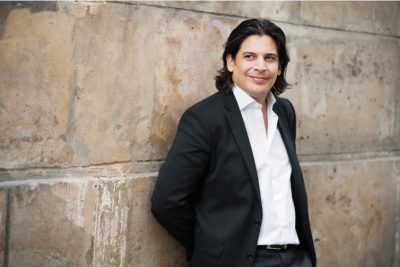 To finish the 2016-17 season of the Sacramento Philharmonic and Opera we were presented Verdi's La Traviata.  We were worried about whether or not it would be staged or cut.  I was pleased to see that the carnival music in the last scene was cut to just a few lines.  Otherwise the score seemed virtually in tact.

There was no set except a single stuffed green chair, but the acting was played out in full in the small area in front of the orchestra.  Since my seat is in the fifth row, I enjoyed this very much.  It is wonderful to sit so close to the performers.  I always say the best seat at an opera is on the stage.

We found that this was very successful thanks to the above named performers.  Our conductor faced and conducted his players with great skill and familiarity with the score.  He seemed never to look at the singers.  They in turn never looked at him.  See.  I keep saying this is possible.  One sings with the music.  It felt like a fully realized performance.  Minor characters were filled by members of the chorus who held book.  They seemed to be enjoying themselves.

This opera belongs to Violetta and rises or falls with her.  Our soprano Jennifer Black paced herself beautifully.  It is a long and arduous role.  Her phrasing was very beautiful and she died in style.  That turned out to be the purpose of the green chair.  She had a different gown for each scene.

We were lucky to hear Sol Jin, probably the only one ready for the big time.  His voice and his gravitas were perfect for Giorgio Germont.  He also provided the only small piece of comedy when Violetta sat on his hat.

Now is the place for some small comments.  The current management of this group receives most of its advice from people who manage instrumental ensembles.  Opera for them is just another concert.  I continue my seat, but I was here for opera.  They seem to spend more energy on pops concerts.  This makes me sad.

My professional career, such as it was, did not include repertoire from the bel canto, unless you count Maddalena in Rigoletto.  I was what used to be called a low and slow.  I sang in an era when Handel was still performed unornamented.  However, my library does include the standard cadenza book.  I learned Azucena but was probably not heavy enough for her.

I noticed that our soprano left out the cadenza and the high note.  This is, however, Sacramento, and I was hesitant to make a fuss about it.  I suppose the question at issue here is was it her fault because she wanted to save her energy for what remained of the role, or was a cadenza simply impossible when neither the conductor nor the singer are looking at one another.

So what do I actually think if I don't care about negative reactions?  I found that our conductor had conducted opera (Mozart e.g.) but not necessarily bel canto.  So perhaps his background is as weak as mine.  What would normally happen in a concert performance is when singer and orchestra get to the cadenza, the conductor would turn toward the singer and follow her home.  I reject absolutely that she should stare at him and in any way follow him.  You cannot do the cadenza and accompanying high note to maximum effect without just letting it go.  He should turn around and see what she is doing, although he may feel free to ignore her most of the rest of the time.  In our performance I didn't notice that he ever turned around.  It exists as a possibility that he was unaware there was something he was supposed to be doing.

I don't always want to point out every flaw in a performance.  The problem I am having with the organization reviewed here is that no one currently associated with it knows anything at all about opera.  When the staff included opera people, tv monitors were placed at useful locations around the house.

It's so refreshing to see that someone in Sacramento has an opinion about Opera.

I disagree with your comments about the conductor vis à vis the singers. In a symphonic concert the conductor conducts the musicians, that is true. In the case of an opera the conductor must breathe with the singers. It seemed to me from Saturday’s performance that José Luis Gómez has little experience in conducting opera because he was concentrating too much on the score. Furthermore, his up stage position made it impossible for him to have eye contact with the singers and, at times, the music sounded very mechanical to me. Mr. Gómez was lucky to have such great musicianship in the singers. I have been in performances in famous theaters where, had it not been for the conductor´s watchful eye and fast response, a singer’s faux pas would have ended up in disaster.

In my opinion, two types of sopranos are needed for the role of Violetta. For the first act, a soprano with clean coloratura cadenzas is needed for the “Sempre libera” cabaletta, and, if possible, with a high E flat (which is traditional although it is not in Verdi´s score). Jennifer Black lacked the cadenzas for the first act but was excellent from then on. I think she would make a great Mimi.

The tenor was too light and had an “ingolato” technique.

I loved Sol Jin´s rendition of Germont père’s “Di provenza il mar, il suol.” in the second act. I was amazed at his perfect Italian diction.

I totally agree with your last paragraph. The management must listen to people who know about opera, whether staged or in concert form. All they have to do is to look at videos of operatic concerts on YouTube to get an idea about placement of the conductor in this type of performance.

I would be curious to know who this is. I knew she skipped the high note and quite a few of the ornaments. But I enjoyed her performance quite a lot and didn't feel justified to point out flaws. For me music isn't hoops to jump thru.
The singers and orchestra maintained coordination remarkably well. I don't believe it's necessary to maintain eye contact all the time. Im speaking as someone with lots of experience who is extremely near sighted. As was Callas. I can recall performances where I never managed to find the conductor.

I brought upt the not-so-clean coloratura cadenzas to point out that a soprano who accepts the role of Violetta must be ready for the challenges of the role. Estelle Liebling, the famous opera coach, has a book of coloratura cadenzas published by G. Schirmer Inc., that sopranos should vocalize with, and which is still available for purchase. One must listen to Beverly Sills's coloratura cadenzas to know where she got her training. I believe that Jennifer Black should work on this in order to be more marketable. She has a beautiful voice with a velvety color, which I enjoyed listening to.

I found this on the net about an opera conductor. "The conductor of an opera orchestra is actually very important. He must make sure that the orchestra is allowing the singers enough time for their personal musical nuances and phrasing (and making sure singers come in at the right time, though top-level opera singers will know exactly when to enter) as well as stirring the orchestra to reflect what is happening onstage. It's actually quite a difficult job requiring no small amount of multitasking."

I don't know if you got your experience from loving the art and attending many performances, or from being involved professionally in the art. Personally, I was married to and managed an operatic Lirico-spinto tenor for over 30 years, who sang all over the world. I have also spoken with top-level singers and conductors about this subject. They all agree that, whether an opera is in concert form or a staged version, there must be eye contact with the conductor. Singers like Pavarotti and Domingo, with whom I have shared conversations on this matter, agreed that it is paramount, because they are not musical machines and have their own styles (and breathing techniques) that the conductor must take into account. There are many concert performances of the Three Tenors with Zubin Mehta on YouTube and you can see the wonderful communication between the singers and the conductor.

Maybe I'm reading you wrong, but when you say that the management must listen to people who know about opera, I feel you somehow agree with my point about the role of a conductor.

Saying that there would need to be constant eye contact means that the movement part of the performance would have to be dropped and the singers positioned in a static row across the front. For me that would have been a great loss. They were trying to give us staged opera without paying the bill for it. If you want to attack something, point your criticism toward that. The soprano's imperfections were probably not due to lack of eye contact with the conductor. Again I would address the financial aspects of the performance for the answer. The 3 tenors don't come to rehearsals, I think you will find. Our group seemed adequately rehearsed.

Let's just say I have both done and watched a lot of opera.

I apologize for entering into an uneven discussion with you. I wish you well with your blog and hope that as a dilettante you continue to keep opera alive in your heart and bring awareness to others.

If I see a performance where the singer or the conductor are obsessively staring at one another, I know there is on one probable cause: rehearsal has been inadequate. Such as Angela Gheorghiu at Zellerbach in 2008. I always remember the occasion when Cecilia Bartoli sang with the Wiener Philharmoniker without a conductor. She likes to conduct with her back.