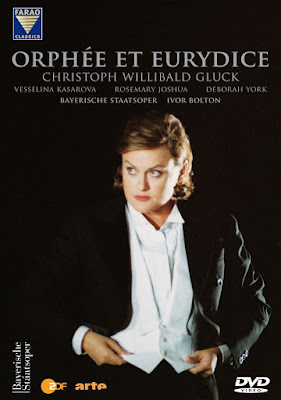 👍🏻
My education with regard to Gluck's Orfeo ed Euridice is woefully inadequate.  In part to compensate for this I have purchased this DVD of Orphée et Eurydice starring Vesselina Kasarova.  The other reason was to see more of Kasarova.

This is the version created by Hector Berlioz in 1859 for Pauline Viardot, making it a legitimate vehicle for a star like Kasarova.  The role in Italian was written for a castrato, and in French it is often sung by a haute-contre (French high tenor).  Only since 1950 has the role been taken by a countertenor.  At Glimmerglass I saw Michael Maniaci who bills as a male soprano.

The curious feature of this production is the genderless costuming.  Whatever style is on display, it is worn by both males and females.  I've always wondered what this would be like.  At first everyone is dressed in men's tuxedos.  The fires of hell are tended by laborers in bakers' hats. Then we see Greek outfits which look a bit odd on the men.  Then back to tuxedos.

An annoyingly large amount of time in this not that long opera is consumed by ballet.  If you are French, this probably is not a problem.  The chorus mimes an orchestra.  Vesselina does not play her violin, but she sings and acts gloriously.  To fully understand why Berlioz would make such an arrangement for Viardot requires that you see such a towering performer in the role of Orphée.  It is a tour de force.