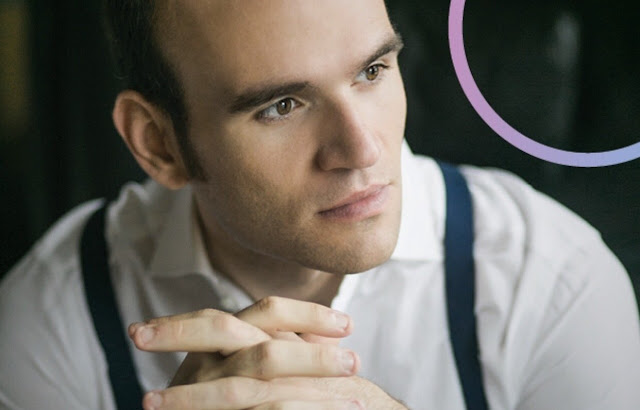 I went out in the pouring rain to see Michael Fabiano at Mondavi in Davis. His accompanist was Laurent Philippe.  He said they'd been working together 12 years.  We were seated at small tables on the stage.  This is an enjoyable intimate arrangement.

I have seen Michael live at the San Francisco Opera in Lucrezia Borgia, Luisa Miller, and Don Carlo.  In 2014 I predicted he would win the Richard Tucker Prize, and he did.  That was fun.  Next season in SF he will sing in Manon opposite Nadine Sierra, and at the Met next season he will simulcast in La Boheme.

I got the impression that Michael very much loves his chosen repertoire for this recital.

Four songs by Duparc (French)
Duparc is not performed nearly enough.  These were virtually theatrical performances.

"Kuda, Kuda, kuda" Lensky's aria from Eugene Onegin by Tchaikovsky (Russian)
This is very timely since it is currently playing at the Met.

Three songs by Barber, including "I hear an army" for a rousing finish.  (English)

He is a serious artist and does not hesitate to use his operatic voice in song repertoire when suitable.  It was very much worth the trip.  There were two encores: