In posting pictures for my review of the Live from the Metropolitan Opera in HD broadcast of John Adams' Nixon in China I have decided to go with reality instead of fiction. 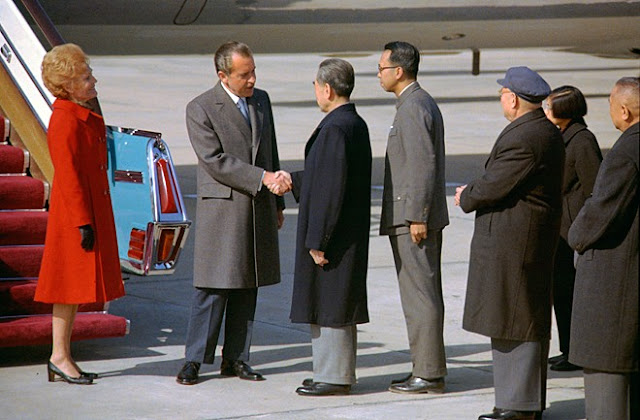 The above picture from left is of Pat Nixon (sung by Janis Kelly), Richard Nixon (sung by James Maddalena) and Chou En-lai (sung by Russell Braun.)  My favorite line in this scene is when Nixon says to Chou, "As we flew in, we looked down at the ground.  'Brueghel,' Pat said."  I am always looking for things to look like something from a painting, and liked it that Pat might do the same.

The production has done a wonderful job of reproducing the look of the real people and places.  Below is Mao Tse-tung (sung by Robert Brubaker) in his actual study.  The chair and wall of papers look much like the set. 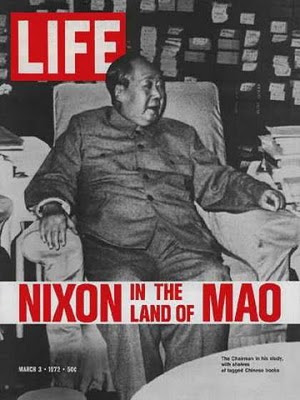 The scene in the opera of Nixon meeting Mao is definitely my favorite.  I had to search for quite a while to find a picture with everyone in it, except Pat, of course.  From left below are Chou, secretary, Mao, Nixon and Henry Kissinger (sung by Richard Paul Fink.)  In the opera the single secretary/translator is replaced by a trio of singers who repeat everything Mao says like a kind of sound halo.  Everyone says mysterious nonsensical things.  "Founders come first, then profiteers."  Kissinger declares that he is lost.

The events upon which this opera is based still lie in my memory, and they have omitted the part of the banquet where Nixon goes all around the room and toasts with everyone there one by one.  We just get Chou and Nixon toasting. 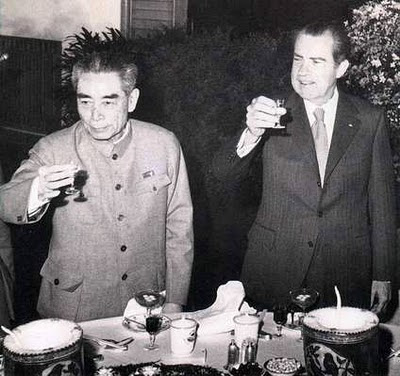 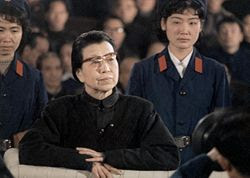 And this is a shot from the real Chinese ballet Red Detachment of Women. 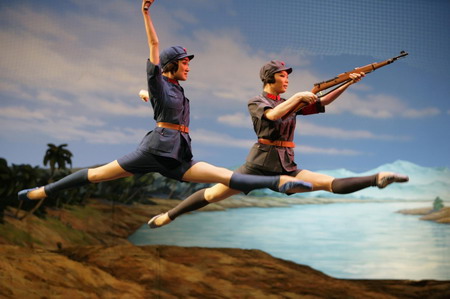 Why bring back the real events?  To show how close they are visually to the opera.  So what is one to make of the fact that in the opera all the characters except Pat and Chou are really quite mad?  It's part of its charm.  Nixon comes off pretty lovable which I'm not at all sure he deserves.

The Kissinger part is a double role.  He also plays the Simon Legree character in the play within the opera.  In his interview Richard Paul Fink said that when working with dancers, it's necessary to stay out of their way.  Not to hurt them.  It was a very physical part for an opera role.

I love Nixon in China.  I love the minimalist idiom which always enhances the action.  I love the "I am the wife of Mao Tse-Tung" aria.  I love the incomprehensible philosophy always lurking in the background.  I could live entirely without the hand job in the last scene.  In fact the whole last scene is extremely anticlimactic.

It was said several times that this is a modern masterpiece, and I am almost persuaded.  The people being interviewed were pleased to be performing this opera on the day after the Revolution in Cairo.  They made Mao and Chou seem to realize that revolution is only for a moment, like life generally.

John Adams conducted his own opera.

To me, Adams is sort of the anti-Verdi in one particular way. Whereas Giuseppe oftentimes provided a fairly abstemious background for his singers ("hung 'em out to dry" is how my wife describes it), John creates a wall of sound that seems almost unrelenting. Or as one patron sitting near me exclaimed at yesterday's HD cinecast, "If he's supposedly the king of minimalism, why are there so many friggin' notes?"

Too bad Maddelena was in such poor voice, although he's such a terrific actor in this role that he made the coughing and vocal distress seem like a natural extension of his character.

And does anyone else in America love his own job more than Peter Sellars? Well, maybe astrophysicist Neil DeGrasse Tyson.

The point with minimalism isn't that there are fewer notes--it's that they're the same ones over and over.

Hi Paul. I didn't really get into Maddelena and how it's time for him to kind of hang it up. It's just that he gets that look on his face that absolutely reminds you of Nixon.

I think in the opera they left out the spittoons.