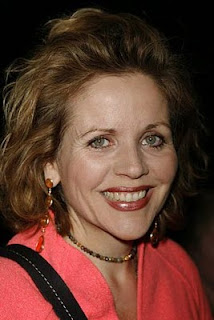 People are always jumping on Renée Fleming. Maybe she has a sign on her back that says "Kick me."

This reminds me of a story. When my son was about 10 years old, we were in the Marina Safeway, and he took a sticker off one of the watermelons and put it on my back. It said, "Try me. I'm sweet and yellow inside."

Never mind. My mind wandered. So on February 21, 2011, the New York Times ran a review for the return of Armida, and thoroughly trashed Ms Fleming. They trashed the production and just about everything else except Lawrence Brownlee, but that is not my concern.

Since I've started blogging, I've heard Renée Fleming twice live--in recital at Carnegie Hall and in concert at the Kennedy Center in DC--plus a number of times in HD. Before that I heard her in Streetcar, Hérodiade and Rusalka at the San Francisco Opera, and maybe other things.

Her voice was never that big. I have never heard her live at the Metropolitan Opera, but the acoustics there aren't nearly as bad as the War Memorial.  Hearing her in HD does not really give an idea of how she sounds in the house. But I can tell you that a lot of singers you would never suspect--Leontyne Price springs to mind--are simply not that loud in the opera house.

The young we want to hear for the vigor of their young voices. The older artists we hear for their art. Certainly Renée's voice has changed, as has also her body and mind. As an artist, she is at her peak. In fact it was just 2 years ago I wrote, "For my ear she is now singing her best ever. The middle of her voice is quite gorgeous while she retains her top."

I expected better of the New York Times.

Post script. Colbran, who created Armida, retired before she reached 40.

Renée isn't going to come out and blast you with sound to show an enraged Armida. Nor in my experience of her would she ever have.

For a lot of people, apparently Zachary Woolfe is one of them, criticism consists of deciding in advance what something is supposed to be like and then criticizing every departure from that preconceived notion. My son hated the movie Alice in Wonderland because Tim Burton changed the plot. Let's just say things are a lot more fun when you open yourself up to new ideas.

Mary Zimmerman's production wasn't for an enraged Armida. Giant insects emphasize the enchantment and charm of the situation. Renée sang the charm. What you are seeing is a woman's Armida.

What a wonderful blog. Thank you. I thought the same thing.

The problem with Mr. Zachary Woolfe's critiques is that they were uneven and, frankly, disrespectful.

He didn't like her. Fine. The fact is she brought Armida to the Met. She's the reason it exists, as she is the reason so much else exists there. Certain artists have earned some consideration. And all artists deserve to be treated as human beings, not machines.

If you look at the first review of Armida but another critic at the NYT, you see critique but also respect for artists as human beings - and respect for Renee for what she's trying to do by bringing Armida - and by singing a musical far out of her specialty.

the first review of Armida "BY" another critic....

And "by singing MUSIC far out of her specialty."?

I have heard Fleming twice in live performances -- "Il Pirata" at the Met in 2003, and "Otello" at Chicago Lyric in 2001. In the latter, I was sitting in the front row of an upper balcony. In the former, I was in the very last row on the main floor (UNDER the balcony).

In both instances I felt her voice carried just fine, and I had no trouble hearing her (a) over the orchestra and (b) as a distinct member of an ensemble. I've always been puzzled by the criticism she received, especially that which has been exceedingly virulent.

Christy makes an excellent point here, in that someone who has the "tickets" (quite literally, in this case) to cause opera houses to try a new production or bring back an underexposed classic deserves our thanks and our respect.

I've seen Fleming four times at the Met, in Peter Grimes, Rodelinda and twice in Rosenkavalier. I can understand some of the criticism that gets leveled at her regarding certain vocal mannerisms that have crept in over the years. But they're attached to a terrific voice. Anyway I've heard way worse things from the opera stage, some of which has been praised to the skies, so [shrug].

I have never had a problem hearing her in the house, so if that's one of Mr Woolfe's criticisms, maybe he should ditch his current seat for a better one in the nosebleeds.