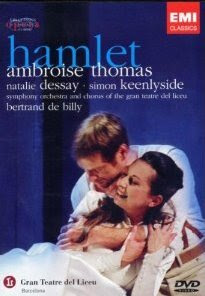 After seeing Hamlet from the Met, I felt a certain lack of completeness about the whole thing and ordered the DVD with Simon Keenlyside and Natalie Dessay. It needs Natalie. No one does mad scenes like Natalie. In this film she does coloratura while slashing her wrists. The minor characters are not as strong as the Met production, but this is definitely the one you want.

I have now seen both endings for this opera. The Metropolitan Opera simulcast used the Anglo-Saxon approved ending where Hamlet dies. This DVD shows a wounded Hamlet singing about going to be with Ophelie while the chorus hails him as the new king. He could still die from his wounds, but that isn't shown.
#ad

I agree completely with your assessment of this DVD performance. Although I think Simon did a better job in the Met's drinking-song scene than he does here, Dessay's presence in this Barcelona production is the ONE to see.

Also, I thought James Morris was horrible as the Met's Claudius, so anybody but him in that role is fine by me.