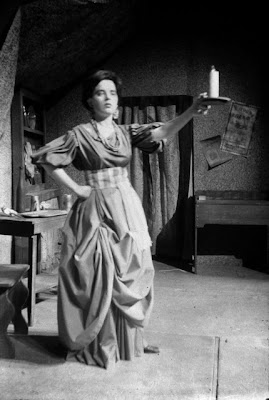 When I was 23, my college presented a fully staged version of Rigoletto with orchestra and the whole 9 yards. It has long lived in my imagination as something truly wonderful.

It turns out it has lived also on tape and now on CD. Lou Clayson who was a member of the faculty sang the Duke. Dan Elias who had had polio as a child and was genuinely crippled took off his brace and sang Rigoletto. My friend Gloris Blackburn was perfectly cast as Gilda, and I was Maddalena.  My mentor John Lewis was the conductor.

So yesterday I went to visit Gloris to hear the CD.   We looked at the old pictures and marveled at how young we were and how fabulous Lou looked in tights.  And how glorious it all sounded.

The orchestra was spectacular. John had a love/hate relationship with Verdi, complained about sopranos showing their tonsils on high notes and never gave an inch on tempos no matter how badly the singer was handling it. But the rhythmic excitement that is the heart of Verdi was stunning to the point of overwhelming.

It is nice to hear that he was as great as I had imagined him.

The singing is also wonderful. Lou didn't just look good. Dan had a very exciting tone to his voice, and Gloris was the perfect Gilda. She took all the high notes whether John liked it or not, and long stretches of "Caro nome" are completely unaccompanied, allowing the singer to add as much rubato as she wants.

I was fine. Gloris and I looked at each other and said "soprano."

I can't tell you how pleased I am to report that it was far more wonderful than I had remembered it.
Posted by Dr.B at 12:11 PM

Email ThisBlogThis!Share to TwitterShare to FacebookShare to Pinterest
Labels: Opera Only, Rigo