I listened to every version of "O malheuruese Iphigénie" from Gluck's Iphigénie en Tauride on YouTube and while the sound recording is not that great and there is no picture, Susan Graham owns this aria. No one comes close.

There is a cold going around. I had it 2 weeks ago, and today for the simulcast from the Metropolitan Opera Peter Gelb came out to tell us that both Susan Graham and Placido Domingo had it. They sang anyway, and Susan overcame a bit better than Placido.

You may have noticed strategically placed seats around the set. This is for the aging Placido who still has more power as a baritone than Paul Groves. 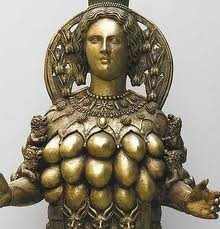 The production is colorful and used statues of the many-breasted Diana of the Ephesians to represent the goddess who rescued Iphigénie and carried her off to serve her as a priestess. No attempt was made to make the costumes appear to be Greek, but I still thought everything looked good.

There was some very effective wire work at the beginning and end. The deus ex machina descended on a wire.  The lady on the wire had only the normal number of breasts.

To enjoy this opera you kind of have to like Gluck.  When you think of all the vocal fireworks going on in Italian opera at that time, it can seem a little dull.  Actually you would only want this for Susan Graham who was magnificent.

I thought the costuming and set coloration was almost the perfect representation of a Brueghel tableaux. The whirling dervishes in the first act were a little annoying.

It's easy to forget how superb the Met Chorus is, both in vocal skills and movement. They were clearly at their best in this performance.