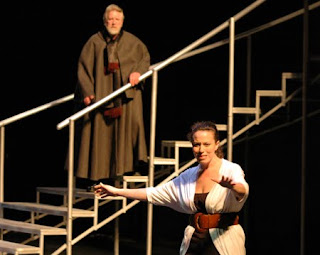 Last night at the Mondavi Center was my third live Bluebeard's Castle since starting this blog. The first was at the Washington National Opera and starred Samuel Ramey and Denyce Graves. The second was at the Berkeley Opera and starred a giant computer screen.  Both of my previous Bluebeards made elaborate choices about what to show when the doors were opened. The drama shifted to these pictures.

Opera News once designated the libretto for Bluebeard as one of the best ever. Huh? First I would like to say that Judith is an idiot. I don't tend to go for operas where the main female character is an idiot. I guess I tend to prefer stories that actually imply some action. Here we just have a castle, seven doors which are opened one by one, and the idiot Judith.

The Davis production made some pretty interesting choices. Judith arrives in her wedding dress.  This tells us exactly where we are in the story. The dialog seems to say only that they have arrived at the castle and that she is leaving her family behind.

On either side of the stage at the Mondavi Center are doors, and these doors became two of the seven doors. That meant that the set required only five doors.

Thomas Munn, formerly the lighting designer for the San Francisco Opera, works now at UC Davis and designed the lighting here. The solution to the problem of what we see when each door is opened is lighting. Colored lights shine out of each door in turn and Judith describes what she sees.  The drama shifts back to the people.

Only when the seventh door opens does anything come out: Bluebeard's three previous wives still in their wedding dresses. They look like zombies, and Judith immediately turns into a fourth zombie and goes into the room with them.

The star of this opera is always Béla Bartók’s score.  I felt the orchestra was occasionally much too loud, covering the singers, but otherwise played well.  It seems different each time I hear it.  Bartók was a musicologist who collected Hungarian folk music, and therefore his music is always said to sound like Hungarian folk music. We have never heard any Hungarian folk music and will have to take their word for it. I always hear early modernism, ethnic only in the absence of German Romanticism but still carrying the burden of the classical orchestra.

The program notes point out the unusual writing for voices, always eight syllables per line with generally descending phrases, and no hint of ornamentation. Gregory Stapp as Bluebeard was ominous and imposing, but also sometimes out of tune. Jessica Medoff seemed to have just the right voice, manner and aura of arrogant youth for the idiot Judith.