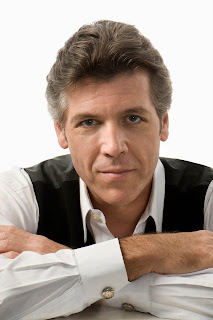 Gustav Mahler is a priority. The range of issues that Thomas Hampson touched on in conversation with our colleague Dr. Thomas Baltensweiler reaches from the Hamburg Elbphilharmonie to Verdi plans. Excerpts from the interview.

2010 marks the 150th Anniversary of the birth of Gustav Mahler, in 2011 follows the 100th anniversary of his death. You have made this the occasion for a new recording of "Des Knaben Wunderhorn," the cycle you have already recorded with Geoffrey Parsons on CD. Why now again?

With Geoffrey Parsons I had recorded the world premiere of the piano version. That was in 1993. The orchestral version I've never recorded commercially. For the Mahler year I wanted to do something special. This has brought me to the idea of recording the cycle with the Vienna Virtuosi, with whom I had already been on tour. The Vienna Virtuosi are a chamber ensemble without a conductor. Mahler wrote, "Des Knaben Wunderhorn" should be played in a "chamber sound." Certainly, such a "chamber sound" is not dependent on the number of instrumentalists, and a large orchestra can create intimacy. The name probably means above all that the instruments are as important as what the singer sings. That does not mean that a chamber orchestra should play the music, especially a contemporary chamber orchestra that is different from one of Mahler’s time. With the Vienna Virtuosi I have – in order to come to this particular project - experimented, how many musicians a recording of this cycle really needs. We have adhered closely to Mahler's musical instrument list and we dealt strongly with the particular iconographic significance of the instruments, such as the harp, which refers to the afterlife. I have produced the album myself and given the license over to Deutsche Grammophon.

Your song recordings are also often unconventional in the choice of program, I think for example of your album "I Hear America Singing". How would you describe your approach in practice in the compilation of a program?

The selection of songs that I want to sing from the many that exist is purely subjective. In the American songs project I focused on American and European composers that have set American poetry to music or have been Americans. I have created a network that shows how a nascent American culture has unfolded in stages. The aim was to tell something about America. To seek the American Schubert would certainly have failed; I tried to capture the spirit of various decades, rather than to look through the eyes of a single composer.

In Hamburg, in a large-scale cooperation between tour operators and orchestras 2010/2011 Mahler's complete works are to be performed. It is marketed under the label "Elbe Philharmonic Hall,” a building that is still not completed. They will interpret in this context the complete Mahler Lieder. How did this commitment happen?

With the Intendant Christoph Lieben-Seutter I share a long-standing friendship. I have already experienced "Mahler residences" elsewhere, as in Vienna, and the mid-1990s I sang in Amsterdam every Mahler song. Certainly behind the concept of "artist in residence” stands a commercial interest, because you can put together an interesting "series." Hamburg is one of those: Here you can hear all the songs with piano and most with orchestra, and this is very enlightening.

You are also still active on the operatic stage, currently your debut in Zurich's "I Masnadieri" stands on the program, an early masterpiece by Verdi with music that seems to be elemental in its power but in contrast to the subtlety of the art song. What attracts you to such a role?

When you talk about Thomas Hampson, one can say nothing more than a lyric baritone with dramatic abilities. Purely technically I need with such a role to pay close attention to myself. But song and opera are not so close to each other. One can indeed focus on one of the two, but if you sing both, you become better. The song is not a specialist sanctuary, and the idea that one speaks a song with certain sounds does not correspond to my idea of singing.

You have recently taken up Scarpia in your repertoire, there the orchestra brings out the heavy artillery!

Yes, but with Scarpia I would always think what kind of house will I sing the part in. I love the character of Scarpia. His intelligence and sophistication, with its concomitant malignancy, which is never vulgar, is an acting and vocal challenge. In a singing career like mine often after a “heavy” role comes again “light,” and after light again heavier. So for example, after my first Posa [Rodrigo in Don Carlo?] I embodied again the "Barbiere -Figaro, who I respect very much not only for his comedy, but also his wisdom. It would be very appealing to me to sing again the barber.

Which brings us to your opera plans.


Next season is the new Iago in "Otello" at the Zurich Opera House. I have performed in the last 26 years, each season in Zurich, where I now have an apartment again. I was nowhere else as regularly heard over such a long period of time. I have also sung in this house many of my premiere roles. Now I'm looking forward to another role debut - my first Iago.

[This is translated from the online version of Opernglas.]
Posted by Dr.B at 4:19 PM