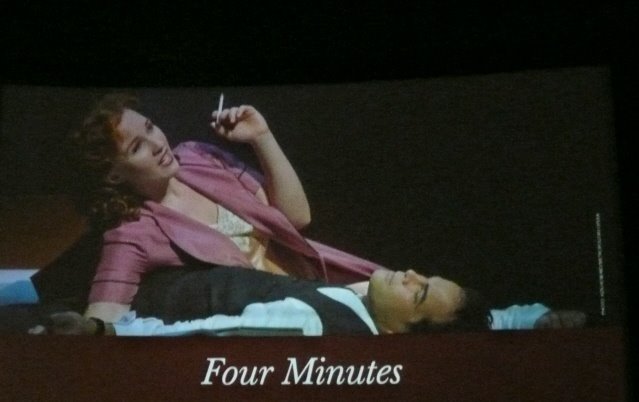 I panned Doctor Atomic when I first saw it in San Francisco. I hated the fact that a bomb hanging in the air seemed to be all it was about. Even more I hated the emptiness of the second act. The SF production was by Peter Sellars.

Sellars is also the librettist for Doctor Atomic, and he and John Adams have worked over the second act considerably. People keep talking practically to the end now.

The Metropolitan Opera production, by Penny Woolcock, is far more interesting. There's still a bomb hanging in the air, but it is tucked back out of the way except when referred to. She kept people in proximity who might be supposed to be talking to one another--what a concept. The actors waiting for the blast, the "cloud flower," put on their dark glasses, and at the end there is a white flash of light, followed by the sound of someone speaking in Japanese asking for water. There is a definite sense of having reached the end of the opera, something completely missing in the version put on in San Francisco.

I think the closeups of the HD broadcast also helped make the opera dramatically more interesting. Video design was by Leo Warner and Mark Grimmer. Alan Gilbert, an American and the new conductor of the New York Philharmonic, ably conducted.

Gerald Finley who sang Dr. Oppenheimer did not take any bows, unless I was so distracted I completely missed them. I remember Sasha Cooke who sang Kitty (very nice), followed by John Adams, followed by nothing. Finley would have come between them, I would have thought. I thought this represented an excess of self-criticism. He was not in ideal voice but sounded fine. The role is not easy to sing. I recommend that he drop it from his repertoire.

I liked very much the Pasqualita of Meredith Arwady. I always watch for Thomas Glenn who sang Robert Wilson again. No one is going to make their career from singing in Doctor Atomic, but in general the singing was enjoyable, with lots of pleasant coloratura, especially for Kitty and Pasqualita.

I took away the impression that the entire staff at Los Alamos was slightly wacky. Edward Teller has long been a personal favorite for general insanity. The opera is an improvement over the San Francisco version, but I feel like I've seen it enough. Is it a great opera? It has edged toward being an opera at all, but not far. No amount of beefing up the parts of Mrs. Oppenheimer and her maid will make this a chick flick. A real opera on this subject would be about extramarital sex at Los Alamos. It's better, but it's still pretty much a yawner.

Disturbing comment by John Adams in the intermission: Dr. Oppenheimer was more cultured than Aristotle. Huh? I don't know that cultured is precisely the word I would have used to describe Aristotle.
#ad

I went to the movies on Saturday really wanting to like "Doctor Atomic." Finley is a terrific singer, and I found the sets very interesting. The backdrop action (chorus) added a great deal to the feeling of urgency, and the libretto offered a feeling of caring about the characters.

However, I hated the music. Well, maybe -- no, it's "hated." I left at intermission with that gawd-awful baritone aria ringing in my ears. My wife said it best: "Adams is worse than Britten." Thankfully I had a CD of Donizetti's "Lucrezia Borgia" in my car, which I listened to all the way home from the theater.

I loved it. I loved the SF production as well. My husband and our two sons were in the same boat. (My husband went twice to SF Opera's production.)

I could swear I saw Finley take a bow ... guess if I return on November 19 I'll pay careful attention to see if I am just imagining this. (Never in my career have I seen anyone refuse to take a bow if that performer is unhappy with his or her work; that's considered in very poor taste and horribly unprofessional. I guess that might happen, but I've sure not seen it!)

We also own the DVD of the Netherlands production; it's the Sellars version. (With Finley again.) I've yet to watch it ... too busy! ... but I look forward to it.

I guess we all have our own ideas about what is good and what isn't, eh? I'm just an oboist ... maybe that's the explanation of my liking it so much. ;-)

Lots of people liked it. All my opera friends liked it. I expected Finley to bow just before Adams, since he is the star, and that didn't happen. I admit my mind wanders on occasion.