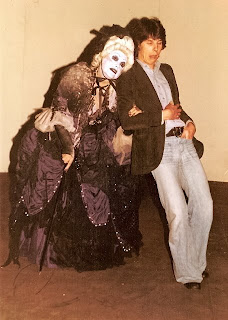 Here I discussed my favorite production from my time at the Ulmer Theater--the one with caskets and dead people, sort of the haunted house Nozze di Figaro. Well, that was Peter Mussbach, now something of a person in German opera. Above is a picture of him with one of the ghosts from the Figaro production. My Swiss friend who sang Susanna in this production told me he had given up medicine for a career in opera.

He has gotten into conflict with Daniel Barenboim and gotten himself kicked out of the Berlin Opera. 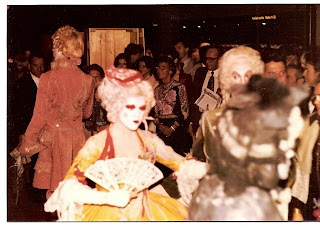 These are the walking dead arisen from their caskets--one of the caskets can be seen in the background--surrounded by members of the audience. I was allowed to go watch them and take pictures as long as I was not in costume.

Question: Did he actually invent Eurotrash?
Posted by Dr.B at 8:18 PM

The production was a total gas. They stood up the coffins and then opened them up and the ghosts just stood there for a good five to ten minutes. The audience is looking at them frozen there trying to figure out what the heck is going on. Are they alive? Who are they? What are they doing? And then they start to move and everyone GASPS. The fact that I knew all the people in the coffins made it a total hoot, like I was the only person in the room in on the joke.

They way he continued the line into the opera was really neat too. As someone who'd never seen it before, being nine, it was a great way to draw people into the music.