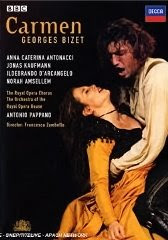 Carmen, 1876, is the precursor to Italian Verismo that started in 1890 with Mascagni's Cavalleria Rusticana. All the characters are from the lower classes, and violence is a prominent feature. Carmen is a modern woman who praises the virtues of liberté, a woman who chooses her lovers and warns them to beware of her love, to regarde a toi.

We may well wonder why she chooses the timid good boy Don Jose when she could have anyone. Jonas Kaufmann completely personifies Jose, and provides in his good looks a possible reason why the wild and crazy Carmen should want him. She picks him because he is the only man there who is not pleading for her affection, who seems not even to notice her. She intuits his inner turmoil, throws the flower at him, and he says he feels as though he were shot by a bullet. We cannot guess what Jonas may be like, he so completely disappears into the role.

During the third act he rappels down a wall with the aid of a rope. Can your tenor do that?

The contrast between this Carmen and the Zurich version with Kasarova could not be greater. Kasarova acts with her shoulders while Anna Caterina Antonacci uses her whole body. This version has a credit for the person who stages the fights. Whoa! There is a terrific knife fight between Escamillo, here played by Ildebrando d'Arcangello, and Don Jose. And in the final act Carmen and Don Jose get down on the floor and wrestle around quite a lot.

The opera begins with a staged scene during the Prelude of Don Jose being taken off to his execution. This sort of thing, staging of scenes during the overtures of operas, is verging on cliche.

The world wasn't ready for Carmen when it opened, but we are definitely ready for such a physical, intense, well sung and sexy Carmen. Highly recommended.
#ad