The Gospel of Mary Magdalene 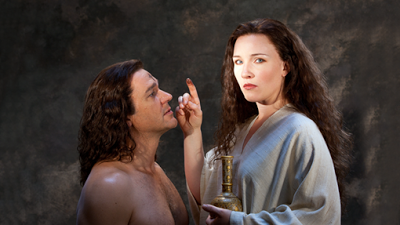 I'm going to try to write about Mark Adamo's The Gospel of Mary Magdalene opera which had its world premiere last night at the San Francisco Opera.  It's not going to be easy.

The premise of this opera seems to be, "What if Jesus were an ordinary person with an ordinary life?"  What if his life were like a soap opera with people hurling accusations back and forth?  What if people shouted "bastard" at him in the street?  And most important:  what if he were obsessed with sex like all other men his age?

My brain immediately leaps to the next question, "Why would I care?"  If Jesus is just an ordinary person, why write an opera about him?  The content of his ministry--the Kingdom of God--was completely missing from the opera.  This Jesus was pretty lame.  "Nothing good ever came out of Nazareth."

I like reading all these relatively recently discovered gospels, too.  My mind formed a different picture.  What would be interesting to me about Mary as a disciple would be her interactions with the other disciples, her intellectual relationship to Jesus.  We only see Peter with whom she is constantly arguing.  Peter wants to overthrow the Romans, something I don't recall from any of the source materials.  It would take a lot more than 12 disciples to overthrow the Romans.

In our opera Jesus comes with an already existing wife named Tamar.  This is what makes Mary a prostitute. I liked the way he called her "Magdalene," and she would say back "Nazarene." I liked that Jesus' brothers appear with his mother.  I did not like the reference that the Romans turned Jesus over to the Jews for execution.  Crucifixion is a Roman method of execution, not a Jewish one.  He doesn't rise from the dead.  One could go on and on, but this seems like enough theological arguing.

Citations telling what book a sentence came from appeared on the supertitles.  The screen must be moved back up on to the proscenium.  When it hangs down below the proscenium, the lighting from the stage makes the titles very difficult to read.  This is the most trouble I have ever had reading supertitles in this very wordy opera.  [I notice the curtain was behind the supertitles in Cosi.  This worked much better.]

Sasha Cooke made her SFO debut as Mary Magdalene.  She was seen previously as Oppenheimer's wife in Doctor Atomic from the Met.  A very fine singer, she makes it all seem quite lyrical.

William Burden as Peter was very powerful and dynamic.  He would be by far the more logical person to crucify.  Nathan Gunn as Jesus was wimpy.  Maria Kanyova as Miriam, Jesus' mother, was also very assertive.  Only the two main characters seemed to be far more passive than was desirable.

At the end I was fascinated by a strange sound from the orchestra.  I sit where I can see down into the orchestra, where I saw two people bowing with violin bows on the blocks on a marimba.  How do people think of these things?

The music improved in the second act, but not enough.

glad to see you blog on this. reviewers have been all over the place--but mainly trying to like the opera and failing; so I kept thinking, what is BB going to make of it? Agree with almost all that you wrote--except we thought Miriam wasn't all that strong (a singer, that is); seems to be general agreement that Sasha Cooke was the best thing about it. this should have been a great opera; doubt Adamo will ever get a chance to improve it. So it goes. (PS I thought the anacronysms in the libretto--you cite one; other friends have cited other ones--were really jolting.

What were the other anachronisms? It all seemed quite pointless.

...I don't remember right now...considering reading down the libretto (said to be on SFO's website), may not invest the energy however.
One positive thing (maybe) about the project: made me want to read the non-canonical gospels (see above remark re:energy)
As to bowing on the percussion instruments, I'm reminded of I think it was Lily Tomlin's line, that she feared whoever thought up Musack may be thinking up something else...but it was a cool effect, no question.