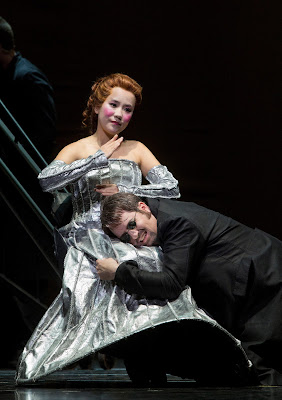 Poor Hoffmann, our hero in Jacques Offenbach's Les Contes d'Hoffmann currently in rotation at the San Francisco Opera.  He has this muse/tormentor who follows him around and messes up all his relationships with women.  On the way he kills a couple of people and loses his reflection.  I would think that not having a reflection would make shaving difficult.  It's still an incredibly fun opera.

I don't know what to think of the staging.  All that black and gray is pretty depressing.  In the Venetian scene we were relieved to see some green on the stage.  However, I felt that this constantly moving and changing set, literally constantly moving in parts of the Giulietta scene, made the action absolutely clear in this complex drama.

The singing was much better in the actual performance than it had been in the rehearsal.  I knew this and did not comment about the performances.  Matthew Polenzani was our desolate, drunken poet who charms women with his words.  I liked him a lot.  He spent a lot of his time lying drunk on the floor but managed to remain lovable in spite of it.

I enjoyed Natalie Dessay's performance of Antonia. Above is a film from Barcelona of Natalie as Antonia in our production with a different tenor. Natalie has announced her retirement from opera, and this is her next to last appearance. We are grateful to have seen her and hope that someday she will return.

Angela Brower as Nicklausse was also excellent.  A double was used to facilitate the quick changes from her female muse attire to her male student.  This worked well.

Natalie made a very low bow in front of Patrick Fournillier, the capable French conductor.   It was fun even the second time.
Posted by Dr.B at 8:55 AM