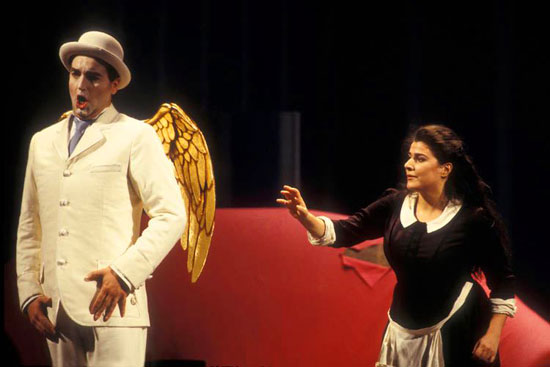 I am cataloging my opera video collection, and hidden out of view on the same tape as Previn's A Streetcar Named Desire I found Cecilia Bartoli's performance in the Metropolitan Opera production of La Cenerentola in 1997.  I am doing Cecilia right now, so it seems suitable to write something about it.  It is important to know that this is the first time La Cenerentola played at the Met.

I don't know what I could have been thinking when I wrote of the performance by Elina Garanča here that I had probably never seen the production before.  I must surely have seen this tape of it.

I had also almost forgotten the dynamo Bartoli.  Where Elina goes cautiously up and down the stairs on the wedding cake, Cecilia runs up and down them with complete abandon.  Her father hits her and throws her around the stage.  The whole production makes a remarkably different impression than it does with Elina.

The cast is superb.  Alessandro Corbelli made his Met debut as Dandini, and never have I seen such a perfect Dandini.  It's almost a shame that he can't sing Dandini and Don Magnifico in the same production.  Vargas has gone on from being the magnificent Rossini tenor he is here.  He and Cecilia make a well-matched couple.  And Michele Pertusi, looking very young, is the definitive Alidoro, even having golden wings (Alidoro means golden wings.)

A book was written about this.  Cecilia wows with her wonderful singing and great charm.  Questo cor piu mio non e.

You can watch this streamed from the Metropolitan Opera on Demand.

I also have a tape of the Houston performance a couple of years earlier in 1995.  This production was filmed to preserve the production which originated in Bologna.  If you love Cecilia, she is better here.  If you love old fashioned productions, this is for you.  Corbelli and Pertusi are better at the Met.  I'm glad I don't have to choose.

In my collection is also a version with Ann Murray. Now I must say I am Cenerentolaed out.
#ad

I have a few obscure operas on CD where Alaimo takes on the respective title roles (Donizetti's "Torquatto Tasso" plus "L'ebreo" by Giuseppe Apolloni, both on the Bongiovanni label) and he is excellent. I never knew he sang at the Met, although I'm fairly certain it couldn't have involved too many appearances.

The Met archive shows 77 performances for a Simone Alaimo. He was in a few operas in SF, too.