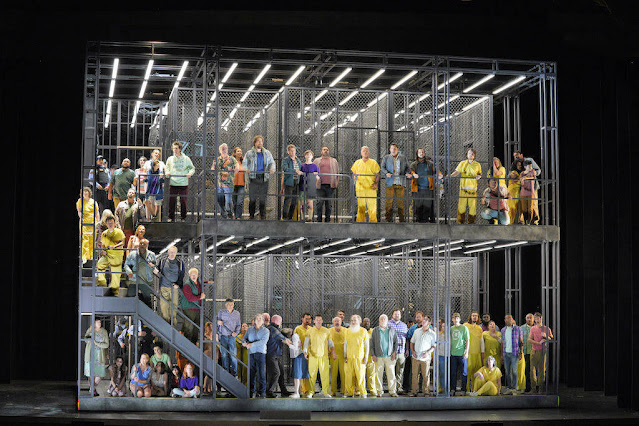 Last night I attended the premier of a new production of Beethoven's Fidelio at the San Francisco Opera.  I'm going to work my way slowly through the production before going on to the music.

The single set is shown above.  It can be rotated, and the other side shows different spaces.  In Act II it looks different from Act I.  In Act I the back of the side presenting to us is covered with mirrors.  The director always sits in the middle of the orchestra to view his creation, but from my seat in the balcony circle the lights from the pit reflect in the mirrors to create a tremendous distraction.  The screens which drop down in the balcony are back, and they are shot from a lower angle which doesn't show the reflection.  I watched the screens.  [More about the screens later.]  No director ever seems to think of walking around the house to see what it looks like from other places.

Much of the drama of this production is created through costumes.  It's regie of course.  The last person in the upper left above might be Leonora dressed as a prison guard. 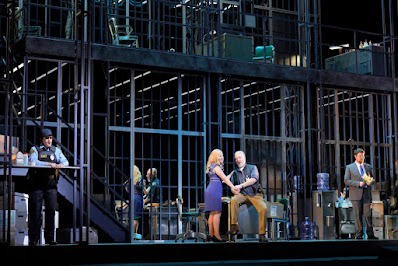 This will give you a better idea.  Left is Leonora, then Marzelline, then Rocco and last Jaquino.  It's probably the canon quartet.  Each of these people has a different role to play.  Leonora is in her guard's uniform.  Jaquino is wearing a business suit and Marzelline is wearing upscale office attire.  They seem to work in an office section of the prison.  Rocco who is supposed to be the boss is dressed no better than the prisoners without a uniform.  Jaquino is someone I have always seen as a flunky, so why is he in a business suit?  And why does Rocco look like a janitor?  I'm very confused.  This production does not give any clues about why Marzelline would prefer Fidelio.  The yellow outfits above are prisoners.

The one thing that makes Fidelio hard to stage is that in Act II while appearing to be still in the dungeon where Florestan has been hidden, there suddenly appears a fair sized mixed chorus to celebrate Leonora's rescue of Florestan [which she here accomplishes with a gun].  Until that point Leonora and Marzelline are the only women in the opera.  In this production the women are in the prison with their men and appear at the end when their men are released.  This sort of makes sense.

Enough about the production.  This was my first experience of our new conductor Eun Sun Kim.  She kept good tempos and maintained a suitable balance between the singers and the orchestra, things that make or break a performance.  The chorus was its usual spectacular self.

Russell Thomas sang a magnificent Florestan.  Greer Grimsley makes a good villain.  The make or break character is, of course, Leonora/Fidelio, here sung by Elza van den Heever.  She cried in the applause which was warm.  Everyone is so emotional about being back.  Elza, I hope you enjoyed your performance.

Which brings us back to the screens.  The San Francisco Opera is now offering live streams of its performances.  Streams require cameras, undoubtedly the same cameras that brought us the pictures on the screens that hang down in the balcony.  In addition streams bring money.  This makes me happy.  If you are unfamiliar with the San Francisco Opera, it provides a quality product.

We’ve been thinking about and discussing your comment that directors sit in the orchestra (section of the house) and…you do have a good point.
When we moved, at SF Opera, from Balcony Circle to the main floor—a dozen rows back from the orchestra pit, more or less—we were somewhat startled to see how much small-scale business especially the chorus does; and the number of little props that are employed….things we hadn’t seen from farther away.
But that’s grand opera aesthetic, isn’t it?—endless, minute attention to details (stitching on a costume, period-appropriate jewelry and on and on) that are, essentially, invisible. No wonder the art form can cost so much….
In a way, this is a function of the sizes of the halls, especially venues like the War Memorial Opera and the Metropolitan Opera. Companies like West Edge, Onsite and Opera Parallèle (and for that matter Merola) play smaller places where there isn’t the differentiation….

as we watched this show last night (20 October), I got to thinking about your costume questions, above ("Rocco who is supposed to be the boss is dressed no better than the prisoners without a uniform. Jaquino is someone I have always seen as a flunky, so why is he in a business suit? And why does Rocco look like a janitor?")
my guess at answers is....
Rocco is burned out. he's been in a dead-end job, working for a boss he hates, far too long and doesn't give a fuck anymore. so he throws on his going-fishing clothes when it's time to go to work.
Jaquino is a young man on the make--he's dressing not like his boss, but like his boss's boss (isn't that what corporate climbers are advised to do? or at least used to be?)...in a tailored but not particularly good suit, modelling himself on Don Pizarro.)

Margaret just pointed out--my Better Half--that when Don Fernando comes in at the end, the production has him in a really good suit that fits and moves with him perfectly, so he never unbuttons it....