2013 for me was the year of Anja Harteros. Before that I posted nothing about her. When I went to Munich to see Lohengrin in 2009, I remember the soprano was not Anja. Watching the film of Lohengrin may have been my first experience of her.

She is a German of Greek extraction. My impression of her from the interview I translated of Jonas and her together is that she is possibly funny.  Meaning humorous and cheerful. You might possibly believe it of her that she would deliberately play off her long curly-haired resemblance to Cecilia Bartoli at the Cardiff Singer of the World competition, which she won. 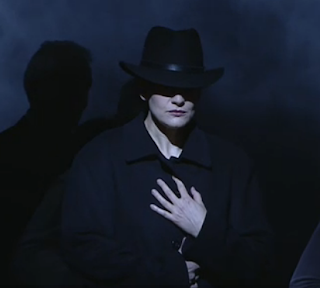 She will never be the rock star celebrity that Anna Netrebko is, but her growth into a Verdi singer has been completely organic.  Her natural lyric soprano voice expands into dramatic intensity with almost no discernible change in color or production.  The voice never disintegrates into distortion which so often happens with Verdi.  She never seems to be trying to sound suitable for Verdi--she just is.  She opens her throat and out it comes.  Your heart does not hesitate to soar with her.  I only recall Eileen Farrell who could do this equally well.

The Italians, of course, would not approve.  Jonas and Anja are attempting to convince us that Verdi was a German, too.  The Italians will not be convinced.  They both seem to feel with the music without having any intuitive inclination to scoop.  For me if the drama of the phrase carries seamlessly, I simply don't notice.  My heart wants only to stay in the phrase to the end.

The roles I have heard are Elsa, Leonora (Trovatore), Leonora (Forza), and Elisabetta, all with Jonas Kaufmann.  She's doing Tosca and Simon Boccanegra later this year.  It's interesting to me that I accept her more as a Verdi singer than as a Strauss singer.  She seems most effective in the large gestures, the sweeping landscapes.  I cannot help wondering if she saw what a giant leap this Verdi year would be in her career.  If it was planned, it was a master stroke.  Congratulations.

I don't get the impression that New York is seeking her out.  They are busy promoting Sondra.  I feel very pleased to have someone new to feel enthusiastic about.

Doc, Gelb was/is very much interested in Harteros but she turned him down. In fact this Forza with her and Jonas was even penciled in for thethat Met at one point. But Harteros' husband is elderly and frail, so she is staying close to home.

I loved Anja and Jonas in Don Carlo, Lohengrin and this Forza.( I would kill to hear her in house.) I don't understand those who criticize her for coldness and a lack of passion. For me, there is nothing lacking - the passion is there in the voice and phrasing. I've heard criticism of her intonation, and there have been a few times when I've heard her sing slightly sharp, but that rarely. Not a problem IMO.

Thank you for the translation of Anja'sand Jonas' interview. (Between my limited German and Google it was a bit of a slog.) She does indeed seem to have a sense of humor and I loved it when she teased Jonas. It's not just that JK wants the last word, the man thinks and talks in paragraphs...there is quite a busy brain beneath those curls.

It's nice to work at home. I can sympathize. Perhaps some day I will get to hear her live.
With Jonas I am live in Fidelio, Werther, Walkuere, Lohengrin and in recital.
Don Carlo was the best. I also don't hear the lack of passion. Perhaps distortion means passion to them.

I heard her together with Kaufmann in Forza here in Munich,both were a great disapontment for me and both are definitivly not verdian singers.Harteros singing ist cold and without any passion.Someone mentioned here Sondra Radwanovsk.She is just the opposit to Harteros and i was so lucky to hear her Norma here in Munich.She was fantastic,incredible,warm,passionate just as opera schould be and i went home that night happy.

Since posting this I have seen Anja in Tosca from Vienna, Andrea Chenier from Munich, Un Ballo in Maschera from Munich, and Arabella from Munich. I think Arabella was my favorite.