Which new operas will last 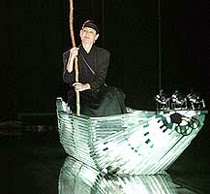 Please forgive my taste for lists.  I maintain a list of operas for all sorts of purposes, and this piece is everything since Einstein.  The operas included in my list come from a variety of sources, but do not cover everything.

The New York Times classical music reviewers have issued their own take on new operas of lasting significance here.  We did something similar at a party I attended last month.  Their starting point was Einstein on the Beach, generally considered the musical milestone that separates the present from the past.  They considered all the places where New York Times critics fly to.   Our starting point was 2000, and the operas to be considered were only those presented in the San Francisco Bay Area.  The Times operas are in bold, and ours have -SF.  * Identifies those I have seen.


The first thing you should notice is the absolute lack of any overlap between the two lists.  Apparently New York Times critics do not fly to the west cost of the United States, very much preferring London.

You should also notice right away something else interesting about the list from the New York Times:  George Benjamin, Peter Maxwell Davies, Thomas Ades, Mark-Anthony Turnage, Judith Weir, and Harrison Birtwistle are all British.  Hmmm.  Robert Ashley, David T. Little, Lowell Liebermann, John Adams and Philip Glass are Americans.  Kaija Saariaho is the only composer from a non-English speaking country.

I became curious about an opera about Anna Nicole Smith and have the DVD.  It's extremely entertaining if not exactly what you would call significant.  I no longer remember what led me to see L'Amour de Loin, but it is also on DVD.  I agree with them that this is a very important opera, but if you don't have Dawn Upshaw and Gerald Finley to sing it, then what?

Satyagraha and The Death of Klinghoffer have played at the San Francisco Opera, and The Tempest was simulcast from the Met. I saw A Night at the Chinese Opera in a student production while I was in London. The rest are unknown to me.

I've seen all three of John Adams' major operas, Nixon, Klinghoffer, and Dr. Atomic, and I thought Klinghoffer was the least interesting.  Why would anyone want to see an opera about terrorists killing an old man in a wheelchair?  I found it disgusting.  I liked very much the idea of Nixon and Mao talking at each other and understanding not one thing the other said.  This was very entertaining, as was the nutso Madama Mao and the comic genius Kissinger.  I like politics as comedy, I guess.  There is definitely nothing funny about Klinghoffer.  Europeans like operas with political content whether or not the music is particularly interesting.  So are we to allow Europeans to decide for us?

So I would say that I agree with about half of their choices.  Satyagraha is wonderful.  I still like Orphee.

The things not considered by the New York Times critics were probably more interesting than those that were.  For instance, Saint-François d'Assise by Olivier Messiaen falls within their boundaries.  I don't know what I would predict for it, but it is a towering and spectacular work.

Anything by Jake Heggie is not important for them, including his masterpieces Dead Man Walking and Moby-Dick.  I found both of these very moving.  Golijov's Ainadamar may or may not be classical music, but it's the most musically exciting of anything in the list.  My friends liked these three operas.

The problem with all of them is that you wouldn't go to any of them to hear the singing.

Very useful list. Of these, I very much like Written on Skin - very powerful and gorgeous; the haunting L'Amour de Loin; disturbing but fascinating The Minotaur,and the hypnotic Akhnaten. I recommend the film of Death of Klinghoffer, but it is extremely harrowing.

It did make me feel there were operas I should look into, mainly two you have mentioned.